Guest Blog by Tom Doyle - The Machine Stops: Avoiding the Singularity in My Science Fiction Novel

Please welcome Tom Doyle to The Qwillery. Tom is the author of the American Craft trilogy. Border Crosser, his most recent novel, will be published on October 1, 2020. 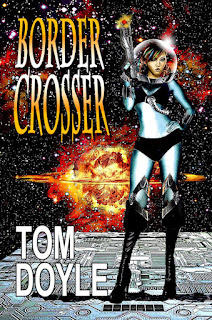 The Machine Stops: Avoiding the Singularity in My Science
Fiction Novel
My new novel, Border Crosser, takes place centuries from now when humanity has spread out among the stars. But even in this distant future of miraculous technologies, the story’s secret agent heroine, Eris, has borderline personality disorder with a severe emotional amnesia component. This means that, though she remembers facts quite clearly, she has difficulty remembering how she felt previously about those facts, and thus can swing wildly from love to hate and back again.
The persistence of untreated personality disorders isn’t the only incongruous feature of this far future. Humanity has banned human-like AI and has limited life-extension to two centuries. In other words, the progress of posthumanism and the technological singularity has in certain respects halted.
To explain why I’ve presented the future this way, I’m going to discuss the ways I and other science fiction authors deal with technological change in the far future. The bottom line is that, in one way or another, we all cheat, at least a little.
In Border Crosser, the break in our use of posthuman technologies comes when we develop human-like artificial intelligences, setting off a hard singularity scenario. In typical science fiction fashion, the AIs attempt to take over. We prevail, but only by the skin of our teeth.
One of the ways the AIs exerted power was through very intimate and thorough psychological control of their human populations, so Eris’s nickname for this past conflict is “the Psych Wars.” When after these Wars humanity decides to ban a whole spectrum of posthuman technologies and psychological treatments, the so-called Psych Laws are born.
My primary reason for this worldbuilding is that I wanted to tell a story in a space opera setting about borderline personality characters whose conditions remained untreated. But in doing that, I, like many authors before me, was dodging the singularity.
Some believe that there’s no choice for SF authors but to dodge it. The Wikipedia definition of the technological singularity is “a hypothetical point in time at which technological growth becomes uncontrollable and irreversible, resulting in unforeseeable changes to human civilization.” It’s the “unforeseeable” part that’s a particular problem. In many descriptions of the singularity, the period after that point of accelerating change is considered unimaginable to humans in the present day in the same way that an australopithecine couldn’t imagine our world. So, by definition, authors are inadequate to the task of writing about it, and many SF authors seem to focus on the near future for that reason.
This seems to me a cop out, but let’s say this version of the singularity is correct. Then perhaps the singularity isn’t going to happen? But that leads us to an implicit assumption in the definition above: a deterministic view of technological change. Even though the singularity supposedly marks a point no return, such a deterministic view means that our path toward that point is already inevitable. Any group that doesn’t adopt advanced technologies is put at an economic and military disadvantage to those that do, which eventually becomes a cultural survival disadvantage. Attempts at enforcement of any particular ban consistently break down in the face of these pressures.
One response to the apparent inevitability of posthumanism is to simply ignore it, as in the series bible for the original Star Trek:

“But projecting the advanced capabilities of your starship, wouldn’t man at time have drastically altered such needs as food, physical love, sleep, etc.?
Probably. But if we did it, it would be at the cost of so dehumanizing the STAR TREK characters that only a small fraction of the television audience would be interested, and the great percentage of viewers might even be repulsed.”

This strategy of ignoring the issue seems to work in a lot of popular entertainment in a way that wouldn’t, for example, in a hard SF short story.
But perhaps a deterministic view of technological change misses all the ways that culture both explicitly and unconsciously steers toward certain technologies and away from others. In Seveneves, Neal Stephenson refers to such cultural restraints as amishtics (after the Amish, who’ve decided not to use certain tech). Even minor differences in cultural preferences early could make large differences later.
Finally, a frequent strategy for far-future writing is to have the singularity/posthuman point reached and go so seriously wrong that technological change is reversed (contrary to the definition of the singularity) and no one is going to let it happen again. The Dune books have this with the Butlerian Jihad. It’s part of the backstory to the alternative technologies in David Louis Edelman’s Jump 225 trilogy. And even Star Trek has a nod to this with its Eugenics Wars. By adopting this strategy as well, I’m in good company.
Have I copped out? I’ve grumbled against other authors who’ve refused to imagine the far future because of the extent of change, so perhaps I should explore that horizon in some future book. But, as I said, the story I wanted to tell now was a combination of borderline personality and space opera. And most importantly, like much of SF it also has a lot to say about our present. Eris battles klept-oligarchs, theocrats, experts in genocide, human traffickers, and large-scale psychological manipulators. As much as I would’ve liked to imagine a world without such villains, it’s more important than ever for science fiction to also engage with the world as it is. 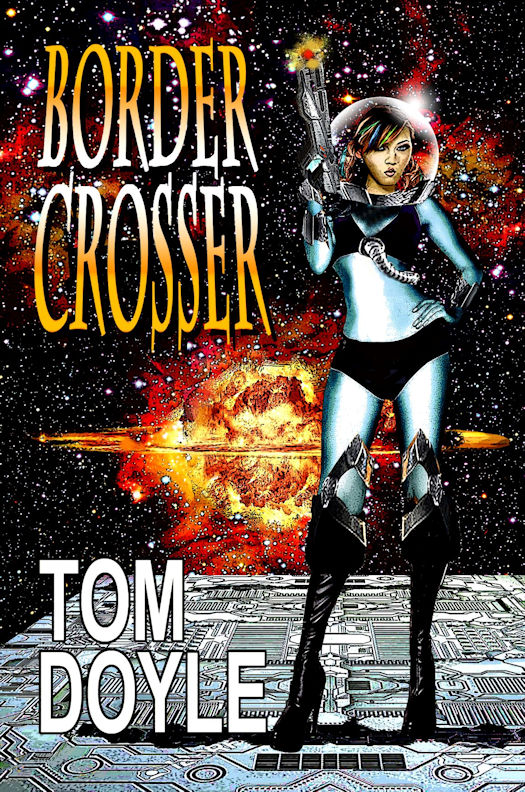 In a galaxy gone insane only a madwoman would fight for freedom.
Eris is a charismatic spy with a violent borderline personality and emotional amnesia--she doesn't remember her loyalties. This allows her to pass from world to world without mental scanners detecting her long-term intentions, making her a "border crosser."
The Asylum cabal has artificially amplified Eris's condition so that she'll cause interstellar chaos for the limited time she survives. When Eris discovers the Asylum's manipulation of her, she sets out to find its hidden leaders and destroy them.
From decadent old Earth to the frontier estates of Mars, Eris hunts her first quarry, the Asylum's architect of genocides. But when her chase leads her out to the stars, she discovers still deadlier dangers from humanity's past and her own. As she fights these galaxy-spanning nightmares, Eris must also struggle to recover her own mind.
As Eris would say, "The only thing necessary for interstellar evil to triumph is for brilliant and sexy killer me ever to stop, darling." 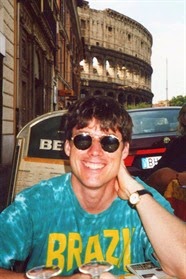 Tom Doyle’s latest novel, Border Crosser, tells the far-future adventures of Eris, a psychologically extreme secret agent whose shifting loyalties cause chaos wherever she goes in the galaxy.

Tom is also the author of the contemporary fantasy American Craft trilogy from Tor Books. In the first novel, American Craftsmen, two modern magician-soldiers fight their way through the legacies of Poe and Hawthorne as they attempt to destroy an undying evil--and not kill each other first. In the sequel, The Left-Hand Way, the craftsmen are hunters and hunted in a global race to save humanity from a new occult threat out of America's past. In the third book, War and Craft, it's Armageddon in Shangri-La, and the end of the world as we know it.

Tom has survived Harvard, Stanford, and cancer, and he writes in a spooky turret in Washington, DC. He is an award-winning writer of short science fiction and fantasy, and you can find the text and audio of many of his stories on his website.