Please welcome Doug Engstrom to The Qwillery as part of the 2020 Debut Author Challenge Interviews. Corporate Gunslinger is published on today, June 15th, by Harper Voyager.

Please join all of us at The Qwillery in wishing Doug a Happy Book Birthday! And if you love the cover of Corporate Gunslinger vote for it in the Cover Wars here. 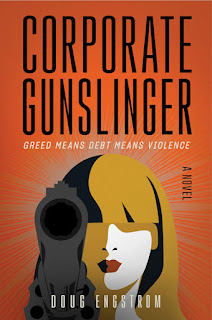 Doug:  When I was in about the fourth or fifth grade, I wrote a series of science fiction stories with my friends, in which we were all crew members on an “Intergalactic Cruiser.” Fortunately, I don’t remember much else about it.

Doug:  I think it’s a continuum rather than either/or, but I’m pretty far toward the plotter end of the spectrum. I start with a detailed scene-by-scene outline. However, I treat it like a project plan rather than a blueprint, which is to say that I will make changes — sometimes very large ones — as I write, and I use the outline to help me accommodate and integrate those changes. For example, if I move a scene that contains information used in later scenes, I can use the outline to see if I’m still giving this information at the right time, or if I need to find a different place to introduce it.

Doug:  Staying focused for long periods of time without an immediate, externally-enforceable deadline.

Doug:  Corporate Gunslinger was heavily influenced by David Graeber’s Debt: The First 5,000 Years, which basically upended the way I look at society and economics; also Mistakes Were Made (but Not by Me) by Carol Tavris and Elliot Aronson, which got me to think about the stories we tell ourselves to justify our actions; and Thinking Fast and Slow by Daniel Kahneman, which gave me a lot of insight into cognitive errors. Farah Mendlesohn’s book, The Pleasant Profession of Robert A. Heinlein, did a lot to make me conscious of how heavily I’m influenced by Heinlein, even though I’m mostly reacting against his politics.

Doug:  An actress becomes a gunfighter.

TQ:  Tell us something about Corporate Gunslinger that is not found in the book description.

Doug:  Though it’s a very grim story, it has touches of humor—there are some hijinks in the midst of all the death and mayhem.

TQ:  What inspired you to write Corporate Gunslinger?

Doug:  The book started out as one of a series of vignettes that purported to be an oral history of work in the mid-21st century, people talking about their jobs in the way they talked to Studs Terkel in Working. Except because it’s the mid-21st century, the jobs they’re describing are professions like “AI Wrangler” and “Theology Mixer.” Many of the vignettes directly or indirectly satirize trends in society, and “Corporate Gunfighter” was definitely one of those. The vignette format ultimately didn’t work out, but I liked the idea and the character, so I turned it into a longer format piece. Much longer, as it turned out.

TQ:  What sort of research did you do for Corporate Gunslinger?

Doug:  I did a lot of research on dueling codes and read accounts of duels, as well as a lot of reading on gunshot wounds and how firearms and bullets behave in different circumstances. Because I was writing women as main characters, I also spent a lot of time listening to women on panels at SF conventions and on social media as they talked about their expectations for female characters in the stories they read, and particularly the things that men tend to get wrong.

TQ:  Please tell us about the cover for Corporate Gunslinger.

Doug:  Yeon Kim created an amazing cover. The bright orange background attracts attention, the gun lets you know “gunslinger” isn’t metaphorical, and the stylized female image wielding it lets you know the protagonist isn’t who you might expect. Though the elements are relatively simple, they have terrific impact.

TQ:  In Corporate Gunslinger who was the easiest character to write and why? The hardest and why?

Doug:  Kira, the main character, was the hardest to write. As both the main character and the only point of view character, she has to carry the book, so she required a lot more depth and complexity, and it took me a number of tries to get her right. There was also the continuing challenge of her making morally repugnant choices, but remaining likable enough and understandable enough that readers sympathize with her predicament and care about what happens to her.

Diana, Kira's trainer, was the easiest. She came together without a lot of effort, in part because I set her up as Kira’s polar opposite in terms of temperament. That gave me Diana's basic orientation, and once I figured out the backstory that produced that temperament, I didn’t have to think very hard about any given situation before I knew how she’d behave.

TQ:  Does Corporate Gunslinger touch on any social issues?

Doug:  The book is, among other things, a political satire, so social issues are everywhere. There’s the effect of debt on individuals, our tendency to allow horrific outcomes to occur if they’re the result of a person’s “choice,” and selling grossly inequitable situations with the language of fairness and opportunity — to say nothing of our collective willingness to accept routine violence and prioritize the interest of corporations over the needs of people.

The biggest thing, though, is the question of how and why people participate in oppressive systems, and Kira’s story is a "case in point” I want people to think about.

TQ:  Give us one or two of your favorite non-spoilery quotes from Corporate Gunslinger.

“Don’t think the pretty girl won’t kill you.” — Kira, speaking to an opponent before a duel.


“It’s not what you know that keeps alive, baby girl. It’s what you can remember at the right time.” — Diana to Kira, after a brutally difficult training session.

Doug:  I’m working on several proposals. One is a thriller set in the same world as Corporate Gunslinger, about a tech support worker who finds someone is trying to get control of her companion AI, and is willing to kill her to do it. Another is an atompunk alternate history set in a version of the 1990’s that looks a lot like what we expected in 1970, except for the radical left-wing Christians taking over the asteroid belt. And finally, a fantasy about a seed company intern and an outcast fae getting caught up in a corrupt plot involving human executives and fae royalty. 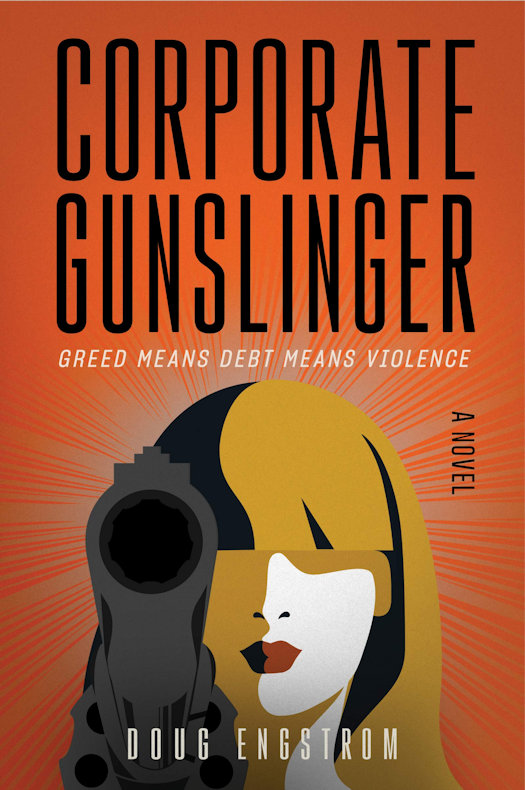 Doug Engstrom imagines a future all too terrifying—and all too possible—in this eerie, dystopic speculative fiction debut about corporate greed, debt slavery, and gun violence that is as intense and dark as Stephen King’s The Long Walk.

Like many Americans in the middle of the 21st century, aspiring actress Kira Clark is in debt. She financed her drama education with loans secured by a “lifetime services contract.” If she defaults, her creditors will control every aspect of her life. Behind on her payments and facing foreclosure, Kira reluctantly accepts a large signing bonus to become a corporate gunfighter for TKC Insurance. After a year of training, she will take her place on the dueling fields that have become the final, lethal stop in the American legal system.

Putting her MFA in acting to work, Kira takes on the persona of a cold, intimidating gunslinger known as “Death’s Angel.” But just as she becomes the most feared gunfighter in TKC’s stable, she’s severely wounded during a duel on live video, shattering her aura of invincibility. A series of devastating setbacks follow, forcing Kira to face the truth about her life and what she’s become.

When the opportunity to fight another professional for a huge purse arises, Kira sees it as a chance to buy a new life . . . or die trying.

Structured around a chilling duel, Corporate Gunslinger is a modern satire that forces us to confront the growing inequalities in our society and our penchant for guns and bloodshed, as well as offering a visceral look at where we may be heading—far sooner than we know. 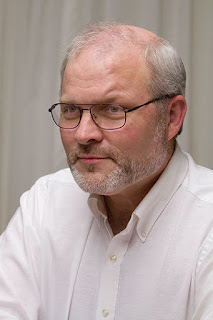 Doug Engstrom has been a farmer's son, a US Air Force officer, a technical writer, a computer support specialist, and a business analyst, as well as being a writer of speculative fiction. He lives near Des Moines, Iowa with his wife, Catherine Engstrom.