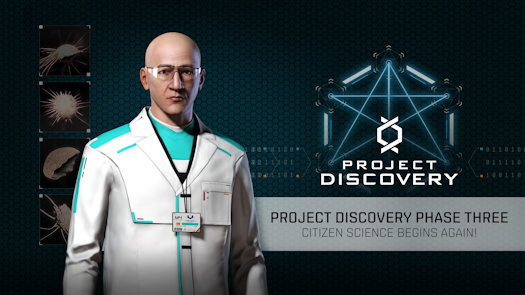 With the second-largest PLEX for GOOD collection of all time now having raised a staggering US $135,550 for the World Health Organization COVID-19 Solidarity Response Fund and the Johns Hopkins Center for Health Security (CHS), Project Discovery will embark on a major program to understand the immune system's response to the novel coronavirus. This follows two trailblazing previous phases that saw players mapping out the Human Protein Atlas in 2016 and searching for exoplanets in 2017.

In collaboration with scientists from McGill University, BC Cancer and front-line COVID-19 clinicians including Dr Andrea Cossarizza, a Professor of Immunology at the University of Modena and Reggio Emilia School of Medicine in Italy, players will be able to contribute to the fight against COVID-19 by analyzing data produced by flow cytometers. Flow cytometry is a technique used to detect and measure physical and chemical characteristics of cells, especially those of the immune system that are important in the body's response to infection with SARS-CoV-2, the strain of coronavirus that causes COVID-19.

Players can engage with Project Discovery in EVE Online via a mini-game in which they will use a tracing tool to mark groups of cell populations present in blood, thereby helping scientists in understanding how different cell populations and types are altered through infection. Players will also be rewarded for their participation with in-game content. Those logging in to EVE Online will find a detailed in-game tutorial for Project Discovery with full details of how to begin aiding the cause of real science.

“Since beginning Project Discovery we have seen our players band together as one to affect incredible change,” said Bergur Finnabogson, EVE Online’s Creative Director at CCP. “We are constantly reminded that the EVE community is like no other, we need only look at the recent PLEX for GOOD collection. With the third phase of Project Discovery, we’re thrilled to provide the tools enabling our players to once again work towards the betterment of humanity for the common good.”

“We created MMOS to connect scientific research and video games as a seamless gaming experience. With this edition of Project Discovery, we are adding a very interesting new aspect to this phenomenon: we show how gamers can act as an emergency response squad in analyzing scientific data when time is of the essence,” said MMOS CEO and co-founder Attila Szantner.

“Project Discovery has already transformed the field of online citizen science as we know it, and we are thrilled they decided to embark on this important and time-sensitive project,'' said Jérôme Waldispühl, Associate Professor, School of Computer Science, McGill University.

“This project will mine COVID-19 cytometry data in a truly unique way which we expect will facilitate new discoveries, and the data generated by participants will also enable the development of the next generation of algorithms,” said Dr. Ryan Brinkman, Professor in Medical Genetics, the University of British Columbia, Distinguished Scientist at BC Cancer.

Progress updates from the team of computer scientists and bioinformaticians based at the School of Computer Science at McGill University can be found via https://dnapuzzles.org/.

EVE Online can be downloaded for free by visiting www.eveonline.com. For all the latest information about the game, please visit EVE Updates.


About EVE Online®
EVE Online (PC/Mac) is a compelling, community-driven sci-fi MMO game where players can build and pilot a wide variety of spaceships, traversing vast solar systems for free and choosing their own path from countless options, experiencing space exploration, immense PvP and PvE battles, mining, industry and a sophisticated player economy in an ever-expanding sandbox. EVE is a captivating game in which hundreds of thousands of players compete for riches, power, glory and adventure, forging their own destinies in a single thriving universe. For more information, visit www.eveonline.com.

About CCP Games
CCP is a leading independent game developer that has been praised for its artistry, technology and game design that facilitates emergent behavior, empowering players with compelling means of self-expression. With the launch of EVE Online in May 2003, CCP established itself as a pioneer of cutting edge massively multiplayer games, winning numerous awards and receiving critical acclaim worldwide. Founded in 1997 on the principle of pushing the envelope and breaking new ground on all levels, CCP is on a mission to create virtual worlds more meaningful than real life. CCP is headquartered in Reykjavik, Iceland, and has additional studios in London and Shanghai. For more information, visit www.ccpgames.com.

About MMOS
Massively Multiplayer Online Science (MMOS) is a Swiss start-up bringing innovation to citizen science and gaming by introducing citizen science micro-tasks in major videogames. Past projects include the award-winning previous editions of Project Discovery in EVE Online and Borderlands Science in Borderlands 3. These science mini-games engaged over 1.5 million players and contributed with hundreds of millions of player submissions to advance science. For more information visit www.mmos.ch.

About McGill University
Founded in Montreal, Quebec, in 1821, McGill University is Canada’s top-ranked medical doctoral university. McGill is consistently ranked as one of the top universities, both nationally and internationally. It is a world-renowned institution of higher learning with research activities spanning two campuses, 11 faculties, 13 professional schools, 300 programs of study and over 40,000 students, including more than 10,200 graduate students. McGill attracts students from over 150 countries around the world, its 12,800 international students making up 31% of the student body. Over half of McGill students claim a first language other than English, including approximately 19% of our students who say French is their mother tongue.

The University of Modena and Reggio Emilia (UNIMORE)
UNIMORE has a longstanding tradition (it was founded in 1175) and is considered one of the best universities in Italy for teaching and research. UNIMORE offers a wide range of degree programmes at all levels in most disciplinary areas, from the humanities and social sciences to engineering and technology, and from physical and natural sciences to life science and medicine, and has over 300 international exchange agreements and cooperation programs. UNIMORE is located in important cities of art and culture, in the heart of one of Europe's wealthiest and most dynamic regions, which is world-renowned for its production of mechanical parts, engines, sports cars (e.g. Ferrari and Maserati) as well as for its agro-food sector (balsamic vinegar), ceramic tiles and manufacturing industries. The School of Medicine has several research and clinical centres of excellence and is considered one of the top in the country.
Posted by Qwill at 8:05 AM