Nearly 500 stories were submitted by writers in 33 countries, with each story presented as a memory retrieved from a robotic avatar unit 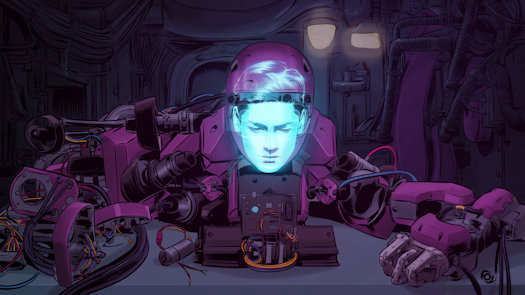 LOS ANGELES--(BUSINESS WIRE)--XPRIZE, the global leader in incentivized prize competitions, in partnership with All Nippon Airways (ANA), Japan’s largest 5-star airline, announce the winner of a global writing contest to imagine future use-cases of telepresence technology, as part of the Avatars Inc anthology.

The anthology is set in the year 2080, with the stories in the form of “memories” that were retrieved from the fleet of robotic avatar systems developed throughout the 21st century by Avatars Inc. The public was asked to locate the 25th and final missing memory in the form of a 2,500-3,500 word short story. Nearly 500 stories were submitted from writers in 33 countries.
The grand prize winner, Anya Ow from Australia, was selected for her story about a Peranakan ship captain who's been sailing the world looking for someone to inherit her recipes, who finds the partly-functional remains of an underwater exploration avatar.

All three finalists have been added to the “Memory Archives” on Avatars Inc and each is accompanied by an illustration inspired by the story.

The fictional Avatars Inc was inspired by the real-life $10 million ANA Avatar XPRIZE, a four-year global competition focused on the development of an avatar system that can transport a human’s senses, actions, and presence to a remote location in real time. The competition was launched in March 2018 at South by Southwest (SXSW) in Austin.

A total of 77 teams from 19 countries qualified to compete. In 2022, up to 20 teams will compete in the finals, which will include performance tests based on specific tasks that showcase the application of avatar technologies across several use-case scenarios. The first-place winner will receive $5 million.

To explore the world of Avatars Inc, and to read the winning story, visit http://www.avatars.inc.

About ANA
Following the “Inspiration of Japan” high quality of service, ANA has been awarded the respected 5-Star rating every year since 2013 from SKYTRAX. ANA is the only Japanese airline to win this prestigious designation eight years in a row. Additionally, ANA has been recognized by Air Transport World as “Airline of the Year” three times in the past 10 years - 2007, 2013 and 2018, becoming one of the few airlines winning this prestigious award multiple times.

ANA was founded in 1952 with two helicopters and has become the largest airline in Japan, as well as one of the most significant airlines in Asia, operating 58 international routes and 117 domestic routes. ANA offers a unique dual hub model which enables passengers to travel to Tokyo and connect through the two airports in the metropolitan Tokyo area, NARITA and HANEDA, to various destinations throughout Japan, and also offers same day connections between various North American, Asian and Chinese cities.

ANA has been a member of Star Alliance since 1999 and has joint venture partnerships with United Airlines, Lufthansa German Airlines, Swiss International Airlines and Austrian Airlines.
In addition to the full service and award-winning record of ANA, the ANA Group’s subsidiary Peach Aviation Limited is the leading LCC in Japan, and has expanded following the integration of Vanilla Air Inc. in late 2019. The ANA Group carried 54.4 million passengers in FY2018, has approximately 43,000 employees and a fleet of 260 aircraft. ANA is a proud launch customer and the biggest operator of the Boeing 787 Dreamliner.
Posted by Qwill at 1:18 PM