Please welcome Stephanie Burgis to The Qwillery as part of the Self-Published Fantasy Blog-Off 5 Interviews. 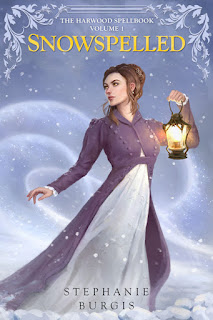 Stephanie:  When I was six years old, I wrote an epic story about a young dolphin and her family. You will be shocked to hear that - although my mom saved it! - it has STILL never been published. ;)

Stephanie:  Pantser all the way.

Stephanie:  First drafts are fun - editing is WORK. (Essential work! But it's definitely the harder and less enjoyable part.)

TQ:  What inspired you to write Snowspelled?

Stephanie:  I love Regency rom-coms and fantasy adventures, so Snowspelled - set in an alternate version of early 19th-century England in which a Boudiccate of powerful, hard-headed women governs the country while the "more emotional, irrational" gentlemen are expected to see to the magic - is a perfect mash-up of just about everything I find most fun.

TQ:  Please tell us about the cover for Snowspelled.

Stephanie:  I commissioned the cover art from Leesha Hannigan, a Scottish artist I love. The front cover represents a scene from early in the book, and I loved all the tiny details she inserted in service of the worldbuilding (as she'd read the book and really got it). Also, I would kill to wear that coat! :)

TQ:  In Snowspelled who was the easiest character to write and why? The hardest and why?

Stephanie:  The heroine herself, Cassandra Harwood, came very easily to me once I had her voice set in my head. She's brilliant and loyal and an absolute bulldozer of a person who always wants to do what's best for everyone she loves...but can have a very hard time understanding what those people actually want for themselves. Still, I couldn't get her personal/family dynamic just right until I figured out the character of her sister-in-law (and best friend), Amy Harwood, who is Cassandra's absolute opposite in personal presentation (a perfect, charming politician who reads people like books) but matches her 100% in loyalty to the family. Once I understood Amy's character, in fact, I fell so hard in love with her that I ended up writing a prequel story about Amy's own earlier romance with Cassandra's sweet, geeky brother, Jonathan.

TQ:  Does Snowspelled touch on any social issues?

TQ:  Give us one or two of your favorite non-spoilery quotes from Snowspelled.

To attend a week-long house party filled with bickering gentleman magicians, ruthlessly cutthroat lady politicians, and worst of all, my own infuriating ex-fiancé? Scarcely two months after I had scandalized all of our most intimate friends by jilting him?


Utter madness. And anyone would have seen that immediately…except for my incurably romantic sister-in-law.

Stephanie:  The direct sequel to Snowspelled, Thornbound, came out just a few months ago, and there's also a prequel novella (with a different heroine), Spellswept. The next book in the series is Moontangled out this February and starring an f/f couple (two women who've been side-characters in Snowspelled and Thornbound). And as I also publish MG fantasy adventures about dragons and fierce girls (this most recent series, which started with The Dragon with a Chocolate Heart, is being trad-published by Bloomsbury books), I have an MG book which came out in November 2019 called The Princess who Flew with Dragons. It's full of grumpy princesses, scholarly dragons, and radical goblin girls, and it was so much fun to write!

Stephanie:  Thank you so much for having me! 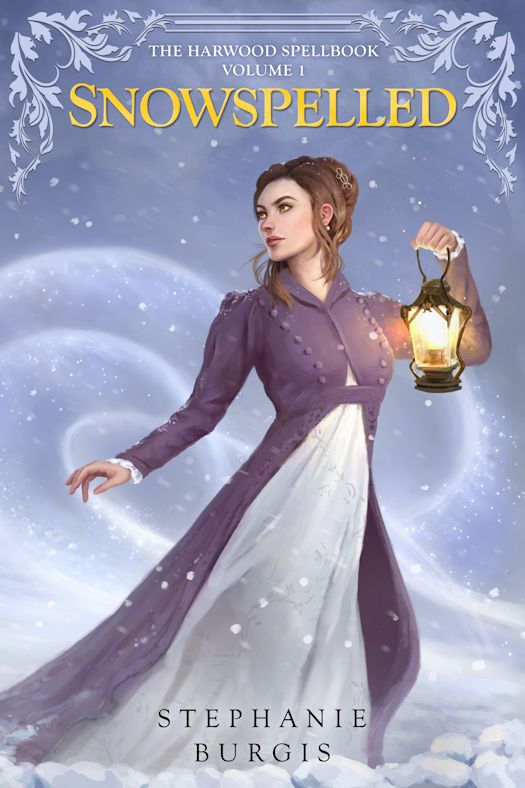 In nineteenth-century Angland, magic is reserved for gentlemen while ladies attend to the more practical business of politics. But Cassandra Harwood has never followed the rules...

Four months ago, Cassandra Harwood was the first woman magician in Angland, and she was betrothed to the brilliant, intense love of her life.

Now Cassandra is trapped in a snowbound house party deep in the elven dales, surrounded by bickering gentleman magicians, manipulative lady politicians, her own interfering family members, and, worst of all, her infuriatingly stubborn ex-fiancé, who refuses to understand that she’s given him up for his own good.

But the greatest danger of all lies outside the manor in the falling snow, where a powerful and malevolent elf-lord lurks...and Cassandra lost all of her own magic four months ago.

To save herself, Cassandra will have to discover exactly what inner powers she still possesses – and risk everything to win a new kind of happiness. 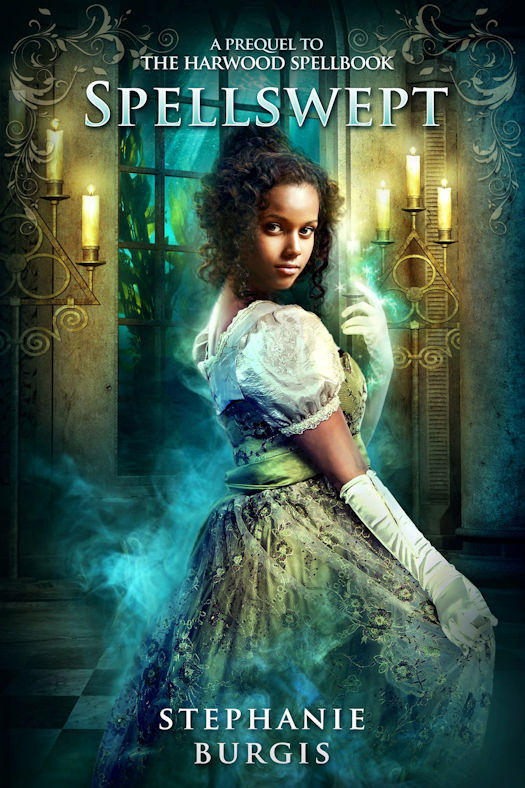 In the world of the Harwood Spellbook, 19th-century Angland is ruled by a powerful group of women known as the Boudiccate - but in order to become a member of that elite group, any ambitious young politician must satisfy tradition by taking a gentleman mage for her husband.

Amy Standish is a born politician...but Jonathan Harwood is her greatest temptation. On the night of the Harwoods' Spring Solstice Ball, in an underwater ballroom full of sparkling fey lights and danger, Amy will have to fight the greatest political battle of her life to win a family and a future that she could never have imagined.

It will take an entirely unexpected kind of magic to keep everything from crashing down around her.

Warning: this novella contains forbidden romance, dangerous magic, and political intrigue in an underwater ballroom. What could possibly go wrong?

Published first in the anthology The Underwater Ballroom Society on April 30th, 2018. 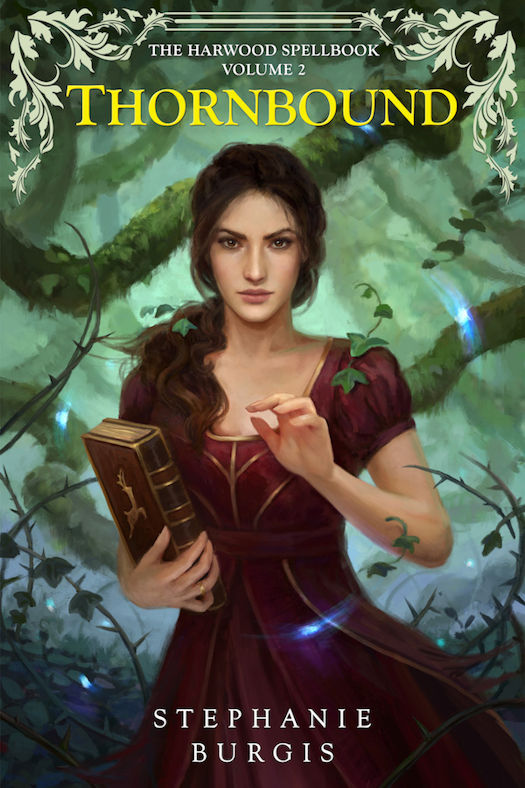 Cassandra Harwood scandalized her nation when she became the first woman magician in Angland. Now, she's ready to teach a whole new generation of bright young women at her radical new school, the Thornfell College of Magic…

Until a sinister fey altar is discovered in the school library, the ruling Boudiccate sends a delegation to shut down Thornfell, and Cassandra’s own husband is torn away from her.

As malevolent vines slither in from the forest and ruthless politicians scheme against her, Cassandra must fight the greatest battle of her life to save her love, her school, and the future of the young women of Angland. 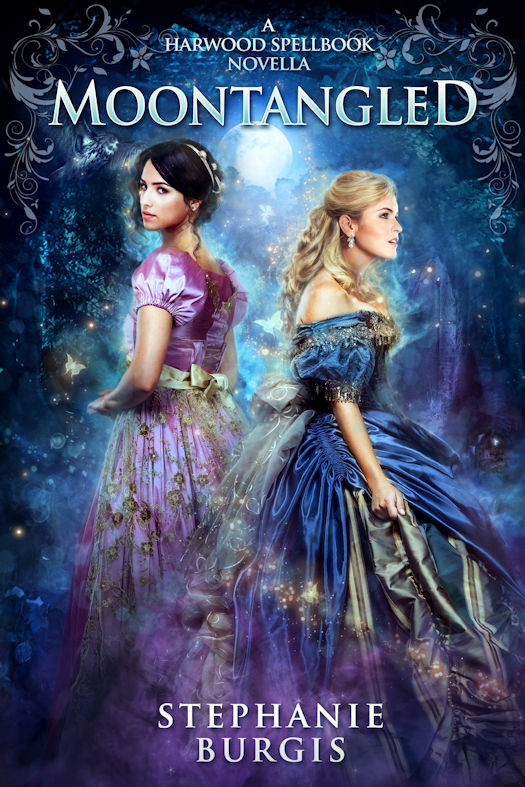 Take one ambitious politician and one determined magician with wildly different aims for their next meeting.

Add a secret betrothal, a family scandal, and a heaping of dangerous fey magic in an enchanted wood…and watch the sparks fly!

For just one moonlit, memorable night, Thornfell College of Magic has flung open its doors, inviting guests from around the nation to an outdoor ball intended to introduce the first-ever class of women magicians to society…but one magician and one invited guest have far more pressing goals of their own for the night.

Quietly brilliant Juliana Banks is determined to win back the affections of her secret fiancée, rising politician Caroline Fennell, who has become inexplicably distant. If Juliana needs to use magic to get her stubborn fiancée to pay her attention…well, then, as the top student in her class, she is more than ready to take on that challenge!

Unbeknownst to Juliana, though, Caroline plans to nobly sacrifice their betrothal for Juliana’s own sake – and no one has ever accused iron-willed Caroline Fennell of being easy to deter from any goal.

Their path to mutual happiness may seem tangled beyond repair…but when they enter the fey-ruled woods that border Thornfell College, these two determined women will find all of their plans upended in a night of unexpected and magical possibilities.

Stephanie Burgis grew up in East Lansing, Michigan, but now lives in Wales with her husband and two sons, surrounded by mountains, castles and coffee shops. She attended the Clarion West science fiction & fantasy writing workshop in 2001, just a year after completing her time as a Fulbright scholar at the University of Vienna, studying music history, in 1999-2000. After spending three more years as a PhD student studying opera history at the University of Leeds in the U.K. (focusing on opera and politics in 18th-century Vienna and Eszterháza, and doing the research that would later result in her first novel for adults, Masks and Shadows), she went to work for a British opera company and stayed there until the onset of a serious chronic illness, M.E./CFS, forced her to give up work outside the home and focus purely on her writing (and, later, on her parenting, too).

Since then, she has published nearly forty short stories for adults and teens in various magazines and anthologies. Her most recent MG fantasy novel is The Girl with the Dragon Heart (Bloomsbury 2018); the first book in that series, The Dragon with a Chocolate Heart, won the Cybils Award for Elementary/Middle Grade Speculative Fiction 2017. Her most recent publication for adults is the romantic fantasy novella Thornbound: Volume II of The Harwood Spellbook. The f/sf anthology that Stephanie co-edited with Tiffany Trent, The Underwater Ballroom Society, has been longlisted for the 2019 Locus Award for Best Original Anthology.

Her trilogy of MG Regency fantasy novels was published in the US as the Kat, Incorrigible trilogy and in the UK as The Unladylike Adventures of Kat Stephenson. The first book in the trilogy won the Waverton Good Read Award for Best Début Children’s Novel by a British writer, and the full trilogy was re-released in the US as A Most Improper Boxed Set. Her first two historical fantasy novels for adults, Masks and Shadows and Congress of Secrets, were both published by Pyr Books in 2016, and Masks and Shadows was included on Locus Magazine’s Recommended Reading List for 2016.