Happy 2020! I am hoping its not too late to say that. I can't believe it is already February. Christmas, NYE, my and the Hubinator's birthdays just whizzed by. The festive season isn't a big reading season for me and it can take me to get back into the reading groove in January. So in this post I am including a few of the books I enjoyed in December AND in January. Lucky you! Let me get to it.

The Hubinator is a big fan of the TV adaptations of Miss Marple and Poirot written by the author Anthony Horowitz. Horowitz is quite a prolific writer and the author of the YA, Alex Rider series. The 'Hubbs' loves listening to audio books and as a Horowitz fan he has many of Horowitz's novels. He convinced me to listen to the first two instalments of the Hawthorne series - The Word is Murder and The Sentence is Death. 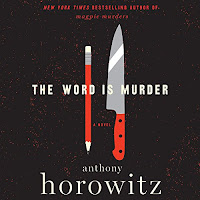 Both of these novels are unique in that the main character is Horowitz himself....or I suppose a slightly fictional version of the himself. The story centers on the murder of the wealthy mother of a famous actor, Diana Cowper. She is murdered just hours after planning her own funeral. Reading it in the papers was the closest that Horowitz thought he would come to victim. He would never have guessed that he would be brought on board to help investigate the crime. Horowitz is in between novels when he is asked to write a series based on the ex-police detective, Hawthorne. Now a consultant to the Metropolitan Police Hawthorne has been brought in to find out who murdered the widow Cowper. To chronicle Hawthorne's methods and to document the man in action Horowitz joins Hawthorne on the case. They become a modern day Holmes and Watson as they try to solve the murder of Diana Cowper. Soo many suspects and so little time to discover 'who dunnit'. Both Horowitz and the reader are never too sure if the real mystery is the murder of Diana Cowper or the enigmatic Hawthorne.

The charm in this story (if a murder mystery can have charm) is the relationship between Horowitz and Hawthorne. Horowitz finds the secretive Hawthorne extremely frustrating and is determined to prove he is the better investigator. Instead Horowitz finds himself 2 steps and several clues behind the talented Hawthorne. The scenes between the two lead characters steal the 'show' and for me figuring out who did it was secondary to their relationship. 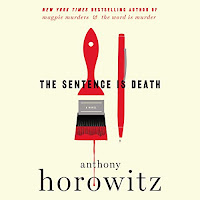 In book 2 - The Sentence is Death - the mystery loving duo are back to figure out who murdered the highly successful divorce lawyer of the rich and famous Richard Pryce. The tee-total was bludgeoned to death by a £3000 bottle of wine and the more Horowitz and Hawthorne look into his life the more suspects they uncover. More secrets to uncover, more clues to solve and not just about the murder scene as Horowitz continues his quest to uncover the 'real' Daniel Hawthorne.

This is the start of a great series. The murder mysteries are complex and while I usually guess who the culprit is I didn't for either book. You would think it would be really easy to write about yourself but Horowitz wasn't kind to himself. There is a hilarious scene where he attempts to chase down a 'would be' criminal and it's not as easy as in the movies. Again, it's the relationship between these two characters that really shine for me. I listened to the audio version of both books which are narrated by Rory Kinnear. What a coup! He is a fantastic narrator and if I ever have the chance to meet Anthony Horowitz I am going to be really disappointed if he doesn't sound like Kinnear!

I also read the first instalment of Kate Kane Paranormal Investigator by Alexis Hall (notice the murder mystery theme?). The story is set in a paranormal London with the brash and brazen investigator Kate Kane on the case to solve who brutally murdered a werewolf on the steps of a nightclub owned by a powerful 800 year old vampire. All the paranormal factions are suspects and Kane has to find out who is responsible and try not to get killed in the process.

Not much to say about this book as I didn't really like it. If Kane spent half as much time trying to figure out who the killer was as she did lusting over the vampire prince then the book would have been over after the first chapter. For me it felt like Kane was based a bit too heavily on Jessica Jones and I didn't find anything too original about the plot.

Ilona Andrews was back with another instalment of the Innkeeper Chronicles. This time a holiday novella - Sweep with Me. I didn't even know there was such a thing as a holiday novella but what a treat...and released on my birthday to boot! Two gifts in 1. The story starts not long after the events of the last book. Dina and Sean are together, just shared a belated Christmas celebration and are trying to recover from siege that almost destroyed them all. Dina is very nervous about her future as she and Sean have been summoned by the Council to present themselves as worthy of having the Gertrude Hunt. Before that can happen Dina is asked to host guests that could mean the end of everything she holds dear....but she can't refuse as it's the Treaty Stay - a sacred holiday Innkeeper holiday when they celebrate the signing of the treaty that brought all the inns together. No Innkeeper can refuse to offer lodging to a guest during Treaty Stay regardless how dangerous they are. It's up to Dina, and now Sean to make sure that the comfort and security of their guests are there number 1 priority. Good luck! They will need it.

This was a great novella and definitely more lighthearted than previous instalments. I enjoyed the overall plotline and there was development of each of the main characters despite this not being a full length novel. A perfect holiday treat. Yes again, the illustrations - especially the cover are gorgeous and I have spent a lot of time gazing at the cover and wondering how the illustrator managed to make Dina and Sean look exactly how I thought they would. The story was released on Andrew's blog twice a week, right when they said it would which meant that there was no need to constantly press 'refresh' on the blog checking for new chapters. There is even a teaser chapter for Sapphire Flames. A hidden present from the authors.


Well folks, that is my holiday reading for you. A little later than I had hoped but hopefully I have given you some options on what should be on your TBR. Until next time Happy Reading!
Posted by Melanie at 2:03 PM