Interview with Andrew Hunter Murray, author of The Last Day


Please welcome Andrew Hunter Murray to The Qwillery as part of the 2020 Debut Author Challenge Interviews. The Last Day was published on February 4, 2020 by Dutton. 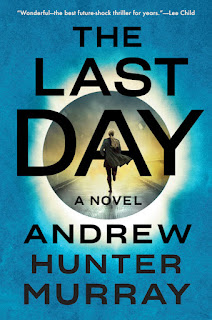 Andrew:  It was a rather uninspired bit we were asked to write for an exam at school at the age of about seven, about losing my parents in a supermarket. Clearly, themes of familial segregation and trauma resulting from it stayed with me, as there’s a fair bit of that in The Last Day. Although I hadn’t yet thought of ending the world first…

Andrew:  Enormous plotter. The only time I’ve tried pantsing (can this really be a verb?), I got disastrously stuck and then had to go back and unpick everything and start again. I’m now very wary of starting to write a big work without knowing what’s going to happen – although I might still do that for a short story.

Andrew:  The starting. Pure agony. The sooner you can get the Band-Aid ripped off, the better, and after an hour or two I have to be pried from the desk.

Andrew:  Better writers. Fortunately, there are thousands of them, all coming up with the most remarkable plotlines and brilliantly striking characters and themes. Every day of writing is a thrilling attempt to try and keep up with them, and as a lot of my favorite authors are dead, I can only gain on them.

TQ:  Tell us something about The Last Day that is not found in the book description.

Andrew:  I gave up twice, lost faith plenty more times, and threw away 30,000 words at one point because the plot had gone in a different direction. All of that is meant to emphasize not that it was terribly brave of me to start again, just that all creative projects seem a certainty once they’re done, when in fact they may seem a much less sure thing from a position in the thick of it. In short: if you’re writing something yourself, keep going!

TQ:  What inspired you to write The Last Day?

Andrew:  The state of the world today, and a vision of how it might be fifty years from now – if we don’t start to change direction now.

TQ:  What sort of research did you do for The Last Day?

Andrew:  Quite a bit! Because it’s about the planet’s rotation slowing to a stop, I contacted astrophysicists and oceanographers, and in between times I read as much science as I could about satellites and servers and the effects of sunshine. I also read a brilliant book called ‘The New Odyssey’, all about the people who are making their way from Africa and the Middle East to Europe in search of a better life. That all fed into the book at various points.

TQ:  Please tell us about the cover for The Last Day.

Andrew:  The British and American covers are very different. But in the USA, we see the following: a brown-haired woman in a long coat running along a gangway, surrounded by the corona of an eclipse. So we know it’s going to be a) a little planetary and science-fictionish, and b) a rip-roaring read. And the *final* element of the cover is some nice words from Lee Child saying how much he enjoyed it, which is possibly my favorite bit.

TQ:  In The Last Day who was the easiest character to write and why? The hardest and why?

Andrew:  Ellen Hopper, my main character, was the easiest. She practically grabbed me by the lapels (although really she’s a polite person and wouldn’t do that in real life). I don’t recall finding any characters particularly difficult to caption; the stuff I find really hard is the overarching structure and individual bits of plot.

TQ:  Does The Last Day touch on any social issues?

Andrew:  Yes, I think so. It has a big sci-fi idea at the core, but like all sci-fi it’s an attempt to analyze the world as it is today. So the book looks at climate migration, and about whether it’s right to bring a child into a world being slowly cooked by global warming, and about countries which have started trying to keep foreigners out in the attempt to preserve what they have, and totalitarianism. So I don’t think I could have avoided social issues really.

TQ:  Which question about The Last Day do you wish someone would ask? Ask it and answer it!

Andrew:  “Would you prefer the first series of the TV adaptation to be eight or ten parts long?” And: eight, please.

TQ:  Give us one or two of your favorite non-spoilery quotes from The Last Day.

“The ship of the dead, that was how it had begun. Hopper remembered that later.” This is the first line of my first ever novel, so I think it will always have a pretty special place in my heart. I remember reading a wise author – possibly Neil Gaiman? – saying that first line of your first book will the most important thing you’ll ever write. So I went back and forth on the phrasing quite a lot.

Andrew:  All sorts. I’m currently polishing a set of short stories beyond the point of all practicability and winding up my arm for the second novel. It will be in similar territory, but I think different enough to present something new to any readers who stick with me… 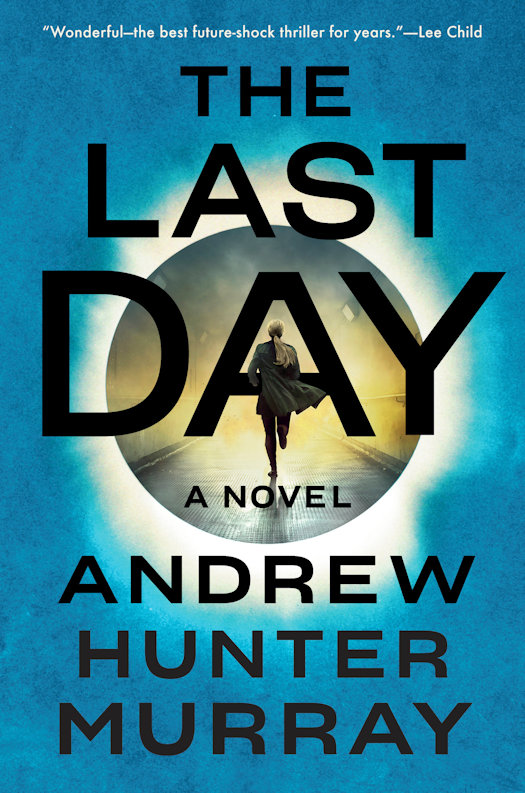 A visionary and powerful debut thriller set in a terrifyingly plausible dystopian near-future—with clear parallels to today’s headlines—in which the future of humanity lies in the hands of one woman, a scientist who has stumbled upon a secret that the government will go to any lengths to keep hidden.

A world half in darkness. A secret she must bring to light.

It is 2059, and the world has crashed. Forty years ago, a solar catastrophe began to slow the planet’s rotation to a stop. Now, one half of the globe is permanently sunlit, the other half trapped in an endless night. The United States has colonized the southern half of Great Britain—lucky enough to find itself in the narrow habitable region left between frozen darkness and scorching sunlight—where both nations have managed to survive the ensuing chaos by isolating themselves from the rest of the world.

Ellen Hopper is a scientist living on a frostbitten rig in the cold Atlantic. She wants nothing more to do with her country after its slide into casual violence and brutal authoritarianism. Yet when two government officials arrive, demanding she return to London to see her dying college mentor, she accepts—and begins to unravel a secret that threatens not only the nation’s fragile balance, but the future of the whole human race.

Andrew Hunter Murray is a writer and comedian. He is one of the writers and researchers behind the BBC show QI and also cohosts the spinoff podcast, No Such Thing as a Fish, which, since 2014, has released 250 episodes, been downloaded 200 million times, and toured the world. It has also spawned two bestselling books, The Book of the Year and The Book of the Year 2018, as well as a BBC Two series No Such Thing as the News. Andrew also writes for Private Eye magazine and hosts the Eye‘s in-house podcast, Page 94, interviewing the country’s best investigative journalists about their work. In his spare time he performs in the Jane Austen–themed improv comedy group Austentatious, which plays in London’s West End and around the UK. The Last Day is his debut novel.