The Qwillery is thrilled to host the cover reveal for the 3rd novel in Amber Royer's Chocoverse  - FAKE CHOCOLATE! 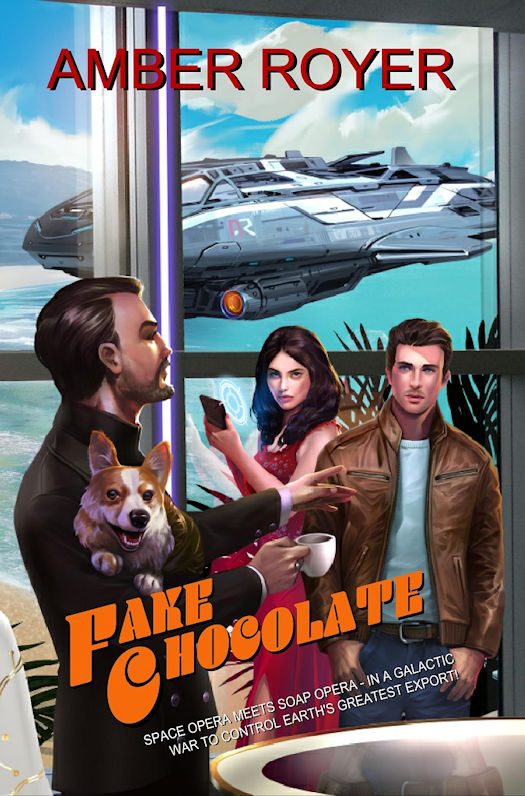 When disease ravages Earth’s cacao plantations, Bo Benitez returns home to help with the media spin to hide that chocolate is in danger of being lost forever. HGB has come up with a new product – one which doesn’t appease the cocoa-addicted murderous, shark-toothed aliens threatening to invade the planet. Someone has to smooth things out. Just when Bo starts to make headway, someone tries to kidnap her. While trying to avoid more would-be-kidnappers, Bo finds out that HGB is developing a cure for withdrawal from the Invincible Heart. Will she let her need to be physically whole again tie her to HGB and its enigmatic CEO? When she gets a key piece of evidence that would unravel secrets from three different planets, she has tough choices to make about the future of her world and its place in the galaxy.

Fake Chocolate will be available in paperback and Kindle eBook on April 14, 2020!


Pre-order Fake Chocolate at Amazon and Barnes and Noble!

As a writer, influences come from a ton of different places and can pop up in your work years, even decades later. And when one idea sparks off another, those influences can be changed in ways you couldn’t have imagined before you started writing. With the Chocoverse, where there’s about to be a galactic war over controlling the source of chocolate, one big plot thread centers around space pirates who are known to grapple onto chocolate transport vessels, space the crew and take the cargo. Brill, the romantic lead in the series, is constantly reminding people he’s not a pirate – he’s a gray trader. Which goes a long way in defining his moral code. Even though he does questionable things over the course of the trilogy, there are some big lines he won’t cross.

People keep asking how I thought up the Chocoverse, and why I wrote it. There are a number of aspects and reasons. But for the inclusion of the space pirates, it is simple.

When I was a kid, we lived close enough to Galveston, Texas, to daytrip across to the island. After my husband and I first got married, we were even known to take the occasional ferry ride over just for dinner. We were spoiled to fresh Gulf Coast seafood, and after-dinner walks along the moonlit beach. As long as it wasn’t jellyfish season. And there wasn’t a high concentration of washed-up seaweed or tar balls. (If you’re not from Texas, here’s an explanation of what a tar ball is: http://www.texasmonthly.com/the-culture/texas-primer-the-tar-ball/).

Galveston doesn’t rate tops as a beach destination. But one thing it does have is history. And I’ve always been fascinated with it. Not one, but two, of my early (eck, unpublishable) novels were set in the midst of the events leading up to the 1900 hurricane that devastated the island. (https://www.1900storm.com/). I took a run at it as historical fiction, then again as time travel. When I was doing the research, I spent a lot of time upstairs in the Special Collections section of the Rosenberg Library, handling with gloved hands original letters survivors wrote in the aftermath of the devastation, learning about the way they piped sand in from underwater in order to raise the island farther up out of the ocean by fifteen feet (watch this video detailing it: https://www.youtube.com/watch?v=beGT8OkWwBE) and then topping it with a sea wall to brace against another storm. (2008’s Hurricane Ike took a similar path across the island, and while the damage was still devastating, it was mitigated by the sea wall).

But there was something else that happened as a result of raising the island. Jean Lafitte’s pirate treasure – if it every really existed – was lost forever under fifteen feet worth of new soil, and the already vague ideas about the potential location were made worthless when the landmarks all changed. (http://therecordlive.com/2009/04/29/jean-lafitte-legendary-gulf-pirate-is-some-of-his-gold-still-buried-here/) People today are still looking for the treasure up Texas rivers, and in Lafitte’s other favorite town, New Orleans.

There’s so much mystery surrounding Lafitte – nobody even knows for sure when he was born or when he died (either in exile or in battle, depending in which sources you believe). And how history views him as a person – well, that varies. After all, one historian’s pirate is another historian’s privateer.

A privateer is a pirate who is backed by a specific government, who is legally allowed to commit acts of piracy against ships from countries with which that country is at odds. Even then, it wasn’t always clear cut. As part of his brother Pierre’s operation, Lafitte likely got his first Letter of Marque (privateer sponsorship) from the French, in Saint-Domingue (now Haiti). (This of course cannot be verified – the sources keep hedging with statements like, “Ramsay speculates that Lafitte was born in the French colony of Saint-Domingue. . .” https://en.wikipedia.org/wiki/Jean_Lafitte ). That early privateering would have started around 1805. But by the time war broke out in 1812, a number of the Lafitte Brothers’ boats had Letters of Marque from the United States – and the British. And other governments, too. According to GoNOLA.com, “Goods captured from British ships were supposed to be turned over to the US, but it was hard to tell what was what, so the Americans quickly felt double-crossed by Lafitte and his men. On November 13, 1812, the Americans raided Barataria, arrested the Lafittes and 25 of their men and confiscated all of their goods. The borthers Lafitte made bail but then skipped, not returning for trial. Pierre was re-arrested in 1813 and jailed. Jean continued the smuggling and piracy . . .” http://gonola.com/2011/10/26/nola-history-jean-lafitte-the-pirate.html

Even after that, when the British offered Lafitte a pardon for his crimes in exchange for information that could turn the tide of the war, Lafitte refused, honoring his previous loyalties. (His brother was “allowed to escape” from prison, as a sort of a thank-you for this.) Yet later, we see Lafitte in the role of spy, assisting the Spanish in their attempts to stop Mexico from gaining independence. So it is really hard to see what his motives were in all of this, and where his values lay. Many of his decisions can be explained best in terms of self-interest and profit. And yet, he was a folk hero, even during his own lifetime.

It was this complexity and moral ambiguity about pirates that fascinated me (and reading Treasure Island as a kid didn’t hurt.) There is such of a sense of romance surrounding pirates – and yet, if you look at accounts of actual modern-day piracy, you can see how coldly horrific their actions must have been. That’s something I wanted to explore a bit with the galactic-level pirates in Free Chocolate.

On some geeky level, space pirates are just cool. Look at the joy protagonist Mark Watney feels in The Martian, when he’s able – through some quirks of real-world international law – to say, "After I board Ares 4, before talking to NASA, I will take control of a craft in international waters without permission. That makes me a pirate! A space pirate!"

But I didn’t want to just slap the word “space” in front of everything and consider it a magnification of the earth equivalent. (The silliness of that is explored in this TvTropes article over here: http://tvtropes.org/pmwiki/pmwiki.php/Main/SpacePirates -- but don’t blame me if you get sucked in clicking links to other terms on their site.)

And on a practical level, look at Treasure Planet, which completely bombed at the box office (though it’s my second favorite Treasure island film adaptation – right after Muppet Treasure Island.) It probably did so poorly in part because “Space pirates,” as a term is almost a joke (which makes it a good thing I’m writing a comedy). There are other universes where characters are committing piracy (erherm, I’m looking at you Firefly), but they just don’t call it that. Which makes it more palatable. But Free Chocolate’s supposed to be funny, so I let the characters use the term. At one point in Book 3 Bo is exasperated about being kidnapped by space pirates. Again. 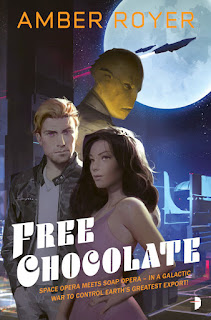 Latina culinary arts student, Bo Benitez, becomes a fugitive when she’s caught stealing a cacao pod from the heavily-defended plantations that keep chocolate, Earth’s sole valuable export, safe from a hungry galaxy. Forces arraying against her including her alien boyfriend and a reptilian cop. But when she escapes onto an unmarked starship things go from bad to worse: it belongs to the race famed throughout the galaxy for eating stowaways. Surrounded by dangerous yet hunky aliens, Bo starts to uncover clues that the threat to Earth may be bigger than she first thought. 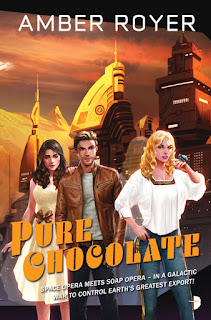 To save everyone she loves, Bo Benitez is touring Zant, home of the murderous, shark-toothed aliens who so recently tried to eat her. In the midst of her stint as Galactic paparazzi princess, she discovers that Earth has been exporting tainted chocolate to the galaxy, and getting aliens hooked on cocoa. Bo must choose whether to go public, or just smile for the cameras and make it home alive. She’s already struggling with her withdrawal from the Invincible Heart, and her love life has a life of its own, but when insidious mind worms intervene, things start to get complicated!

There is a Chocoverse short story in Amazing Stories, Issue 5: "When Kromish Eyes are Smiling" - Bo winds up having to cooperate with one of Brill’s friends after the two of them are kidnapped by a bounty hunter with a penchant for strategy games. Get the issue at Amazon. 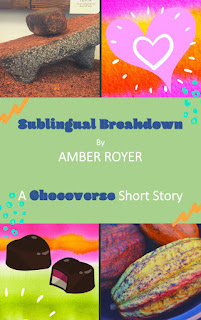 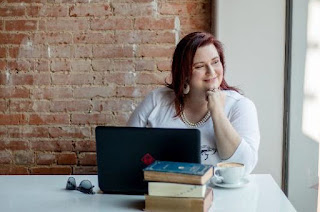 Amber Royer is the author of the high-energy comedic space opera Chocoverse series (Free Chocolate, Pure Chocolate available now. Fake Chocolate coming April 2020). She teaches creative writing classes for teens and adults through both the University of Texas at Arlington Continuing Education Department and Writing Workshops Dallas. She is the discussion leader for the Saturday Night Write writing craft group. She spent five years as a youth librarian, where she organized teen writers’ groups and teen writing contests. In addition to two cookbooks co-authored with her husband, Amber has published a number of articles on gardening, crafting and cooking for print and on-line publications.They are currently documenting a project growing Cacao trees indoors. 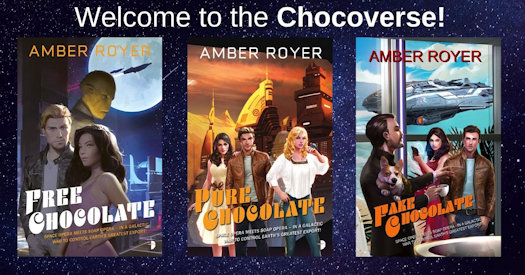