Happy belated Thanksgiving to any and all American readers who celebrate. I hope you had a great time and there was lots of pumpkin pie on hand. I miss pumpkin pie. The Brits don't really eat it and so hard to get good pumpkin. Ho hum....although there are lots of British desserts that I can scoff instead 😋


November was a busy reading month for me as I am one of the Qwillery's agents for SPFBO5. It was the month where we read each other's choice for semi-finalist. Despite thinking I had loads of time to get them all read at a leisurely pace I ended up struggling with one of them and that seemed to eat my reading time. However, despite that the Qwillery's reviewing team made its selection to go forward to the finals. Check out the blog to find out which book we picked.  But the big question I am sure you are asking ....is what else did I read? 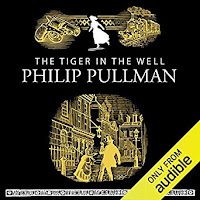 For those of you who follow this series you will remember that in October I was listening to the audio version of the Sally Lockhart series by Philip Pullman. I have the two final books to tell you about starting with The Tiger in the Well. This instalment is set 3-4 years after The Tin Princess and Sally is now a mother, successful business woman and enjoying life surrounded by her friends. When she receives a summons to appear in court charged with abandoning the husband she knows she never married and to hand over custody of her most beloved daughter Harriett, Sally couldn't possibly imagine the chaos that her life would become. Someone was working behind the scenes to dismantle the life that Sally has so carefully made for herself. On the run with her daughter Sally has to figure out who is pulling the strings and why they want to take everything and everyone she loves away from her.

I listened to these books back to back and I rather spoiled it for myself.  I had to take a bit of a break after the first few chapters as I felt a bit like too much of a Sally at once wasn't a good thing. I needed to savour the plotline so gave it a rest of a week or so and then tucked back in. This story is very suspenseful as Sally is nearly thwarted every other page.  I did think she was a bit dim in not guessing who was behind her downfall and I found myself wanting to give Sally a bit of a shake. It's a great end to Sally's story though and Anton Lesser does another stellar job bring her and all the east end characters to life. 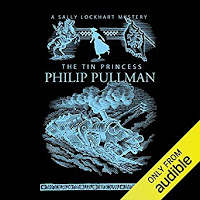 The Tin Princess is not about Sally. This story is about Sally's best friend Jim and his adventure with with Adelaide, the little girl he helped rescue in book 1. Adelaide has been missing for many years but she is back and out to become a princess of the made up country of Razkavia. Jim is hired as Adelaide's bodyguard and he will need every trick up his cockney sleeve to protect the princess.

The big mystery in The Tin Princess is not who is trying to harm the Princess or how Jim is going to save the day. The mystery is why Pullman chose to write this story in the first place. Other than Sally having a very minor part at the both ends of the book it isn't a book about her despite it being the 4th instalment in the Sally Lockhart series. The story is OK but definitely the weakest of the four. The aspect that I have liked about the other books is that there was a historical element to the story which gave it a hint of realism. Much of the The Tin Princess was set in a fictional country and Adelaide with her strong east end London accent and lack of education would not have been a top pick to marry into the royal family. I found this aspect of the plot to be a combo of Pretty Woman and The Princess Diaries. Another minor downside in the audio version is the change in narrator. This time the story is told by Nigel Anthony and the change in 'voice' was a bit jarring after spending 3 books with Anton Lesser's version of Jim. 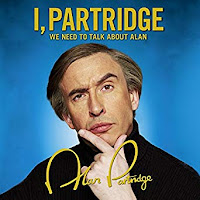 Check out the review of the other book I read in November - Kitty Peck and the Parliament of Shadows.


Well that's it for me and November. I hope you have found some great books to tuck into along with some pumpkin pie! Until next time Happy Reading!
Posted by Melanie at 9:13 AM