Review: Kitty Peck and the Parliament of Shadows by Kate Griffin 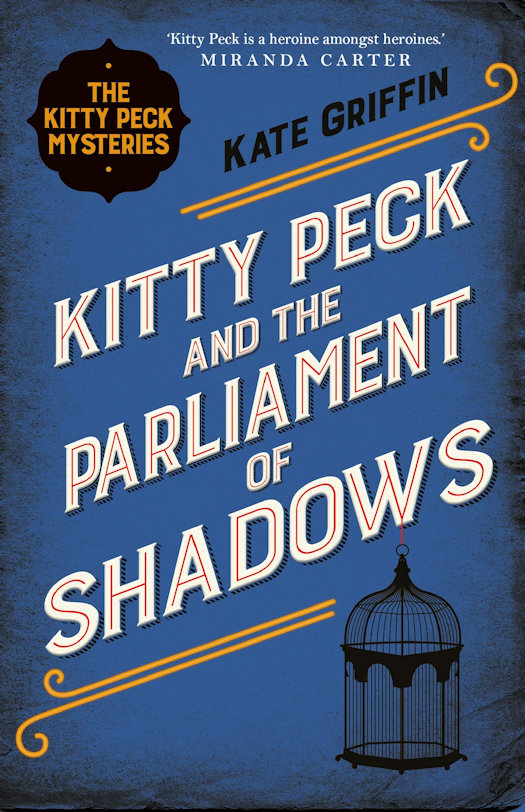 Even though Paradise was riddled with rot, I reckoned I could make it a cleaner place for the poor types who came with the dirty trades. I could make them all love me, I thought.

When Kitty Peck took over Paradise – her grandmother’s East End criminal empire – she thought she would be able to run it her own way. What Kitty didn’t know was that her grandmother had also left her violently entwined with the Barons of London. This coterie of fiends will stop at nothing to gain power, and they’ve already robbed Kitty of so much that she held dear.

Kitty is determined to do away with the dark underbelly of Paradise and to transform her music halls into the jewels of Limehouse. But as she begins her final assault on the Barons, a new threat appears in the form of an eerily charismatic preacher on a crusade against ‘wickedness and vice’. Can Kitty save Paradise from destruction, without losing any more of the people she loves?

Kitty Peck and the Parliament of Shadows is the final instalment of Kate Griffin's Kitty Peck series. Poor Kitty has risen to great heights - both literally and metaphorically. She has flown high above the dance halls in a golden cage as a performer and now that she has inherited her grandmother's east end empire she wants to make changes. It's not as easy as she hoped especially when the Barons still have control of her fate. However, its not just the Barons that are causing a problem for Kitty's plans to clean up the rot in her new empire. An extremely charismatic preacher has come to town preaching against the sinful ways of the residents of the east end. He is whipping up the locals against the dance halls and everyone who earns a living from them...Kitty included. If the Barons and the preacher weren't enough certain members of Kitty's theatre family have ended up dead, in the most gruesome ways possible. Now she has a serial killer to contend with. Things are not looking up for the Limehouse Linnet.

This final instalment is action packed with a capital 'A' from the first chapter to the very last. I quite enjoyed it (not the gruesome parts, of course) as there was a real sense throughout that life was going to get better for Kitty. The previous books were quite harrowing and while the murders on her doorstep, the omnipresent guilt she feels for Dan's death and the fact she was the reason her love interest loses an eye it doesn't stop her striving to be someone better. I thought it was quite interesting how Griffin uses the preacher as the tool to resolve one of the story's main plot points. Without revealing too much it was quite clever how she wound a number of plot threads and characters around one another to resolve not just the preacher plotline but the mystery of Kitty's parentage as well.  Usually, I can guess what will happen but I was on the edge of my seat throughout the final chapters of the book as I had no clue what Giffin had in store for Kitty and friends.

I did enjoy this series as a whole and Griffin clearly had done a lot of research into the period so that Kitty's life was true to the period. The book is very visceral and you can really picture Kitty, her clothes, and her home. I felt very sorry for Kitty in previous books but she was like a phoenix who has risen from the ashes...or in her case from the opium smoke to take control and create her own future. If you want to find out for yourself then you need to start at book 1 - Kitty Peck and the Music Hall Murders.
Posted by Melanie at 7:06 AM