Interview with Kassandra Montag, author of After the Flood


Please welcome Kassandra Montag to The Qwillery as part of the 2019 Debut Author Challenge Interviews. After the Flood was published on September 3, 2019 by William Morrow. 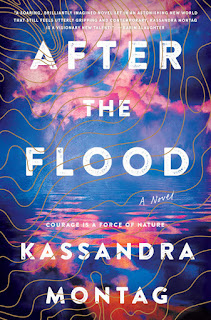 Kassandra:  I’m a hybrid. I start as a pantser—I write snippets of scene and dialogue and take notes until I have enough rough material to start evaluating everything. I need to have a strong narrator’s voice, main characters, a solid premise, and a rough idea of the various plot points. Then I look at what I have and outline. Afterwards, I write a full draft, often deviating from the outline and making substantial changes as I go.

Kassandra:  Trusting the process can be difficult if it’s been a long, hard writing day. But really, translating what is in my imagination and making it real for the reader remains the most challenging—and most rewarding part about writing.

Kassandra:  A variety of influences all came to bear on this novel: Viking sagas, early American Western adventure tales, environmental documentaries, contemporary post-apocalyptic storytelling, and my personal experience of motherhood. Other influences include the post-apocalyptic/dystopian novels The Road and The Handmaid’s Tale. A nature/animal documentary called The Last Lions also shaped my desire to write a tale that felt both epic and personal at the same time.

TQ:  Describe After the Flood using only 5 words.

TQ:  Tell us something about After the Flood that is not found in the book description.

Kassandra:  I’ll go a step further and share something that was in my notes for After the Flood, but I didn’t have room to include in detail in the novel. In the beginning the book briefly summarizes how countries and governments collapsed during the flood. The thing I didn’t have room for was describing my vision of a Second Civil War in the U.S.—this time a war of the coasts at war with the middle of the country. I imagined that as the coasts lost all their major cities, they depended more and more on resources in the middle of the country. Immigration and resource scarcity placed pressure on regions that already harbored resentment and a urban/rural divide, resulting in a brief Second Civil War.

TQ:  What inspired you to write After the Flood?

Kassandra:  It came from the confluence of a dream, an image, and a line in my journal. The dream was of a wave of water coming across the prairie, all the way from the oceans, a flood that spanned the whole continent. After having this dream, I saw the image of a mother on a boat in a future flooded world, sailing with one daughter, but separated from her other daughter. Years before I had the flood dream, I had another image that kept recurring in my mind’s eye and that I detailed in my journal: “A group of people huddle around a campfire, struggling to survive and looking for a safe haven.” These two storylines, of a mother separated from her daughter in a flood, and a group of people trying to survive, began to brush up against each other, suggesting possibilities.

TQ:  What sort of research did you do for After the Flood?

Kassandra:  My research included: accounts of the Bajau people who partially live on the water in Southeast Asia, stories from ancient seafaring tribes such as the Vikings, and contemporary guide books on survival techniques such as building fires, fishing, etc.
In imagining the flood itself I was inspired by scientific research, namely an article in the New Scientist about how three times the Earth’s water was stored under the Earth’s crust in hydrate form. So I imagined what it would be like if that trapped water could somehow be released to the Earth’s surface in liquid form, exploding up from the depths.

TQ:  Please tell us about the cover for After the Flood.

Kassandra:  The cover for After the Flood is an abstracted picture of the sky and sea. It has glorious colors and in the image you cannot see the horizon—the sea and sky blend together. The novel depicts a world in which the horizon has moved dramatically and I loved how the designer captured this sense of sky and sea merging in a way that is both beautiful and dramatic.

TQ:  In After the Flood who was the easiest character to write and why? The hardest and why?

Kassandra:  Pearl was the easiest character to write, perhaps because she is a child and does not have ulterior motives the way other characters do. She is more purely herself, less torn by the demands of survival. Also, because she was born in this flooded environment, she seems to deal with it in a more natural way than some of the other characters. The hardest character to write was Jacob because I had trouble getting into his head and understanding his motivations for abandoning part of his family.

TQ:  Does After the Flood touch on any social issues?

TQ:  Which question about After the Flood do you wish someone would ask? Ask it and answer it!

Kassandra:  What is a central theme of After the Flood?

After the Flood is partly about the role selfishness and selflessness play in the fight for survival. I was interested in how the survival instinct can be inherently selfish in a dangerous world without enough resources and if there are ways to transcend that. I was also curious about the way that survival can be seen as selfless—an act of love through carrying on.

TQ:  Give us one or two of your favorite non-spoilery quotes from After the Flood.

“Children think we make them, but we don’t. They exist somewhere else, before us, before time. They come into the world and make us. They make us by breaking us first.”

“But other times, when everything was so dark out on the sea that I felt already erased, it seemed like a kindness that life before the floods had gone on for as long as it did. Like a miracle without a name.”

“I don’t know how to talk to Pearl about what lay beneath us. Farms that fed the nation. Small houses built on quiet residential streets for the post-World War II baby boom. Moments of history between walls. The whole story of how we moved through time, marking the earth with our needs.”

Kassandra:  I’m currently working on my next novel, a gothic murder mystery.


After the Flood
William Morrow, September 3, 2019
Hardcover and eBook, 432 pages 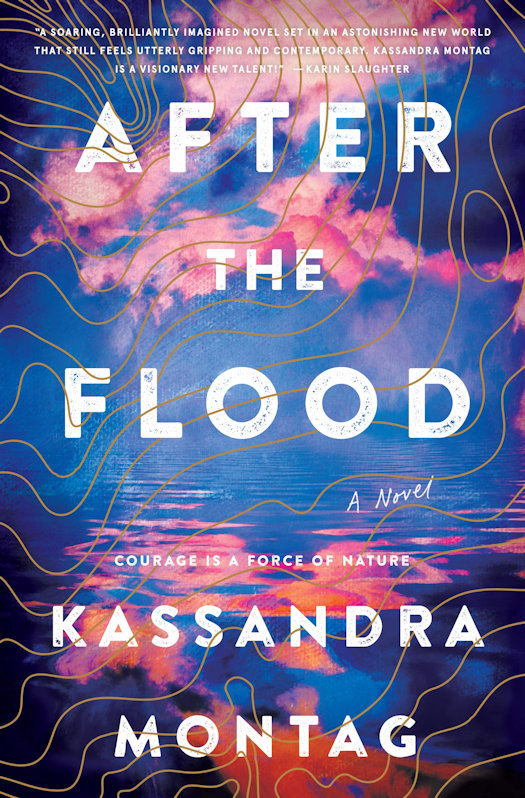 An inventive and riveting epic saga, After the Flood signals the arrival of an extraordinary new talent.

A little more than a century from now, our world has been utterly transformed. After years of slowly overtaking the continent, rising floodwaters have obliterated America’s great coastal cities and then its heartland, leaving nothing but an archipelago of mountaintop colonies surrounded by a deep expanse of open water.

Stubbornly independent Myra and her precocious seven-year-old daughter, Pearl, fish from their small boat, the Bird, visiting dry land only to trade for supplies and information in the few remaining outposts of civilization. For seven years, Myra has grieved the loss of her oldest daughter, Row, who was stolen by her father after a monstrous deluge overtook their home in Nebraska. Then, in a violent confrontation with a stranger, Myra suddenly discovers that Row was last seen in a far-off encampment near the Artic Circle. Throwing aside her usual caution, Myra and Pearl embark on a perilous voyage into the icy northern seas, hoping against hope that Row will still be there.

On their journey, Myra and Pearl join forces with a larger ship and Myra finds herself bonding with her fellow seekers who hope to build a safe haven together in this dangerous new world. But secrets, lust, and betrayals threaten their dream, and after their fortunes take a shocking—and bloody—turn, Myra can no longer ignore the question of whether saving Row is worth endangering Pearl and her fellow travelers.

A compulsively readable novel of dark despair and soaring hope, After the Flood is a magnificent, action packed, and sometimes frightening odyssey laced with wonder—an affecting and wholly original saga both redemptive and astonishing.

Kassandra Montag is a poet and novelist. Her work has appeared in Mystery Weekly Magazine, Midwestern Gothic, and Prairie Schooner, among other literary journals. She has won the Plainsongs Award, New Year's Poet Award, and 1877 Award.