Interview with K. A. Doore, author of The Perfect Assassin


Please welcome K. A. Doore to The Qwillery as part of the 2019 Debut Author Challenge Interviews. The Perfect Assassin was published on March 19, 2019 by Tor Books. 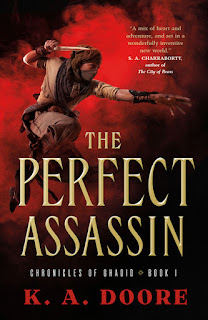 K. A.:  A story about a girl who climbs rainbow mountain and becomes a ballerina – with illustrations and everything. I’m sure it made a lot of sense to me at the time in 2nd grade.

K. A.:  I’m a pantser, through and through, to the point where I can’t even write a synopsis until I’ve at least written a draft zero.

I did try plotting, once. And that story is still just an outline somewhere, which only proves I should never do that again. Know your process, folks.

K. A.:  That first draft. It used to be the easiest thing, and the most fun, but now that the gap between my final drafts and my first drafts has widened so much, it’s hard to look past the hot, steaming mess that is Draft Zero and just get it down. But alas, as much as I’ve tried, you can’t edit a blank page.

K. A.:  I love Annie Dillard’s lyrical writing style and I love Seanan McGuire’s fast-paced and tight plots, so please blame both for my continuous attempts at writing both lyrical and fast-paced. Whether or not I ever actually achieve that goal is up to the reader, but I’m going to keep trying!

K. A.:  Oh, I can do one better and describe the whole trilogy with five words:
Queer! Assassins! Saving! The! Day!

TQ:  Tell us something about The Perfect Assassin that is not found in the book description.

No really, I’ve tried to be very clear that I’m a queer author writing books with queer characters in the hopes that readers looking for that will find it. It’s not always obvious in the descriptions – which I absolutely 100% get – so I’ve been looking for other ways to make it obvious. Which has mostly involved a lot of shouting and waving my arms.

TQ:  What inspired you to write The Perfect Assassin? What appeals to you about writing Fantasy?

Okay I guess I should explain that one, huh? Fun fact: even though TPA is my debut, it’s not the first book I wrote in the trilogy. I’d originally written a standalone and when Tor expressed interest in acquiring it, they also expressed interest in turning it into a trilogy. I couldn’t see a way to write two sequels from that starting point, but my editor suggested I write a prequel instead and specifically about Amastan.

That was all the inspiration I needed. Amastan pretty much told me his story himself and here we are.

As for what appeals to me about writing fantasy, it’s the freedom to make and explore a whole world. You can do anything, be anyone, explore any concept – it’s limitless and vast and breathtaking. I’ve tried writing other genres, but fantasy always creeps back in. A little bit of magic, I think, is necessary to keep things interesting.

TQ:  What sort of research did you do for The Perfect Assassin?

K. A.:  I spent a solid chunk of months living in the university library. Thank the patron saints for inter-library loans. I also lived in the Sonoran Desert for six years which, while not quite the same sort of desert as Ghadid is set in, still helped me understand and write the extreme heat and weather.

TQ:  Please tell us about the cover for The Perfect Assassin.

K. A.:  It’s very striking – literally, hah. Larry Rostant is the cover artist, and he did both the photography as well as the design. He’s kind of amazing.

As you can probably guess, it shows the main character Amastan. But what most people tend to miss is that, while the red is pretty, yes, it’s actually plot-related. There are spirits in the story called jaan, which, left unattended, quickly become deadly. Most of the time they’re invisible and you wouldn’t even know they were there until it’s too late. But when they’re particularly new and strong, they look like a smear of red.

Which means technically there are two characters on the cover.

TQ:  In The Perfect Assassin who was the easiest character to write and why? The hardest and why?

K. A.:  The easy: Tamella aka the Serpent of Ghadid aka Amastan’s teacher. I had a pretty good idea of her as a badass woman who did amazing stuff in her own time, but has since been forced to keep a low profile. It was just so easy to channel her frustration, but also her acceptance of her new role.

The hardest was Yufit. I had to write several scenes from his point of view just so I knew what was going through his head. It’s always been hard for me to write the love interest, because the main character is so infatuated that they can forget the other person has a life of their own. So balancing that self-centeredness, but also making certain Yufit still has his own character moments, was a hard line to walk.

TQ:  Which question about The Perfect Assassin do you wish someone would ask? Ask it and answer it!

Q: Which character in TPA could you beat in a fair fight?

A: Literally none of them. Barag is the closest, but he’d probably offer me tea and then his wife would shank me. Which would be her version of a fair fight, so.

TQ:  Give us one or two of your favorite non-spoilery quotes from The Perfect Assassin.

K. A.:  Let’s go with weather-related, because weather plays a big part in the story:

“Dusk fell like dust, coating the world in a darkness that accumulated in one continuous, ever-thickening, layer. The clouds hadn’t broken yet, but they were denser now, billowing and dark. They hunched on the horizon like a brooding crow, flashes of light briefly illuminating their depths.”

K. A.:  The second book – The Impossible Contract – which follows Thana on her own adventures, will be out next November, and I just turned in edits on the third book – The Unconquered City – which will be out summer of 2020. After that, I’ve got a few projects bubbling on the back burner, so we’ll just have to see! 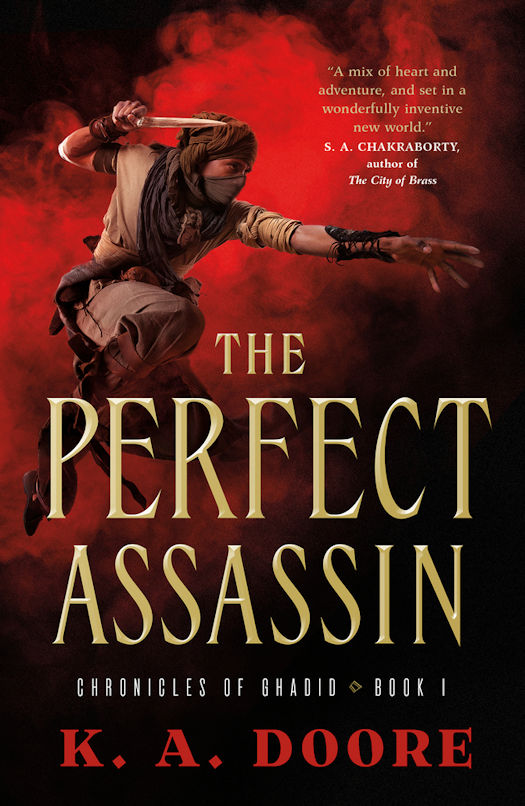 A novice assassin is on the hunt for someone killing their own in K. A. Doore's The Perfect Assassin, a breakout high fantasy beginning the Chronicles of Ghadid series.

Divine justice is written in blood.

Or so Amastan has been taught. As a new assassin in the Basbowen family, he’s already having second thoughts about taking a life. A scarcity of contracts ends up being just what he needs.

Until, unexpectedly, Amastan finds the body of a very important drum chief. Until, impossibly, Basbowen’s finest start showing up dead, with their murderous jaan running wild in the dusty streets of Ghadid. Until, inevitably, Amastan is ordered to solve these murders, before the family gets blamed.

Every life has its price, but when the tables are turned, Amastan must find this perfect assassin or be their next target.

“The Perfect Assassin is a thrilling fantastical mystery that had me racing through the pages.” —S. A. Chakraborty, author of The City of Brass

“Full of rooftop fights, frightening magic, and nonstop excitement and mystery, I absolutely loved it from start to finish!” — Sarah Beth Durst 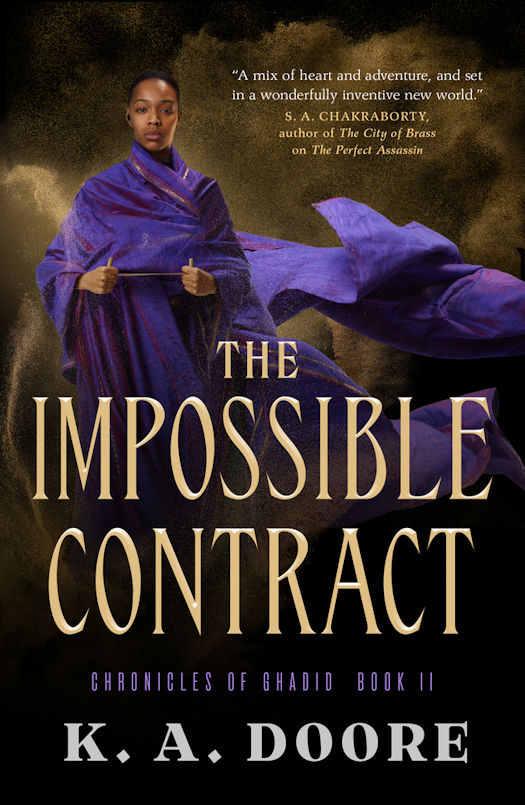 Second in K. A. Doore's high fantasy adventure series the Chronicles of Ghadid, a determined assassin travels to the heart of the Empire in pursuit of a powerful mark, for fans of Robin Hobb, Sarah J. Maas, and S. A. Chakraborty

Thana has a huge reputation to live up to as daughter of the Serpent, who rules over Ghadid’s secret clan of assassins. Opportunity to prove herself arrives when Thana accepts her first contract on Heru, a dangerous foreign diplomat with the ability to bind a person’s soul under his control.

She may be in over her head, especially when Heru is targeted by a rival sorcerer who sends hordes of the undead to attack them both. When Heru flees, Thana has no choice than to pursue him across the sands to the Empire that intends to capture Ghadid inside its iron grip.

A stranger in a strange city, Thana’s only ally is Mo, a healer who may be too noble for her own good. Meanwhile, otherworldly and political dangers lurk around every corner, and even more sinister plans are uncovered which could lead to worldwide devastation. Can Thana rise to the challenge—even if it means facing off against an ancient evil? 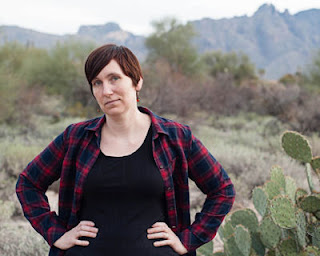 K.A. Doore grew up in Florida, but has since lived in lush Washington, arid Arizona, and cherry-infused Michigan. While recovering from climate whiplash, she’s raised chickens, learned entirely too much about property assessment, photographed cacti, and now develops online trainings.