Please welcome Timothy S. Johnston to The Qwillery. The War Beneath was published by ChiZine Publications on January 1, 2019. 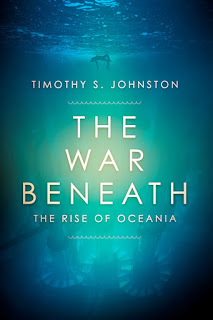 TQ:  Welcome back to The Qwillery. The War Beneath, the first novel in your new The Rise of Oceania series, was recently published. Describe The War Beneath using only 5 words.

TQ:  Tell us something about The War Beneath that is not found in the book description.

Timothy:  Every scene takes place underwater, either in a submersible, a habitat, or while swimming. There is no exposition or dialogue above the surface or on land at all.

TQ:  You seem to like putting your characters in inhospitable environments. Why did you choose under water for this series?

Timothy:  For this book, I imagined a world suffering from global warming and rising ocean levels. To me the oceans are the next frontier for humanity. There are untold resources there that we will undoubtedly look to as temperatures continue to increase on land. Another reason might be that because the characters live in an intense undersea world, and are always under greater pressures than at the surface, this mirrors the pressure of the situations they’re dealing with. It ramps up tension and keeps readers turning the pages.

TQ:  What kinds of research did you do for The War Beneath?

Timothy:  I had to study marine exploration over the past century or so. I had to learn about innovations in the past and what might be coming in the near future. Also, I had to understand what living under pressure — in a saturation environment — would mean for people. The inhabitants of the undersea world can’t swim to the surface in an emergency (they would get The Bends) and I had to learn about this and be able to explain it without interrupting the adventure and excitement. I also had to study the undersea environment: the bathymetry, marine life, geology, and so on. The research and plotting always takes longer than the actual writing, to make it all seem more realistic. It was lots of fun!

TQ:  In a prior interview you stated that you are a plotter. Did any of the characters in The War Beneath surprise you?

Timothy:  Oh yes! This always happens when writing. Side characters turn out to be very likeable, or they turn out to be better villains than I had originally planned. I don’t want to say who, though, but when writing, a character will suddenly tap you on the shoulder and say, “Hey, what if I did this? Wouldn’t that be cool?” A novel is an organic thing once you begin writing. Even though I have the broad brush strokes down before writing the first word, each character takes on a life of their own and helps direct the story in a natural, dramatic, and tense fashion.

TQ:  Please tell us about the cover for The War Beneath.

Timothy:  Erik Mohr of Made by Emblem in Toronto designed it. I think it’s brilliant, but I have to confess that my publisher and the artist are responsible for it. The floating corpse near the surface was a fantastic choice. It ensures readers know that this is an underwater thriller, especially with the structure partially hidden by the depths.

TQ:  Does The War Beneath touch on any social issues?

Timothy:  The most emotional theme in this book is one of fathers and sons. It’s something I think about sometimes. Growing up, we look with admiration and adoration at our fathers. The position a father reaches in life also puts great pressure on sons. How are we supposed to achieve what our dads have? How are we supposed to exceed their accomplishments? This is particularly difficult when the father is famous or has reached monumental goals in life. I feel for children of celebrities, for instance. However, the corollary of this is, What if the father has committed an unspeakable crime? Something the son is ashamed of? How does it affect the son’s growth and development? This is a major theme in The War Beneath. The title has a dual meaning, and this is it.

TQ:  You are an unrepentant genre bender. Where does The War Beneath fit in the genre spectrum?

Timothy:  It’s a thriller, and it has a science/technological element, so it is science fiction thriller. It is for mainstream readers, however, so it might also be called a technothriller. It’s a grand underwater adventure though. I describe it as Mission: Impossible meets The Hunt for Red October, or sometimes as James Bond underwater. I think its appeal is very broad. There is a healthy dose of science in this book too.

TQ:  Your prior series, The Tanner Sequence, was a trilogy. What do you have planned for The Rise of Oceania?

Timothy:  This is a series. I’ve already written the first three books and they are either out or in the pipeline. The Savage Deeps is coming November 2019. I’m also hoping to extend it to six books in total, but we’ll have to see.

TQ:  Do The Rise of Oceania and The Tanner Sequence share anything thematically?

Timothy:  The environments in my books seem to always be hostile. By that I don’t mean that the ocean is hostile; I mean that it’s dangerous. If a character goes outside for too long, they’ll die. This adds tension and heightens drama in any situation. As a writer, I enjoy this. As a reader, I think it makes for a page-turner. Several reviewers have already said they found themselves holding their breath during underwater action sequences. This pleases me to no end.

TQ:  Give us one or two of your favorite non-spoilery quotes from The War Beneath.

When I had awoken that morning, I’d assumed it would be the same as any other day. Now here I was, mentally preparing myself to pursue and kill a traitorous operative of TCI. A former friend. It was surreal.

A minute later the warsub began searching with her active sonar, pinging away once every couple of seconds. No doubt they had detected us heading for the seamount and had heard our thrusters cut out. Since we were now a part of the bottom terrain, however, I hoped that they could not see us.
And then the unthinkable happened.
She started to drop her mines.

Timothy:  The Savage Deeps is coming in November 2019. Fatal Depth is coming in 2020 (both from ChiZine Publications.) I am currently making the book-signing rounds in Southern Ontario. I love meeting other fans of science fiction thrillers.

Timothy:  Thanks for having me again! I hope people will enter their names in my draw for TSJ swag! I have new stuff to give away. Also visit my blog at www.timothysjohnston.com/blog to read my movie, book, and videogame reviews and also to enter my contests.


The War Beneath
The Rise of Oceania 1
ChiZine Publications, January 1, 2019
Hardcover, Trade Paperback, and eBook, 350 pages 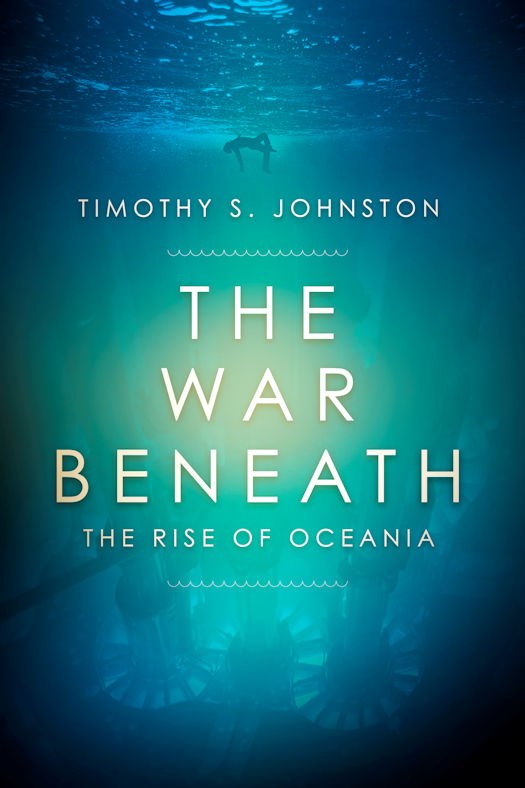 Living and working underwater can be a dangerous thing. First the bulkheads sweat, then there’s a trickle of water . . .

. . . and then in an instant you’re gone. The only thing left is a bloody pulp in the dark water and crushed bone fragments on the seafloor.

And you can’t bolt to the surface in an emergency. . . . The bends will get you.

But that’s not the worst. When you’re living underwater and also working as a spy for your city, that’s when things get really dangerous.

Truman McClusky has been out of the intelligence business for years, working the kelp farms and helping his city Trieste flourish on the shallow continental shelf just off the coast of Florida. Until his former partner shows up, that is, steals a piece of valuable new technology and makes a mad dash into the Atlantic. Before he knows it, Mac ends up back in the game, chasing the spy to not only recapture the tech, but to kill his former friend.

But when he learns the grim truth behind the theft, it sends his stable life into turmoil and plunges him into an even deadlier mission: evade the submarines of hostile foreign powers, escape assassins, and forge through the world’s oceans at breakneck pace on a daring quest to survive, with more lethal secrets than he thought possible in his pocket.

The future of the city depends on McClusky . . . if he can make it back home. 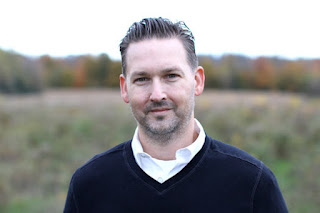 Timothy S. Johnston is a lifelong fan of thrillers and science fiction thrillers in both print and film. His greatest desire is to contribute to the genre which has given him so much over the past four decades. He wishes he could personally thank every novelist, screenwriter, filmmaker, director and actor who has ever inspired him to tell great stories. He has been an educator for twenty years and a writer for thirty. He lives on planet Earth, but he dreams of the stars. Visit www.timothysjohnston.com to register for news alerts, read his blog and reviews, and learn more about his current and upcoming thrillers. Timothy is the author of THE WAR BENEATH and THE SAVAGE DEEPS. His futuristic murder mystery/thrillers include THE FURNACE, THE FREEZER, and THE VOID. Follow Timothy on Facebook @TSJAuthor and Twitter @TSJ_Author. 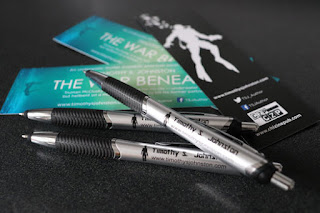 How:
Who:  The giveaway is open to all humans on the planet earth with a United States or Canadian mailing address.


*Giveaway rules and duration are subject to change without any notice.*
Posted by Qwill at 6:30 AM