Review: The Hammer and The Blade by Paul S. Kemp 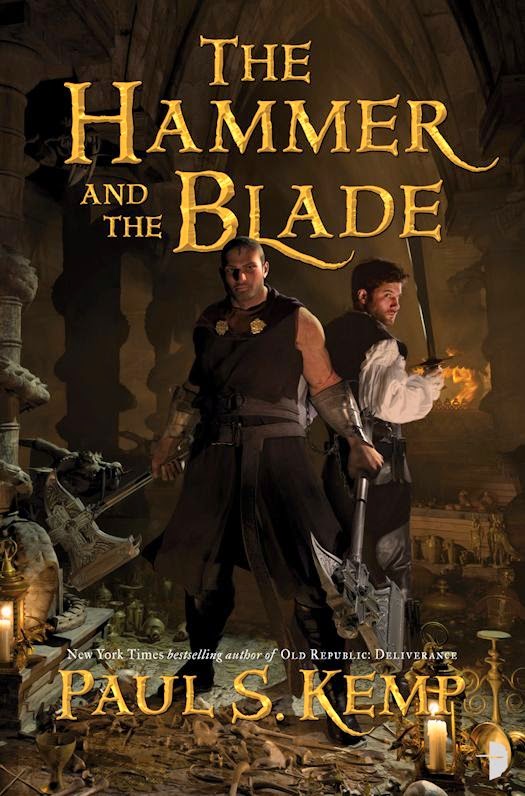 Retire to a life of luxury.

Unfortunately for Egil and Nix, when the demon they kill has friends in high places, retirement is not an option.

The Hammer and The Blade ushers in the return of Sword & Sorcery fantasy in a most awesome way. It feels like the perfect 80s action film. It has a pair of unlikely heroes, Nix the Quick and Egil of Ebenor, the Momentary god. Nix, a thief raised in the slums, is quick with both his blades and tongue. Egil is a somber priest of a dead god and wields duel hammers, and a crowbar at times. Like any respectable scoundrels, they spend their time robbing tombs, getting drunk and arguing with each other over the past mishaps and bad business decisions they've made, like buying a rundown bar.

Paul S. Kemp is an obvious fan of the fore-fathers of Sword & Sorcery fantasy and he shows it in his writing. He nails all of the stereotypes of this particular genre with the duel anti-heroes, tombs full of boobie traps, evil wizards using dark magic, and demons begging to be slain, oh and the snarky dialogue, don't forget that. Even if buddy adventure fantasy isn't your cup of tea, you need to give it a try. We all get a little burnt out on the EPIC fantasies that spend entire chapters describing in minutia the importance of a long-forgotten kingdom's cold remedy, and how it will play a major role four books later in a nine-book series. Kemp reminds us reading fantasy can be a fantastic ride that doesn't need to put the world at risk of being destroyed to be entertaining.

Kemp stays true to the sub-genre's strengths by focusing on the story, while elevating it with his characters' depth. The world-building is as deep as the story requires, which means there's just enough to to tell the story, making it refreshing. It's nice to be reminded what you actually need to know to tell a good story. Kemp even manages to bring up an important issue like the objectification of women in a sub-genre that tends to shy away from such issues.

The Hammer and The Blade is a totally rad fantasy, I'm sorry I couldn't help throwing in one more reference to my love of the 80s action films of yore. Due to the high level of descriptive violence and minor use of adult language and implied sexual situations, I would recommend it to adults. I'd also recommend it to anyone who likes 80s action films, Sword & Sorcery fantasy or embracing all the fun life has to offer.