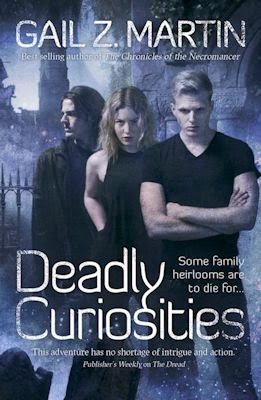 Going from Short to Long
By Gail Z. Martin

Deadly Curiosities began as a short story. Now it’s a novel, soon to be a series. And I’ve been asked…is it hard to go from short to long?

I’d have to say, “No—at least, not when there are so many stories begging to be told.”

The first Deadly Curiosities story, “Steer a Pale Course” was set in the 1700s and I wrote it for the Rum and Runestones anthology. The prompt was pirate and magic, and it’s the first story in which the shop Trifles and Folly shows up, along with a younger Sorren who is working with a mortal partner who is the many-times great-relative of Cassidy Kincaide in the novel. Two more stories, “Among the Shoals Forever” for the Mammoth Book of Ghost Stories by Women, and “The Low Road” for the Spells and Swashbucklers anthology, followed in that time period (so far.)

I wrote “Vanities” for the British Fantasy Society’s The Bitten Word anthology, which goes back to Sorren’s first work with the Alliance, when he was a newly turned vampire, back in 1565 Antwerp. “Wild Hunt” and “Dark Legacy” were written as stand-alone short stories in that time period (with more to come).

“Buttons” was the first Deadly Curiosities story that I wrote in modern-day Charleston, for Solaris Books’ award-winning Magic: Esoteric and Arcane anthology. They liked the story well enough to ask me to do the novel, and then a series. Since then, I’ve written two more modern-day Cassidy stories for anthologies: “Retribution” for Athena’s Daughters from Silence in the Library Publishing, and “The Restless Dead” for Realms of Imagination from Dark Oak Press, both of which come out later this year. There’s a free novella, “The Final Death” on Wattpad.com, and two stand-alone short stories, “Coffin Box” and “Wicked Dreams”. (All the short stories except the two upcoming anthologies are available individually on Kindle/Kobo/Nook in ebook.)

So by the time I wrote Deadly Curiosities, the novel, I had already written close to 300 pages in that world, albeit in a couple of different time periods. Sorren, who is nearly 600 years old in Deadly Curiosities, is the common thread that binds the stories and times together. One reviewer mentioned that Deadly Curiosities didn’t read like a first book. In a very real way, it isn’t, exactly, because I’ve been inhabiting that mental space for several years now.

Of course, there are differences in how an author handles plot, character, pacing and all that good stuff between a 30 page short story and a 400 page book. But for me, that’s mostly a matter of scale.

I have so much fun walking through a museum or an historic home or an antique show and finding new objects that could be haunted or cursed for a new short story or in the next book. (OK, my idea of a fun day out is a little warped, but I’m a writer. Everything goes into the mental black box, goes around and around, and comes out through the fingertips.) In that sense, there are an unlimited number of stories to be told, because there are so many really cool items that would be perfect for causing mayhem.

Some tales can be told in just 30 or 40 pages. Others are complex enough that they require 400. When I write a novel, I’m able to bring in more elements, more characters, and have a more complicated path to the resolution. In a short story, the problem has to be limited enough in scope, and the solution direct enough that we can get to an ending fairly quickly. It’s fun to juggle writing both forms—keeps me on my toes!

I’ll be celebrating the launch of my new books the whole week of June 22-29 with more than 30 different guest blog posts, a Facebook launch party featuring prizes, guest authors and surprises, podcasts, three different excerpts, a Reddit give-away/AskMeAnything and a Goodreads party/give-away. Get all the details at www.AscendantKingdoms.com, follow me on Facebook.com/WinterKingdoms or on Twitter @GailZMartin!

And I’ll be signing Reign of Ash and Deadly Curiosities in major cities across the U.S. and in England, Wales and Scotland this summer—the full book tour schedule is on my website, so please stop by and say hello! 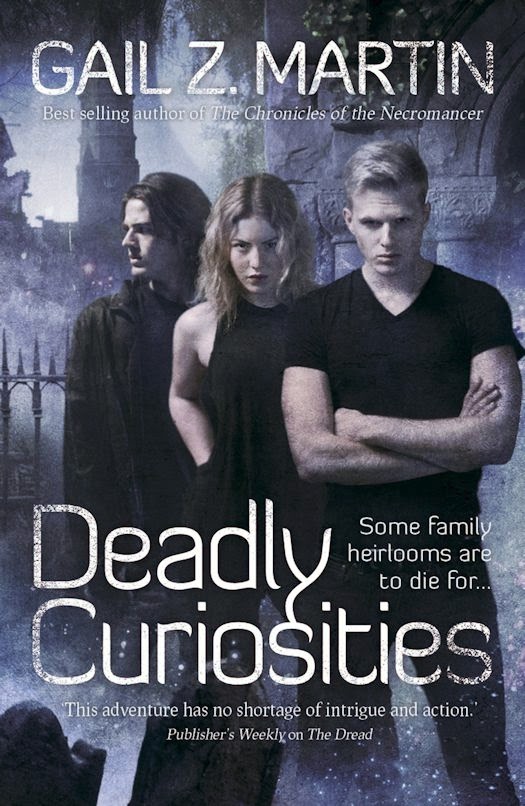 Welcome to Trifles & Folly, and antique and curio shop with a dark secret. Proprietor Cassidy Kincaide continues a family tradition begun in 1670 - acquiring and neutralizing dangerous supernatural items. It's the perfect job for Cassidy, whose psychic gift lets her touch an object and know its history.

Together with her business partner Soren, a 500-year-old vampire and former jewel thief, Cassidy makes it her business to get infernal objects off the market. When mundane antiques suddenly become magically malicious, it's time for Cassidy and Soren to get rid of these Deadly Curiosities before the bodies start piling up.

Gail Z. Martin writes epic and urban fantasy, steampunk and short stories. She is the author of the Chronicles of the Necromancer series, the Fallen Kings Cycle series and the Ascendant Kingdoms Saga series of epic fantasy books, as well as the Deadly Curiosities urban fantasy world and coming in 2015, Iron and Blood, a Steampunk novel, co-written with Larry N. Martin. Gail is a frequently contributor to US and UK anthologies. She also writes two series of ebook short stories: The Jonmarc Vahanian Adventures and the Deadly Curiosities Adventures.

Find her at www.ChroniclesOfTheNecromancer.com, on Twitter @GailZMartin, on Facebook.com/WinterKingdoms, at DisquietingVisions.com blog and GhostInTheMachinePodcast.com. She leads monthly conversations on Goodreads https://www.goodreads.com/GailZMartin and posts free excerpts of her work on Wattpad http://wattpad.com/GailZMartin. An original novella set in the Deadly Curiosities universe, The Final Death, is available free on Wattpad here: http://www.wattpad.com/story/15334006-the-final-death

What:  Three entrants will win a Mass Market Paperback copy of Deadly Curiosities by Gail Z. Martin from Solaris Books.

Who and When:  The contest is open to all humans on the planet earth with a mailing address. Contest ends at 11:59PM US Eastern Time on July 6, 2014. Void where prohibited by law. No purchase necessary. You must be 18 years old or older to enter.