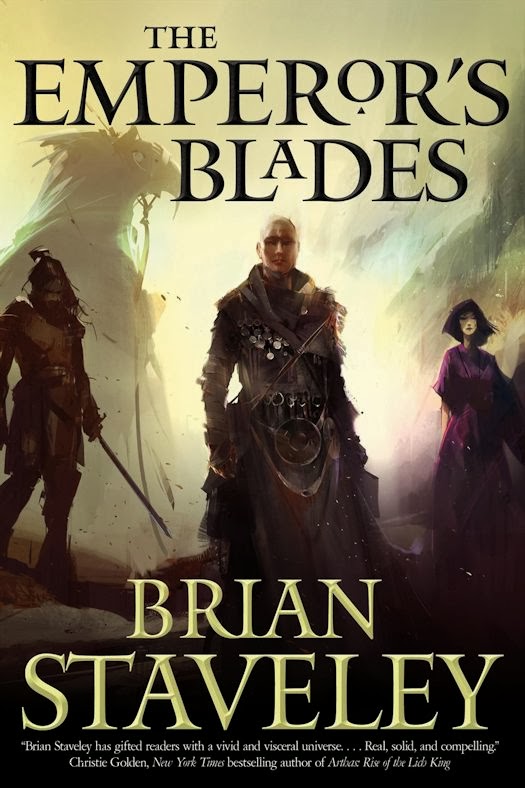 Annur has been ruled by the golden-eyed descendants of the goddess, Intarra, for centuries. The current Emperor, Salintun has three children, Adare, his daughter, has put her clever wit to use studying the politics of the Imperial city. His heir, Kaden, at the age of ten, was sent far away to the austere Ashk’lan monastery set deep in the Bone Mountains to apprentice to the Shin monks. Living there for eight years has taught him discipline and brought about great clarity, however he has not yet mastered the vaniate; the emptying of the mind. The youngest, Valyn, was sent to the Kettral, an elite and brutal fighting squad that soar on their oversized birds of prey during their black-ops missions. Still a cadet, he has one more deadly obstacle to face before becoming full Kettral, Hull’s Trial. When the unthinkable occurs and their father is murdered, the empire is thrust into jeopardy. It falls on the three siblings to uncover the cunning and unscrupulous plot and most importantly stay alive in the process.

The Emperor’s Blades, book one in the Chronicle of the Unhewn Throne, lays the groundwork for a grand epic fantasy. The world building is fascinating and is propelled by the three main characters’ points of view. This allows the story to progress rapidly while giving the reader unique POVs through which to digest the complicated workings, historic facts, and political machinations the siblings face. Added to the mix are some scary and awesome indigenous and non-indigenous creatures which insert another compelling layer of excitement into the story. I was sucked into the novel’s world from the very first chapter of The Emperor’s Blades. Much like quicksand, the story grabbed me and drew me in steadily. I didn’t struggle however; I willingly let the pages envelop me until I was totally immersed. I’ve dubbed this phenomenon the 'quicksand effect' and I urge fantasy lovers to buy The Emperor’s Blades and experience it for themselves.