Review: From Up on Poppy Hill from Studio Ghibli - September 7, 2013 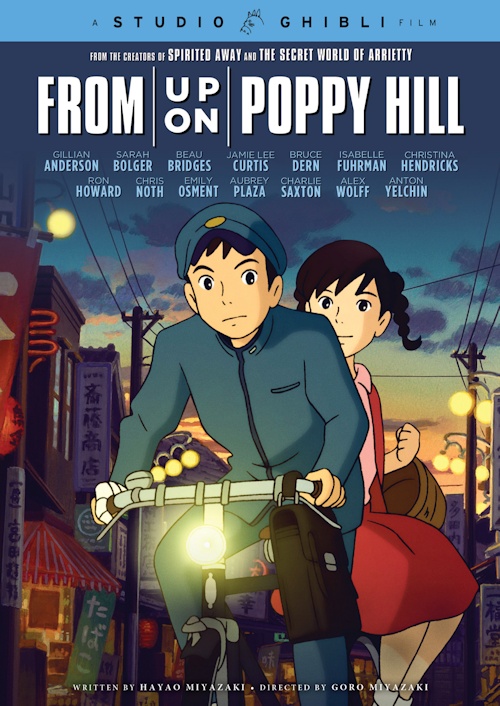 The dazzling, hand-drawn FROM UP ON POPPY HILL is set in Yokohama in 1963. Japan is picking itself up from the devastation of World War II and preparing to host the Olympics. The mood is one of both optimism and conflict as the young generation struggles to throw off the shackles of a troubled past. Against this backdrop of hope and change, a friendship begins to blossom between high school students Umi (Sarah Bolger) and Shun (Anton Yelchin) - but a buried secret from their past emerges to cast a shadow on the future and pull them apart. From a screenplay by Academy Award®-winner Hayao Miyazaki, the English language version is directed by multiple Academy Award®-winner Gary Rydstrom from a script adaptation by Karey Kirkpatrick (James and the Giant Peach, Chicken Run, Charlotte's Web) and features an all-star English voice cast including Gillian Anderson, Sarah Bolger, Beau Bridges, Jamie Lee Curtis, Bruce Dern, Isabelle Fuhrman, Christina Hendricks, Ron Howard, Chris Noth, Emily Osment, Aubrey Plaza, Charlie Saxton, Alex Wolff and Anton Yelchin. Frank Marshall and Kathleen Kennedy executive produced.  - From the Press Release

Umi Matsuzaki and Shun Kazama, voiced perfectly by Sarah Bolger and Anton Yelchin, are high school students who live in a changing Japan where old world traditions are set against a backdrop of transformation brought about by the impending Tokyo Olympics and recovery from war.  The two are brought together by the fight to prevent the Latin Quarter, a club house of eclectic learning for the male population of their school, from being demolished.  The story of Umi and Shun resonates with deep emotion. You can't help connect to these young people as they deal with some very difficult issues with thoughtfulness, grace and humor. 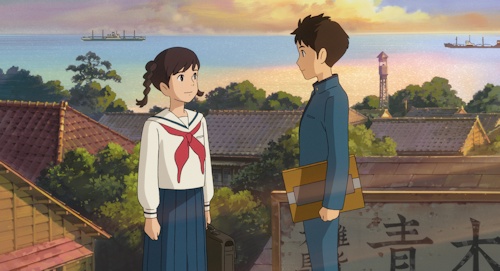 While Umi and Shun are the main characters, there was a lovely cast of secondary characters as well to populate and flesh out the film. Umi is responsible for taking care of the borders in the house where she lives. They are a colorful and fun group. The Chairman of the high school is wonderfully voiced by Beau Bridges. Ryoko Matsuzaki, Umi's mother, is lovingly voiced by Jamie Lee Curtis. There are wonderful scenes at the high school - in the Latin Quarter, at particular rowdy debate and more. The views of 1963 Yokohama (where the film is primarily set) are simply beautiful. There is incredible attention to detail in each moment of From up on Poppy Hill.


Trinitytwo: From up on Poppy Hill is visually dazzling. It is an absolutely beautiful film and although it is not based in a magical setting, as many of the Studio Ghibli films are, it is enchanting. It tells a tale that is bittersweet, passionate, funny, moving, and ultimately triumphant.  From Up on Poppy Hill is a stunning coming of age story whose theme will appeal to both young people and adults. Its tender message and beautiful delivery makes it (by far) my favorite animated film of the past few years.

Qwill:  I highly recommend From Up on Poppy Hill. While it may not be for the youngest viewers (as is Ponyo) this beautiful and nostalgic period film will sweep you up in Umi's and Shun's story. I have to agree with Trinitytwo - this is one of my favorite recent animated films.


From up on Poppy Hill was directed by Goro Miyazaki and written by Hayao Miyazaki. It is their first feature-length collaboration. The film is based on the a manga series of the same name illustrated by Chizuru Takahashi and written by Tetsuro Sayama.

1)  Because From Up on Poppy Hill is one of the few hand drawn animated films in recent years, the Storyboards were fun to view.

2)  The announcement to the media of the theme song revealed the amazing fact that the film was in creation during the Fukushima I Nuclear Power Plant meltdown following the devastating March 2011 earthquake and tsunami in Japan.

3)  The English Voice Cast featurette was extremely interesting. It was great fun to watch the voice actors work and see how the Japanese film was dubbed in English.

4)  Hayao Miyazaki's Speech after the staff screening is terrific. (Exclusive to the Blu-ray edition.)


Extras to avoid: In the director's interview, Goro Miyazki, answered questions in which only the answers were translated in the form of English subtitles making it both awkward and confusing. In the segment concerning Yokohama's historical footage, Japanese subtitles competed with English subtitles, (both in white lettering,overlapping on the bottom of the screen) making for extremely difficult reading. The Japanese trailers were redundant and the US trailer is a tad too long.


From Up on Poppy Hill is available as of September 3, 2013 in Blu-ray+ DVD combo and DVD. The film was provided to The Qwillery by Cinedigm/GKIDS, who have released the film in North America. We watched both the DVD and Blu-ray versions of the film for this review.

Review by Trinitytwo and Qwill

Labels: From up on Poppy Hill, Goro Miyazaki, Hayao Miyazaki, review
Email ThisBlogThis!Share to TwitterShare to FacebookShare to Pinterest