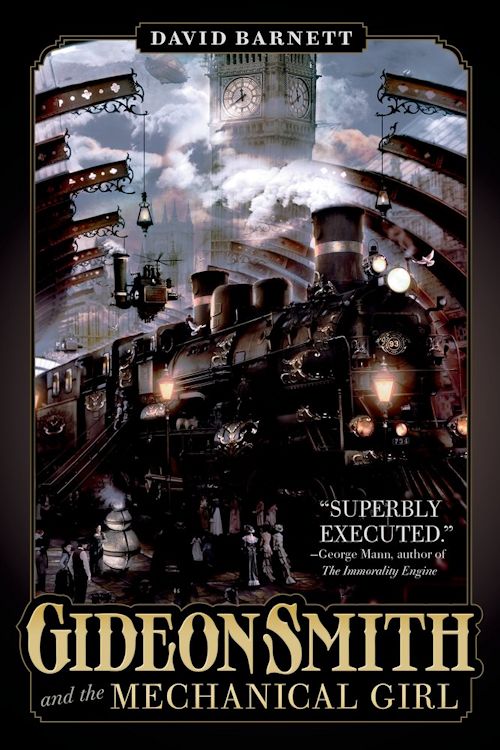 Nineteenth century London is the center of a vast British Empire. Airships ply the skies and Queen Victoria presides over three-quarters of the known world—including the East Coast of America, following the failed revolution of 1775.

London might as well be a world away from Sandsend, a tiny village on the Yorkshire coast. Gideon Smith dreams of the adventure promised him by the lurid tales of Captain Lucian Trigger, the Hero of the Empire, told in Gideon’s favorite “penny dreadful.” When Gideon’s father is lost at sea in highly mysterious circumstances Gideon is convinced that supernatural forces are at work. Deciding only Captain Lucian Trigger himself can aid him, Gideon sets off for London. On the way he rescues the mysterious mechanical girl Maria from a tumbledown house of shadows and iniquities. Together they make for London, where Gideon finally meets Captain Trigger.

But Trigger is little more than an aging fraud, providing cover for the covert activities of his lover, Dr. John Reed, a privateer and sometime agent of the British Crown. Looking for heroes but finding only frauds and crooks, it falls to Gideon to step up to the plate and attempt to save the day...but can a humble fisherman really become the true Hero of the Empire?

David Barnett's Gideon Smith and the Mechanical Girl is a fantastical steampunk fable set against an alternate historical backdrop: the ultimate Victoriana/steampunk mash-up!

The story starts innocently enough with Gideon and his father aboard their ship fishing. Gideon's mother and brother had died years before leaving the two alone together. It is a significant blow when the one constant in his life, his father, mysteriously disappears at sea. Buoyed on false courage Gideon goes in search for the one man he is sure to help him exact revenge for his father, Captain Trigger, hero of the Empire and star of the penny dreadful series that he loves. Captain Trigger is not the dashing hero that Gideon expects but he too has a missing loved one. Gideon and Trigger work together to find their friends, avenge those they lost and try to save the Empire in the process. Danger lurks on every corner and Gideon risks life and limb to uncover the truth.

When I first started Gideon Smith and the Mechanical Girl I thought I had made a terrible mistake. I love steampunk and most Victoriana but Gideon didn't gel with me. I thought the character was absurdly naive by believing the hero from a penny dreadful could actually be a real person. Well...that was at first and then I was gripped. I waited what seemed an age until Gideon met his mechanical girl the form of the lovely Maria. Rescuing the mechanical heroine of the tale was a turning point in the story as Gideon seems to grow up almost overnight. The book's prologue gives us a hint at who Maria actually is but it takes much longer for Gideon to find out the truth. His quest to rescue Maria and to find out what happened to his father forces Gideon to face some quite horrific facts and as a result make him grow up. Gideon's other companions are well rounded and one even has a whole side story on their own.  I don't want to give away who turns up to help Gideon on his quest as it is a fantastic surprise as to who comes on board to help the hapless hero.

Barnett has created a richly detailed world with fun and surprising characters. I normally treat books that merge fantasy and steampunk with trepidation as it takes an extremely clever author to do this well. I can tip my hat at Barnett's valiant effort to create a story that so successfully combines fantasy and steampunk/Victoriana. There is a lot happening in the plot with characters that you love, and those that you want to dislike but they worm their way into your affections. I can't even begin to describe them all as it gives too much away. What I can say is that Gideon Smith and the Mechanical Girl is a cornucopia of fantastical fun. Jump on board and join Gideon on the adventure of a lifetime.
Posted by Melanie at 8:00 AM