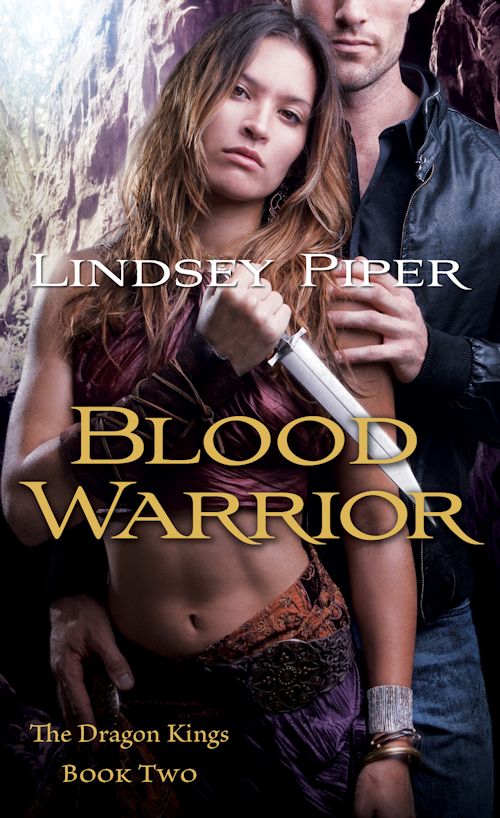 Blood Warrior starts not long after the end of the first book in the Dragon Kings series, Caged Warrior. Tallis Pendray, having fled the scene of the rescue of his niece Nan in book 1, has found the one woman he has been searching decades for. The goddess known as 'The Sun' has been visiting him for twenty years through his dreams, influencing him to kill several of his own kind. He was in fact, involved in the murder of Nan's human husband in Caged Warrior. Tallis decides to take matter into his own hands by seeking retribution on the one person who has controlled his life. No one is more surprised than Tallis when he finds himself on the run the run with the lovely goddess Kavya, protecting her from the brother who wants to her dead.

More is revealed about the history of Tallis, his family and the dragon king race. Through Kavya we come to learn about the powers of the Indranan race and of the Pendray through Tallis. It reminded me a tiny bit of gaming characters where you pick a race and have a main power or skill - the Pendrays are berserkers, Indranans are telepaths, Maleforneys channel lighting and added into this mix are the half breeds like Nan who have multiple powers from both parents. A theme throughout both books is that the dragon kings as a species are dying out.  I couldn't really understand was why this was happening as there was really no explanation as to why the dragon kings had become infertile. Nan, from Caged Warrior, had obviously had a child with a human so I wasn't entirely sure why more weren't doing the same.

The plot is fairly fast paced with a journey starting in India and ending in Scotland. The environment seems to be cast as an alternative character, moving quickly from a tempestuous snow storm to bleak, barren wilderness. Piper uses the weather and landscape to mirror the mood between the two lead characters to good effect. Missing from the story however is any further development of the Aster plot which I think is a bit disappointing.  Aster is a strong antagonist but the plot of this story seems to side track him in favour of Kavya's equally evil brother.

Overall, Blood Warrior is more your traditional PNR with the virginal, misunderstood Kavya and the handsome, rebel in the form of Tallis. While I thought there wasn't enough history in Caged Warrior but liked the fact there was a strong female lead, in Blood Warrior it was the exact opposite. There is much more detail about the the different races but Kavya is much more the 'femme fatale'. Although saying that I have to appreciate any woman who can traipse through a snow storm in India in no more than a sari and slippers and still look gorgeous! There is a lot more happening in this instalment but it seems to end rather abruptly.

I am fairly conflicted about this series. On one hand I like Piper's world building and the history/folklore surrounding the dragon kings but I just don't like the characters that much themselves. I want something compelling that makes me want to cheer them on even though I may not agree with what they are doing. Apart from Tallis the other characters are a bit bland. Even the lovely Kavya is a tad one one dimensional. I am looking forward to book three which will feature 'The Pet' from book 1 and the Giva who is the leader of the dragon kings. From reading the introductory chapters of this third book I get the feeling that Piper has been slowly building the plot and the character development for future books in the series...or at least I hope that is the case. The Dragon Kings series has a little of something for everyone but not consistently over the first two books. While they are definitely PNR Caged Warrior focuses more on the plot, especially of the Asters, while Blood Warrior reverts more back into traditional PNR. If like me, you were looking forward to this plot developing then tread carefully as Blood Warrior doesn't develop the overarching plot. Blood Warrior is solid PNR and sometimes everyone needs a little happily ever after!