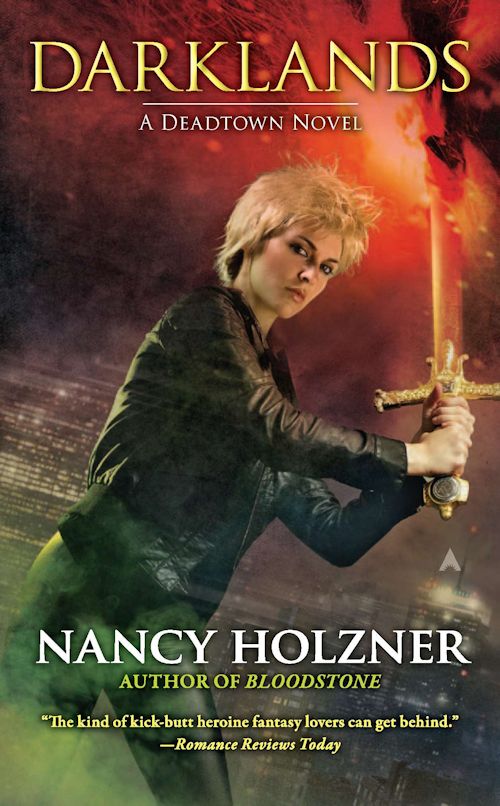 They call it Deadtown: the city’s quarantined section for its inhuman and undead residents. Most humans stay far from its border—but Victory Vaughn, Boston’s only professional demon slayer, isn’t exactly human…

Boston’s demons have been disappearing, and Vicky’s clients are canceling left and right. While fewer demons might seem like a good thing, Vicky suspects foul play. A missing Celtic cauldron from Harvard’s Peabody museum leads her to an unwelcome conclusion: Pryce, her half-cousin and bitter enemy, is trying to regain his full powers.

But Pryce isn’t alone. He’s conjured another, darker villain from Vicky’s past. To stop them from destroying everything she loves, she’ll have to face her own worst fear—in the realm of the dead itself.

I’ve read all but the second book in Nancy Holzner’s Urban Fantasy series Deadtown, so I was really excited to review Darklands, the fourth novel. From the very beginning I remembered exactly why I love this series so much. The novel opens with teenage zombie Tina doing a Career Day presentation to her fellow teenage zombies about demon slayers, with Vicky there to talk about her job. Chaos ensues when a Harpy arrives and begins attacking Vicky, and Tina narrates the entire fight as though it were a planned part of her presentation. I kept wishing a Harpy would show up on command to some of my students presentations – it would be a LOT more entertaining!

And that’s one of the reasons I adore this series - the humor. Vicky is surrounded by hilarious secondary characters, and her teenage zombie sidekick Tina is a hoot. I laughed out loud several times at Tina’s narration of the Harpy attack, all while Vicky is trying to save herself and the rest of the class. And when Vicky summons an Eidolon demon and doesn’t kill him, his grumpy guilt inducing commentary makes for some fun reading.

Another reason this series is a favorite of mine is that it is action packed. Vicky is all kickass heroine, and the pace of the novel will keep you turning the pages to see what happens next. She’s trying to prevent her cousin Pryce from regaining his demi-demon powers, and she has to travel to the realm of the dead, the Darklands, to do so. She’s an expert at modern weaponry but is unable to use any such weapons or shapeshift in the Darklands, and her creativity will have you rooting for her to find what she needs. She also meets a couple of familiar faces along the way, but even if you haven’t read earlier books in the series, you’ll easily be able to keep up, while fans of the series will be happy to see the connections to Vicky’s past.

Then, about a third of the way into the book, I remembered why this series isn’t always an autobuy for me. Vicky consistently makes the choice to act alone and ignores good advice, which always gets her into trouble. That she escapes relatively unscathed is amazing, but the collateral damage is an issue for her loved ones. This becomes all the more frustrating when she recognizes how her behavior in the past has affected her loved ones. At one point she reflects upon how ignoring her Aunt Mab led to devastating events that changed her and her family’s lives forever, yet only a few pages later Vicky is off to face Pryce alone in the Darklands in defiance of Mab’s advice. This foolhardiness leads to serious consequences for her werewolf lover Kane, and made me wonder why she doesn’t stop to think things through. It was so frustrating that over the course of four novels Vicky’s character doesn’t seem to have learned to rely on others.

My only other complaint is that there was a possible rival for Kane’s affections introduced early in the novel, but that plot line seemed to fizzle out and go nowhere. I’m not sure if we’ll see more of that in future books, since Kane is in a tough position thanks to Vicky at the end of the book.

Because I enjoy this series so much and I had a hard time putting Darklands down once I started, I would definitely recommend this book to fans of Urban Fantasy. However, the frustration over Vicky’s stubbornness has me marking the book down a bit.

Please welcome Rebe, The Qwillery's newest reviewer. We are thrilled to have her as part of The Qwillery family!