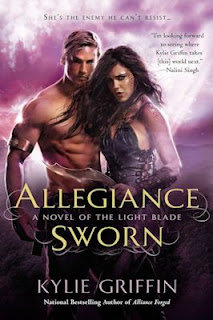 I don't know about you, but one of my favorite parts of any romance novel is the first kiss between the hero and heroine.

While I savor the opening chapters - getting to know the characters and the story line - nothing beats the thrill of watching the hero and heroine's romantic journey grow. The looks, the realisation of desire, the wondering, the physical attraction, until they succumb to temptation and share that first kiss. It’s even better if the attraction is unwanted!

If the author has balanced attraction with conflict then the tension will keep me flipping the pages as I seek the answers to questions like - When will it happen? What will trigger it? Who's going to make the first move? What's it going to be like? Will they both enjoy it? What will happen afterward?

And then the cycle begins again as the relationship develops. I love it!
In ALLEGIANCE SWORN, Arek and Imhara’s have a very Romeo & Juliette–like relationship. Both the hero and heroine are from warring houses, a romance between them doesn’t seem possible, especially since one of them has sworn to kill the other.

Arek’s human, and a Light Blade warrior who’s made it his life’s work to avenge the death of his parents by killing any demon his blade comes into contact with. Imhara is Na’Reish, a full-blood demon, and from the moment they meet Arek vows to kill her.

One could believe that this is a tragedy waiting to happen. But what if one of them presented the other with the chance to kill the demon responsible for the murder of their family – just as Imhara does with Arek?

And what if Imhara wasn’t the evil enemy Arek believed her to be? What if she, and her people defied usual Na’Reish practices, living double lives, preferring to honor the Old Ways, meaning they don’t enslave humans and accept the half-blood Na’Chi?

Does all that make a relationship remotely possible? You bet it does!

And their first kiss is a doozy!


Cautious hope filled Imhara even though Arek’s expression vacillated between confusion and anger, uncertainty and frustration. She’d goaded him with what had to be his greatest fear sleeping with the enemy— and he faced it head-on when she’d half expected him to lash out using his Gift.

Emotions darkened his gaze, and the scents radiating from him lasted no longer than the fraction of a heartbeat before changing, each fighting for dominance as he struggled with her demand.

A few days ago he’d have tried to kill her; now the restraint he showed was progress, and she sent a prayer of thanks heavenward for it. Yet just how far she could push him remained to be seen.

Instinct told her he disliked backing down, but she had to know just how committed he truly was, for both their sakes. Once in Gannec territory, and exposed to the scrutiny of Savyr and scores of other Na’Reishi, acting out of character or refusing to commit to this role one hundred percent would endanger everyone who came with them to the Enclave.

Arek’s throat worked as he swallowed, the pulse there beating a rapid tattoo beneath his skin. “You’re bluffing.” Tension roughened his voice.

The challenge skated across her nerves, like a flame licking fuel.

His nostrils flared and his chest rose and fell on a sharp breath. That, combined with the heat of his hard body, reminded her that although he seemed furious and besieged by doubt, there was a familiar, spicy heat mixed in the scents surrounding him.

Sexual heat. Lust or desire, it didn’t matter; a reaction to something she’d said or done. It was there.

Earlier that week, during their confrontation with Yur, she’d dismissed his response as accidental, unwanted. This time instinct told her there was more to it. Exhilaration stroked heated fingers from her scalp to her breasts, then settled low in her abdomen.

“Am I?” A small smile tugged at her lips. That he wasn’t as repulsed by her presence as she believed him to be sparked wicked thoughts. Her heart began to race. “Then call me on it.”

Her husky tone caught her by surprise as much as it did Arek. Provoking him probably wasn’t fair, but just how he would respond filled her with anticipation, the sort she hadn’t felt in a very, very long time.

He blinked, a muscle in his jaw twitching even as his eyes locked with hers. Deep blue heat simmered in their depths— like the hottest flames of a blacksmith’s forge— a heartbeat before his lips slanted across hers.

His mouth smothered her gasp. She gripped his upper arms, muscular biceps taut and steel hard, intending to push him away. A gut reaction. His hands sank into her hair, his fingers mimicking the hold she had on him— tangling, tightening, taking control; something she detested in other males but accepted from Arek. This time.

His fingers applied steady pressure, angling her head so that her lips parted. His tongue speared into her mouth.

The thrusting motion heated her faster than she thought possible, combusting her from the inside out. She caught his tongue with her lips, sucked at it, stroked it with her own, needing ... no, craving it more than her next breath. He tasted of the same earthy spice that filled her nostrils.

Arek’s deep-throated groan turned up the temperature until her blood boiled in her veins. She arched against him, hissing her pleasure into his mouth, her breasts and nipples so sensitive from the friction the sensation shot straight to her core.

Yet beneath all that, her heart soared. His actions restored hope in her plan and confirmed what instinct had been telling her about this warrior. With his help, her parents’ legacy stood a chance of surviving.

Shoving all that aside, Imhara pushed her fingers deeper into his hair. She wanted to enjoy their kiss.

Do they have a happy ending? Well...that's something you might have to discover for yourself *grin*.

In the meantime, I'm curious – what's your favorite part in a romance novel? Is it the first meeting of the hero and heroine? The first kiss? Something else?

Care to share your thoughts on this? I have a signed copy of ALLEGIANCE SWORN I’d love to give away. And the draw is open internationally!

About The Light Blade 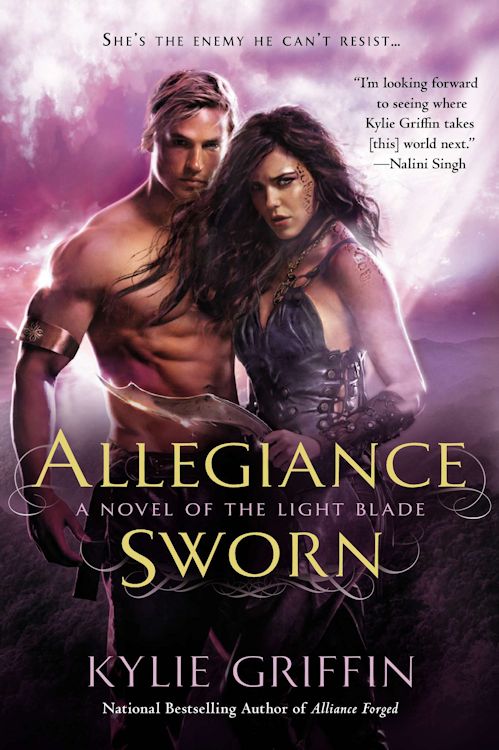 There is no mercy in the demon realm. No escape. In this place of desperation and conflict, anyone who is not purebred is virtually powerless. Until a demon leader seeks to unify the races…

With the alliance of the humans and the half-blood Na’Chi forged, the demon Na’Reish prepare for war by seizing human blood-slaves. Captured during a rescue mission-gone-wrong, Light Blade warrior Arek Barial finds himself claimed by a Na’Reishi female who offers him an unexpected choice.

Raised in the elite ranks of a society she abhors, Imhara Kaal lives a dangerous double life as a Na’Reish Clan-leader and an advocate for a caste-free life that honors the Old Ways. Openly rebelling against the Na’Reish would mean her death, unless she can find an emissary willing to present her petition to the human Blade council.

But Arek isn’t about to blindly follow a demon—despite the intense attraction growing between them. And while hatred for the Na’Reish is all he has ever known, Arek must learn to trust Imhara, or risk the destruction of all three races… 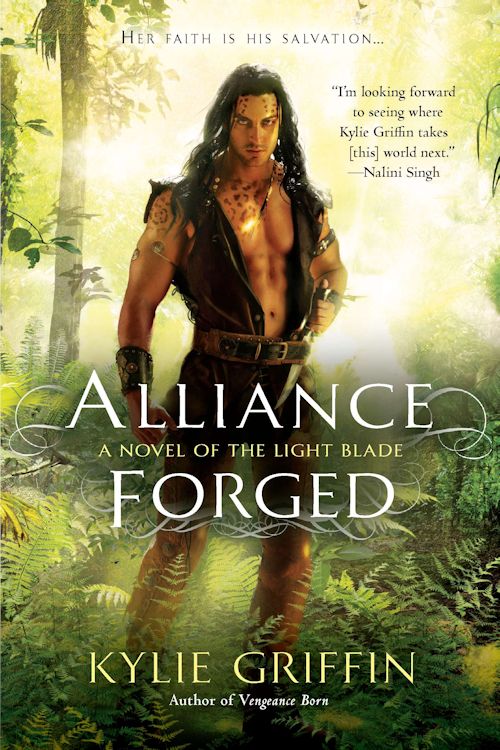 There is no mercy in the demon realm. No escape. In this place of desperation and conflict, anyone who is not purebred is virtually powerless. Until a blind priestess lays claim to a half-breed warrior, body and soul…

Hunted and marked for death by Na’Reish demons for their half-blood heritage, the Na’Chi are searching for a new home—something an alliance offered by the human leader could provide. With both races divided by prejudice, when Light Blade rebels brutally attack the Na’Chi, the alliance seems doomed to fail.

Varian, leader of the Na’Chi, a hybrid race of gifted warriors, is cursed with the darker impulses of his demon heritage. Controlling the part of himself that craves the high of the battle is a struggle he’s afraid he’ll lose—until he meets Kymora Tayn, a priestess driven to serve her deity. While he’s unwilling to trust anyone outside his people, he finds himself drawn to Kymora’s strength and passionate nature, and discovers she has the power to calm the darkness inside him.

When the Na’Reish raid human territory for blood-slaves and kickstart a war, the key to the survival of both races—Na’Chi and human— is an alliance. However, when Kymora is kidnapped, pitting human against human, Varian realizes he must embrace his darker half, not only to save the alliance…but also the woman he loves. 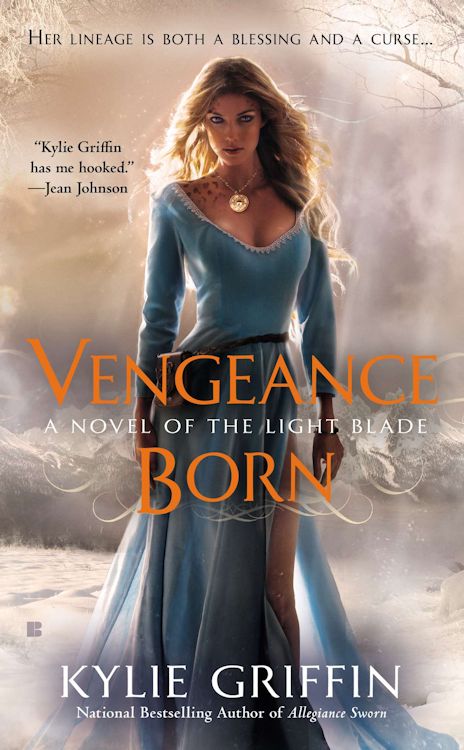 There is no mercy in the demon realm. No escape. In this place of desperation and conflict, anyone who is not purebred is virtually powerless. Until an unlikely champion is born…

Annika, half-blood daughter of the Na’Reish leader, longs for more than her tormented life among her father’s people. Conceived in hatred and bred as a tool of retribution, she’s gifted with a special talent that can heal as well as destroy…

Kalan is a Light Blade warrior who knows the future of humankind depends on him alone. Incursions into human territory and raids for blood-slaves by the Na’Reish horde have increased. As Chosen, leader of his people, he faces the task of stopping the demons.

When Annika learns Kalan is a prisoner in her father’s dungeon, she agrees to free him in exchange for his protection. Now, marked for death for helping him, Annika must learn to trust Kalan as they journey to the border and discover a shocking truth that could throw the human race into a civil war…


Links are to the Mass Market Paperback 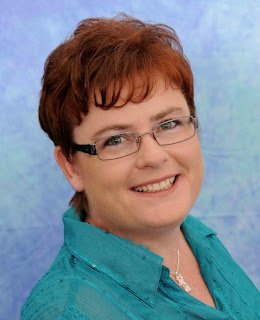 Kylie Griffin’s obsession with all things paranormal/fantasy started at an early age, when she used to imagine the jacaranda tree in her front yard was a spaceship used to defend the world from invading enemies. Writing stories seemed a natural extension to her childhood adventures.

Today, she’s a primary school teacher sharing her love for the written word with young children. In her spare time, she writes and reads all things paranormal.

Kylie lives in a small rural village in outback New South Wales, Australia, where she volunteers in a number of emergency service organizations in her local community. Visit her website at www.kyliegriffin.com

What:  One commenter will win a copy of Allegiance Sworn (The Light Blade 3) from Kylie.

Who and When:  The contest is open to all humans on the planet earth with a mailing address. Contest ends at 12:00AM US Eastern Time on Wednesday, April 16, 2013. Void where prohibited by law. No purchase necessary. You must be 18 years old or older to enter.


*Giveaway rules and duration are subject to change at any time.*