Interview with Alex Hughes, author of the Mindspace Investigations, and Giveaway - April 30, 2013


Please welcome Alex Hughes to The Qwillery as part of the Sharp Blog Tour. Sharp (Mindspace Investigations 2) was published on April 2, 2013.

Alex:  Thank you! I’m thrilled to be here. I was so happy to be involved in the Debut Author Challenge last year, and incredibly touched by the response. You guys will always have a very special place in my heart because of that.

TQ:  Thank you. It was wonderful having you in the Challenge!

TQ:  Please tell us something about Sharp (Mindspace Investigations 2) that is not in the book description.

Alex:  The smart beat cop in Clean who spotted one of the key clues to solve the case is back, and he’s been promoted to junior detective working under Cherabino. Michael is smart, cheerful, and well-adjusted, everything Adam is not, and Adam is insanely jealous.

TQ:   Which character has surprised you the most in the series so far?

Alex:  Paulsen, actually. She started out as a pretty one-dimensional character, but over time she’s really developed into someone I’d like to spend time with. She’s interesting and strong in a way unique to her.

TQ:   What do you wish you'd known when the 1st book came out that you know now?

Alex:  Checking the Amazon ranking numbers every hour is a bad idea. Much better to be writing on the next book :)

TQ:  Are there any other genres in which you would like to write in addition to Science Fiction?

Alex:  I love good stories of every kind, and I love suspense. Mystery of course is a possibility, and a futuristic romance-adventure or a space opera. I’ve written short stories in crime fiction and literary stuff both in and out of science fiction / fantasy. I might also be interested in doing straight urban fantasy. The world is big and there’s a lot of room in it to explore great stories. I love great stories--of any kind, to be honest. :)

TQ:  Your bio says that you are "an avid cook and foodie." If you could invite 3 people fictional or not to dinner who would they be and what would you serve?

Alex:  I would serve my famous Eggplant Parmesan with homemade crusty bread and a spinach salad with balsamic vinaigrette and apples. As to who I would invite, that’s a tough one, and the answer will probably change depending on the day you ask me. Today I’ll say Q from Star Trek: TNG, Anne McCaffrey, and the biblical Saint Paul, preferably near the end of his life when he’s in jail. I have no idea what we’d talk about -- I might have to invite each separately.

Alex:  Books Three and Four in the Mindspace Investigations series are currently scheduled to come out in 2014. I’m also playing with some ideas in other worlds with other characters, so stay tuned.

Alex:  Thank you again for having me here!


You okay? came Cherabino’s thought again, frustrated. Tap, tap, her mind against mine, tap, tap, as if she could somehow feel my distress and reacted with impatience instead of care. Tap, tap, along the long yellow line back to the real world.

I followed that line, hand over hand, inch by painful blind inch, laboriously surfacing, one overwhelming moment at a time. She kept tapping. She kept pushing. It was the only thing that got me all the way there.

I woke to the clear view of the floor and my knees, twelve inches from the bloodstain, my nose overcome with bad smells. I hadn’t thrown up. I could say that much. And—mind shaking, aching, shivering in reaction pain, I realized I was back to mind-deaf. My head rang with pain, pain—but no emotion. I was deaf and blind again.

I shook my head—and immediately thought better of it; the movement made the world spin.

My eyes caught the victim’s foot, her bare foot on the tile, and I saw a small tattoo, a circle of wavy lines, neurons, encircling a stylized S and Q. I sat down hard, on the tile. I knew that tattoo.

I knew that tattoo, and in combination with it the female mind, or who she’d once been. Her name hadn’t been Hamilton when I’d known her, but she hadn’t been married. Emily, her name had been. Even through the overwhelming pain in my head, I couldn’t let go of the thought. Emily had been one of my best advanced students, years ago. Before it all fell apart. Before her mind twisted into a knot—into something not an Abled mind anymore. Before I’d done the unthinkable.

“Are you okay?” Cherabino repeated.

I fought the guilt and the disorientation of seeing Emily again, seeing her dead. I fought the exposure sickness, the injury. I sat on them, hard, and built a barrier between us with bleeding fingers. Cherabino couldn’t know. She knew too many of my failures as it was.

One small knee shuffle at a time, I moved back, away from Emily. It wasn’t her fault she smelled of urine, dried blood, and darker things, but it wasn’t mine either.

“Well, did the husband do it?” Freeman asked.

“Are you okay?” Cherabino repeated.

I pulled myself to my feet and fished out my sunglasses over my now-light-sensitive eyes. “Unless the husband’s an ex-SEAL or something,” I said in a rasp, “somebody else did it. And now, unless there’s some kind of emergency, I’ll be in the car.”

Uncaring of reactions, I stumbled out of the devil house, away from the seat of every failure I’d ever had, down the stupid steep stairs, and climbed into the backseat of the cop car. I needed to be horizontal. Now. 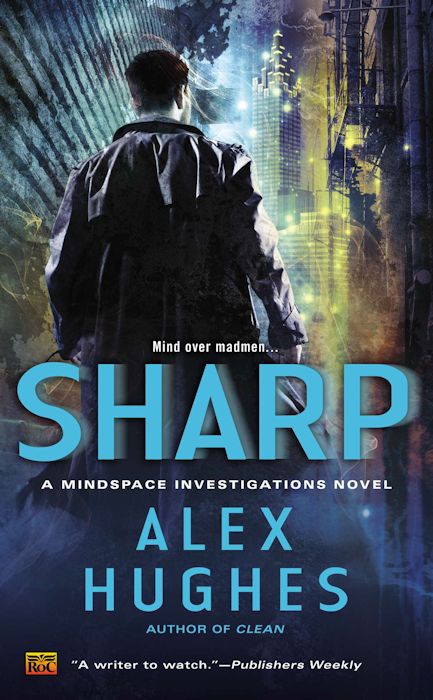 HISTORY HAS A WAY OF REPEATING ITSELF, EVEN FOR TELEPATHS.…

As a Level Eight telepath, I am the best police interrogator in the department. But I’m not a cop—I never will be—and my only friend on the force, Homicide Detective Isabella Cherabino, is avoiding me because of a telepathic link I created by accident.

And I might not even be an interrogator for much longer. Our boss says unless I pull out a miracle, I’ll be gone before Christmas. I need this job, damn it. It’s the only thing keeping me sane.

Parts for illegal Tech—the same parts used to bring the world to its knees in the Tech Wars sixty years ago—are being hijacked all over the city. Plus Cherbino's longtime nemesis, a cop killer, has resurfaced with a vengeance. If I can stay alive long enough, I just might be able to prove my worth, once and for all... 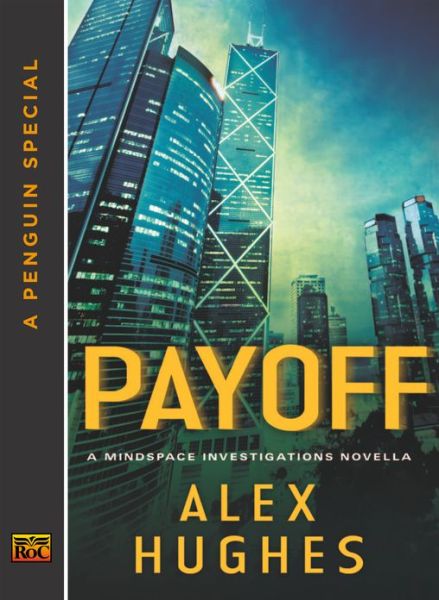 Being a telepath, I should have seen the hell I was getting myself into…

I used to be one of the most powerful telepaths in the guild. That was before my drug addiction and before they kicked me out. But I'm not a bad guy. Now I help the Atlanta PD solve murders. And even though there are only a few people I call friends, I'd do most anything to keep their trust.

So when a judge asks me to help investigate a missing college kid, I'm down for it. No questions asked. No problem. But in this dark world, things are never easy and a favor is never just a favor. Turns out, politicians don’t like being murder suspects. And it's bad to anger someone with more power than you. I thought I had nothing to lose... I was wrong. 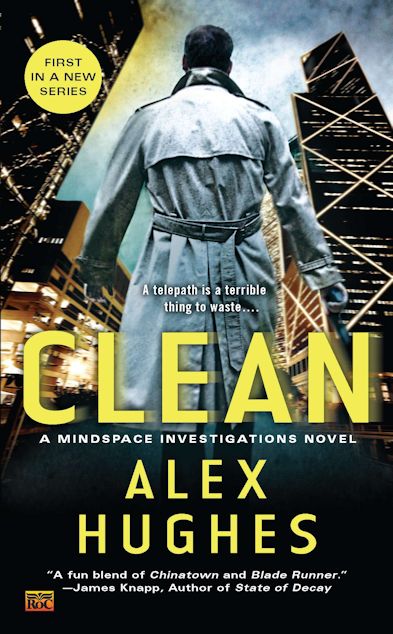 A RUTHLESS KILLER—
OUT OF SIGHT, OUT OF MIND

I used to work for the Telepath’s Guild before they kicked me out for a drug habit that wasn’t entirely my fault. Now I work for the cops, helping Homicide Detective Isabella Cherabino put killers behind bars.

My ability to get inside the twisted minds of suspects makes me the best interrogator in the department. But the normals keep me on a short leash. When the Tech Wars ripped the world apart, the Guild stepped up to save it. But they had to get scary to do it—real scary.

Now the cops don’t trust the telepaths, the Guild doesn’t trust me, a serial killer is stalking the city—and I’m aching for a fix. But I need to solve this case. Fast. I’ve just had a vision of the future: I’m the next to die.

Alex has written since early childhood, and loves great stories in any form including scifi, fantasy, and mystery. Over the years, she has lived in many neighborhoods of the sprawling metro Atlanta area, including Decatur, the neighborhood on which Clean is centered. Her work is dark, complex, action-filled and a little funny. Her Mindspace Investigations series has been called "A fun blend of Chinatown and Blade Runner" by James Knapp, and Publisher's Weekly called her "a writer to watch."

When not writing you can find Alex in the kitchen cooking gourmet Italian food, watching hours of police procedural dramas, and humming to delightfully obscure music.

Learn more about Alex and her work at www.ahugheswriter.com.

What:  One commenter will win a copy of Clean (Mindspace Investigations 1) from Alex. US ONLY

Who and When: The contest is open to all humans on the planet earth with a US mailing address. Contest ends at 11:59 PM US Eastern Time on May 10, 2013. Void where prohibited by law. No purchase necessary. You must be 18 years old or older to enter.