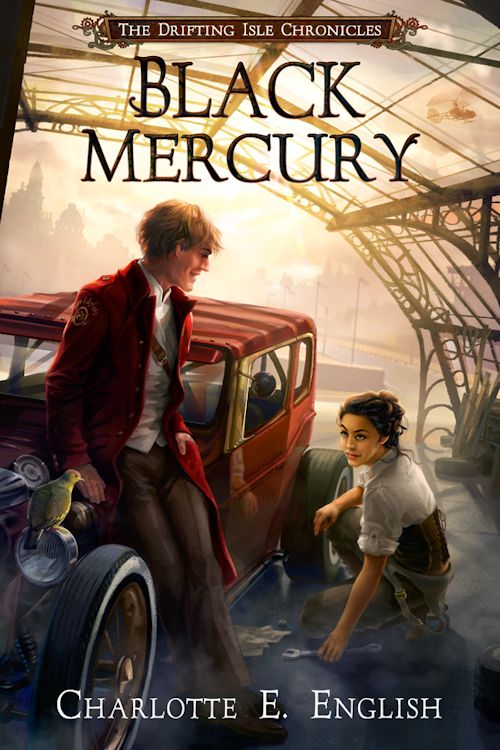 Caspar Goldstein is the star of the steam car racing scene in the city of Eisenstadt. All he cares about is winning the coveted Autocarriage Cup, and he’s in with a chance—until a crash at the track throws his plans into disarray. When a chance discovery brings a new superfuel into his life, he can’t resist the opportunity to claim some for himself.

But when black mercury powers the first ever flight to the mysterious Drifting Isle, its fame quickly spreads—and everyone wants what Caspar’s got. He’s made a grave mistake, but it’s too late to back out now. Unsure who to trust, Cas must rely on his few true friends for help; but how can inventors, autocarriage drivers and pigeons hope to face down the deadliest of assassins and thieves?


Note:   Black Mercury by Charlotte E. English is the 1st novel in the shared world of The Drifting Isle Chronicles. The 2nd novel in the Chronicles is The Kaiser Affair by Joseph Robert Lewis. The third is The Machine God by Meilin Miranda.  Further novels are to follow.

Mihir Wanchoo of Fantasy Book Critic has reviewed The Machine God and writes about the background of the Chronicles here. Melissa of My World...in words and pages has reviewed The Kaiser Affair here.

You may find more information about The Drifting Isle Chronicles at the website.

Black Mercury kicks off the shared world of The Drifting Isle Chronicles with a story of mysteries, crime, danger, and discovery (both scientific and personal).

Cas Goldstein is the catalyst for much of what happens in Black Mercury. He's the son of a very wealthy industrialist, races cars, and has to be taken care of by others. His actions lead to a great deal of trouble for his friends and put him in mortal danger.  This is very much an eye-opening experience for Cas as things go from bad to much, much worse for him.  His journey from the beginning to end of the novel is not an easy one, but I enjoyed watching his character develop and deepen.

While Cas may be the cause of much of what happens, the story is an ensemble piece with a strong supporting cast of characters - Cas' Aunt Hildy Goldstein (an inventor), Clara Koh (Cas' assistant), Lukas Rosenthal (best friend and fellow race car driver), and Til Mencken (Hildy's assistant).  They come to Cas' rescue on more than one occasion despite his best efforts to not involve them in his mistakes.  Each of these characters is well-developed and motivations for each become clear. Plus there is a talking pigeon who I adore! Yes, most of the birds in Eisenstadt talk.

The pacing of Black Mercury is good with some nail-biting moments as it comes to a satisfying conclusion.  There were a few instances where the flow of the story stuttered for me due to some continuity issues, but all in all it moved smoothly.

There are many tantalizing glimpses into bits of the shared world that have piqued my interest about about the Drifting Isle itself, the government of Eisenstadt, and other cultures/places that interact with the Eisenstadt. Of course, I'll be reading the other books in the Chronicles to find out more and delve into other aspects of this shared world.

Black Mercury is a fun read with a strong cast of characters and an intriguing story. It's a good introduction to the world of The Drifting Isle Chronicles.