Interview with Jennifer Harlow, author of What's a Witch to Do?, and Giveaway - March 5, 2013

Please welcome Jennifer Harlow to The Qwillery.  Jennifer's most recent novel is the first in her Midnight Magic Mystery series - What's a Witch to Do? 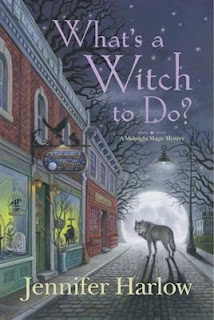 TQ:  Welcome to The Qwillery.  What would you say is your most interesting writing quirk?

Jennifer:  I can’t just sit down and write in silence. I’ve tried but the lack of noise gets to me within minutes. I always have music or the TV on. It’s not a bad thing because sometimes what I’m listening to inspires me. I even have soundtracks to the books which can be found at my website www.jenniferharlowbooks.com.

Jennifer:  Without question Janet Evanovitch, Laurell K. Hamilton, and Jennifer Crusie. I wouldn’t be half the writer I am without having been exposed to their works. From Evanovitch, I learned how to incorporate humor, mystery, and sexual tension while keeping a quick pace in the story. Hamilton showed the perfect was to combine two genres effectively, thriller and paranormal, and that a heroine doesn’t have to always be a sweet, perfect woman. She can have a hard edge and still be likable. From Jennifer Crusie, I learned the art of a romance novel without a clear formula. Her characters aren’t perfect, they meet in strange ways, and struggle with real compatibility issues. I just hope I did my heroes justice.


TQ:  Are you a plotter or a panster?

Jennifer:  Plotter and panster. I always have the main characters and plot points in my head in advance but how I get from Point A to B usually changes because of the characters or logic gaps.

Jennifer:  The action. I am not good at descriptions. Since I basically taught myself to write from screenplays, dialogue is second nature to me. Descriptions not so much. I either do too much or too little, then have to go back and fix them in the editing process. Action scenes are worse. You have to be a choreographer with descriptions. It takes forever. Show not tell is the bane of my bloody existence.


TQ:  The first Midnight Magic Mystery is What's a Witch to Do?. What inspired you to write mysteries with paranormal/supernatural elements?

Jennifer:  I don’t know where it comes from but I’ve always been drawn to horror and the paranormal. My grandmother was worried I’d go over to the “dark side” but they’ve always fascinated me. I like horror because it’s so dramatic like riding a roller coaster. You get to touch that darkness, that danger, but it can’t touch you back or hurt you. The paranormal is the unexplained, and we fear what we don’t understand. Plus with the paranormal you get to have a little magic in your life, even if it’s only in a book. Lord knows we can all use that sometimes.

Jennifer:  Most of it comes from existing lore or just the common tropes in pop culture. With the witch elements I asked my aunt, who is Wiccan, for guidance with what herbs are used for what. I do try to stay as close to the truth, or what’s accepted as truth, but can sometimes add elements for the story like a werewolf always knows its mate at first sight (or smell.) I try to hide it, but at heart I’m a hopeless romantic who believes in love at first sight. My grandparents had it. Why not let my characters?


TQ:  What sorts of research have you done for What's a Witch to Do? What is the oddest bit of information that you’ve come across in your research?

Oddly I didn’t have to do much witch research for this book when I was writing it. When I was younger I was myself a witch for about a week after I saw The Craft. None of my spells worked so I gave up. Then in college I took “The History of Witchcraft” so I knew about “witchs” through the ages and even Wicca. One of the few times my education proved useful in real life.


TQ:  Tell us something about What's a Witch to Do? that is not in the book description.

Jennifer:  There’s a sex scene! My first ever sex scene. I wrote it at the library so I felt doubly guilty and dirty which I hope translates to the page. It was fun.


TQ:  In What's a Witch to Do? who was the easiest character to write and why? The hardest and why?

Jennifer:  Out of all my characters I think Mona is the most like me. She takes on other people’s troubles and a mountain of responsibility and leaves no room for her own. I’ve gotten better about carrying other people’s crosses as well as my own but it took a lot. I’m a people pleaser to a fault. So she was easy to write, but the children in the book were harder. It took many edits to make them children and not little adults. I got them there though.


TQ:  Without giving anything away, what is/are your favorite scene(s) in What's a Witch to Do?

Jennifer:  I love the scene where the romantic lead, and I’m not saying who as she has two potential suitors, confesses his love for her. Her reaction is less than enthusiastic and downright shocking but so true to real life and the characters. I’m very proud of it.

Jennifer:  This year is very, very busy for me. Besides What’s A Witch To Do? I have a short story featuring F.R.E.A.K. teleporter Nancy, the third F.R.E.A.K.S. Squad book Death Takes A Holiday out in August, and may self publish something else. I’m exhausted just thinking about it all.

About What's a Witch to Do? 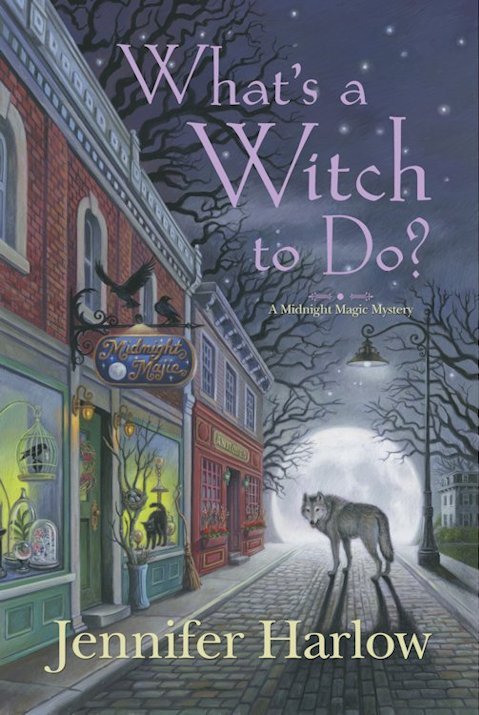 With her to-do lists growing longer each day, the last thing Mona McGregor—High Priestess and owner of the Midnight Magic shop in Goodnight, Virginia—needs is a bleeding werewolf at her front door. Between raising her two nieces and leading a large coven of witches, Mona barely has time for anything else. Not even Guy, the handsome doctor who’s taken an interest in her.

But now there’s Adam Blue, the sexy beta werewolf of the Eastern Pack who’s been badly hurt, warning Mona that someone wants her dead. Hell’s bells! A demon is stalking her, and Mona starts to suspect her coven members and even her own family could be responsible for it. With two attractive men and a determined demon after her, Mona teams up with Adam to find out who really wants her dead . . . and who really wants her.

About the F.R.E.A.K.S. Squad Investigations 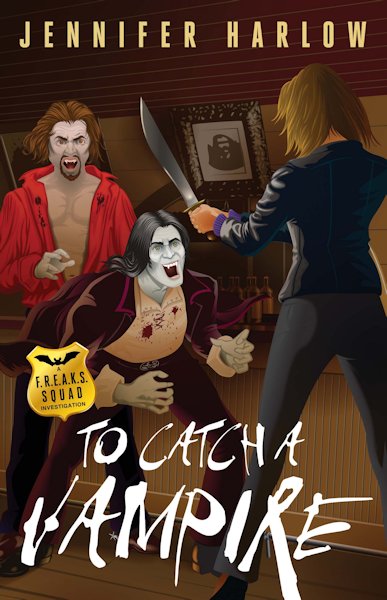 Beatrice Alexander, telekinetic special agent, is still adjusting to life among the F.R.E.A.K.S. while wiping out zombies and other supernatural threats. When Bea learns about her “special assignment” investigating a series of human disappearances with Oliver Montrose, her gorgeous but annoying vampire co-worker, she reluctantly agrees to go undercover. Disguised as a married couple, they infiltrate the gothic vamp scene in Dallas. While sniffing out clues, Oliver’s convincing public—and not so public—displays of affection have Bea swooning in her bustier and fishnets. Between contending with her fake husband’s ex-lover Marianna and feeling guilty for hiding the mission from her werewolf crush Will, Bea discovers she’s not the only F.R.E.A.K. keeping secrets. Clubbing with the undead turns bloody when Oliver’s old enemy, the Lord of Dallas, decides to seek his revenge. Caught in the crossfire, Bea is up to her neck in blood-sucking trouble. 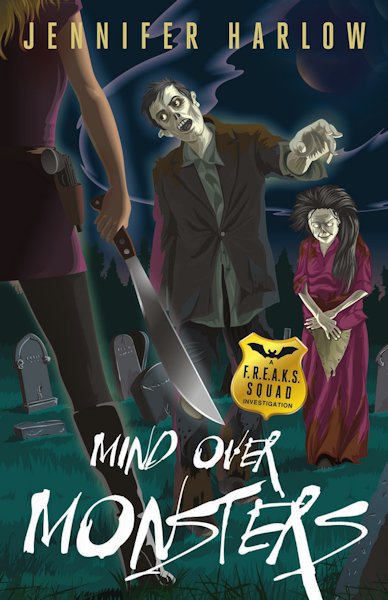 Beatrice Alexander is no ordinary schoolteacher—she can move objects with her mind, an embarrassing skill she hasn’t yet mastered or embraced. After nearly killing her brother by accident, she joins the F.R.E.A.K.S. Squad, the Federal Response to Extra-Sensory and Kindred Supernaturals. This top-secret branch of the FBI combats ghosts, ghouls, and other monsters threatening humanity.

With her teammates—among them a handsome former-detective werewolf and an annoying Don Juan vampire who’s dead-set on seducing her—Beatrice investigates her first case. Disgustingly dismembered bodies have turned up, bearing bite marks of the undead. Someone—or something—is raising a horde of hideous, bloodthirsty zombies. Armed with Bette, her trusty machete, Beatrice takes on the master of the flesh-devouring corpses, who’s guarding a horrifying secret . . .

Jennifer Harlow spent her restless childhood fighting with her three brothers and scaring the heck out of herself with horror movies and books. She grew up to earn a degree at the University of Virginia which she put to use as a radio DJ, crisis hotline volunteer, bookseller, lab assistant, wedding coordinator, and government investigator. Currently she calls Northern Virginia home but that restless itch is ever present. In her free time, she continues to scare the beejepers out of herself watching scary movies and opening her credit card bills.