Interview with Chuck Wendig and Giveaway - May 1, 2012

I can't think of a better way to start May than with a 2012 Debut Author Challenge Interview with Chuck Wendig. Blackbirds (Miriam Black 1) was published on April 24 in the US/Canada and will be published on  May 3 in the UK/RoW.  You may read Chuck's Guest Blog - Having a kid changes everything. - here.

Chuck:  I twist the head off an albino crow every day before writing.

I’d call that pretty “quirky.” Also possibly illegal? I don’t know, but screw it, one must entreat the gods.

I actually don’t have many quirks, but font is one of them. Every project seems to ask for its own font. And I really need to find that font – I mean, I don’t need to, if I’m forced to write in, say, Courier New or Wingdings, I can. But I really like to hunt the right font down and pin it to the story with an arrow.

Chuck:  Early on, I was absorbed and inspired by the works of Robert McCammon, Joe Lansdale, Christopher Moore, Bradley Denton, Robin Hobb. These days I’m inspired by peers who are doing incredible work, too: Stephen Blackmoore, Saladin Ahmed, Christa Faust, Duane Swierczynski, the list goes on and on.

I should note that Blackbirds in particular follows a style set forth by the wildly underrated master-of-the-macabre, Charles Grant.

Chuck:  Pantser by heart, plotter by necessity. I hate to plot and outline and plan and scheme but if I don’t, my story wanders aimlessly about like an old person lost at the mall.

Chuck:  Patience. Writing takes patience. You need it to plan it. To write it. To publish it either through traditional or DIY channels. To build audience. To let the book find its own audience.

I have all the patience of an espresso-jacked field mouse.

Chuck:  Miriam Black knows how you’re going to die, but can she stay the Grim Reaper's hand? Can she save Louis, or will she only doom him further?

TQ:  What inspired you to write Blackbirds?

Chuck:  Death and the powerlessness it brings. Death is one of the few common threads that binds us all together, and it makes us all its bitch. I went through a time when I was made to realize that, and from that frustration and anxiety came Miriam, a character who embodies—in a supernatural sense, even—the reality of our deaths and the seeming inability to do anything about it.

TQ:  What sort of research did you do for Blackbirds?

Chuck:  I went out on the road for a year, learned to chain-smoke, and I stole stuff from dead people just to see what it would feel like. I figured I’d really embrace the “write what you know” adage!

The research was fairly light. The locations in the book were all locations I’ve been to in some fashion or another, so the big thing was researching the nature of death—the book portrays a number of death visions as Miriam sees them.

Chuck:  Miriam is probably the easiest, as she and I share certain psychic territory. I’m not her and she’s not me but I get her. I maybe wish I didn’t get her, but I do. When I started writing the next in the series, Mockingbird, I found her voice came back to me easy, almost too easy, scary-easy.

Louis may have been the hardest. The book is about terrible people, many of them made that way by other terrible people, and whether they can fix their own busted-ass moral compasses, but Louis is the one character in the book whose compass is pretty well intact. And that’s actually harder to write because you want to keep him real, keep him engaging and complex even in his simplicity.

TQ:  Without giving anything away, what is/are your favorite scene(s) in Blackbirds?

Chuck:  One of the killers in the book is a brutal little fire-plug of a woman named Harriet Adams. And she’s on the trail of Miriam and her partner(s)-in-crime.

Well, throughout the book I do these “interludes,” which serve as interstitial look-backs in order to illuminate character and plot, and sometimes these are written in the voices of certain characters.

Harriet gets one of those.

And, in typical Harriet fashion, it’s like… a sentence long. And it’s a truly horrifying sentence. It’s one of my favorite moments of the book.

Chuck:  Mockingbird drops out of the sky in late-August already, so that’s cool.

Dinocalypse Now is available to Kickstarter backers, but will be out for a wider audience in a couple-few weeks.

Plus I’ve got other tricksy little secrets up my sleeve. 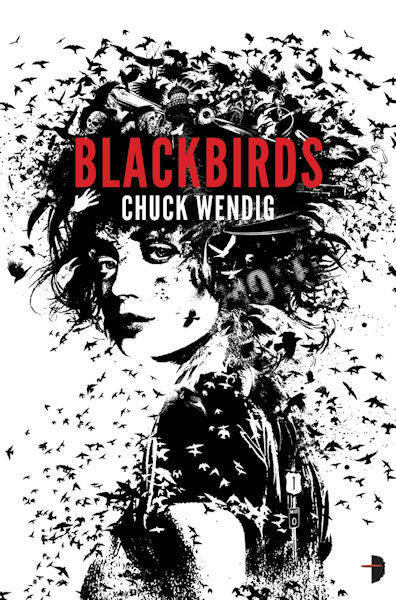 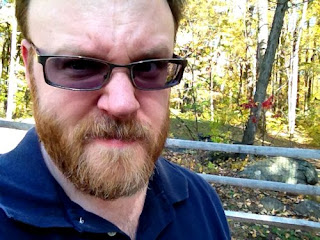 Chuck’s novel Double Dead hit shelves in November, 2011. His second novel, Blackbirds, is already getting rave reviews prior to its publication in April of this year. Its sequel, Mockingbird, publishes at the end of 2012.

He, along with writing partner Lance Weiler, is an alum of the Sundance Film Festival Screenwriter’s Lab (2010). Their short film, Pandemic, showed at the Sundance Film Festival 2011, and their feature film HiM is in development with producers Ted Hope and Anne Carey. Together they co-wrote the digital transmedia drama Collapsus, which was nominated for an International Digital Emmy and a Games 4 Change award.

Chuck has contributed over two million words to the game industry, and was the developer of the popular Hunter: The Vigil game line (White Wolf Game Studios / CCP). He is a frequent contributor to The Escapist, writing about games and pop culture.

He currently lives in Pennsylvania with wife, dog, and newborn son. You can find him at his website, terribleminds.com, where he is busy talking about storytelling and the art and craft of writing. You can find his writing advice collected in e-books such as Confessions of a Freelance Penmonkey and 500 Ways to be a Better Writer. Give him a wide berth, as he might be drunk and untrustworthy.

What:  One commenter will win a Mass Market Paperback copy of Blackbirds (Miriam Black 1) from The Qwillery. Please note that should you win the novel will not be sent to you until after it is published in April.


What book are you reading?
or
What is the last book you've finished reading?
Please remember - if you don't answer the question your entry will not be counted.

Who and When:  The contest is open to all humans on the planet earth with a mailing address. Contest ends at 11:59pm US Eastern Time on Tuesday, May 8, 2012. Void where prohibited by law. No purchase necessary. You must be 18 years old or older to enter.