Please welcome Addison Fox to The Qwillery. Warrior Enchanted, the fourth novel in The Sons of the Zodiac series, was published on May 1, 2012.


Addison:  First of all, thanks so much for having me today!

TQ:  Welcome! What would you say is your most interesting writing quirk?

Addison:   I don’t know that I have a lot of writing quirks, per se, but I love having a hot beverage next to me. No matter how hot it is outside, I just like a mug of something warm when I’m writing.

Addison:   I definitely fall more into the pantser camp, but the one thing that has changed over the years is that I do need to submit a synopsis of the entire story to my publisher before writing the book. So I do now work off of a very loose outline for the story as I’m writing.

TQ:  What inspired you to write The Sons of the Zodiac series?

Addison:   The Sons of the Zodiac were one of those magical gifts from the subconscious. I remember this so clearly – I was sitting there one night watching TV and just relaxing, not even thinking about plotting, writing or books. Out of the blue, these two ideas came into my head at the same time – astrology and mythology. I didn’t even let whatever I was watching finish – I headed for the computer immediately and started looking online, jotting down notes, etc.

TQ:  What sort of research do you do for novels?

Addison:   The great thing about writing paranormal is that you have a lot of freedom to make stuff up. I do spend a lot of time looking at astrology books and Greek mythology stories to see where I can find intersection points to help create my characters’ back story and/or reasons for why they are in their current predicament!

I have been more formal in my research for my contemporary series, Alaskan Nights. While the books take place in my fictional town of Indigo, Alaska, it’s been really important to me to get the setting right and portray a very vibrant, thoughtful small town setting.

TQ:  Which character from The Sons of the Zodiac series has surprised you the most?

Addison:   All the characters have surprised me from time to time, but Callie is an always-intriguing character for me. She’s the warriors’ housekeeper/den mother/butt kicker and she’s got a deep, dark back story that has slowly made itself known to me.

TQ:  Describe Warrior Enchanted (The Sons of the Zodiac 4) in 140 characters or less.

Addison:   Our smitten Pisces Warrior struggles to win over the white witch next door while saving the world. And her family.

TQ:  Tell us something about Warrior Enchanted that is not in the book description.

Addison:   One of the things I really loved about writing this book is the exploration of family. In the case of the warriors, we have a family by circumstance. Their bonds are deep, but they argue with each other and have to learn to live with each others’ decisions. In Emerson, the heroine, we also see a family struggle, but one based on actual blood bonds. For me, that was one of the interesting areas to mine in the writing of the story – how our actions are our own, yet still affect those we love.

TQ:  Without giving anything away, what is/are your favorite scene(s) in Warrior Enchanted?

Addison:    There are a few scenes about 2/3 of the way through the book where Drake and Emerson spend some time alone in upstate New York (some very sexy time!) and then spend time at her sister’s house. I had a lot of fun with those scenes. Whether it was an actual sex scene or the scene with Emerson’s family, there was an intimacy to the characters at that point in the story that I had a lot of fun with and really enjoyed bringing to life on the page.

TQ:  You write The Sons of the Zodiac series (Paranormal Romance) and the Alaskan Nights series (Contemporary Romance). Are there any additional genre or sub-genres in which you'd like to write?

Addison:   I’m having a lot of fun with both of these series and recently contracted with Entangled to write category-length contemporary romance for their Indulgence line. I’m really excited to be working with them and look forward to working on those books as well.

Addison:   Next up is the second book in my Alaskan Nights series, COME FLY WITH ME. That takes place shortly after BABY IT’S COLD OUTSIDE ends and features our second New Yorker heroine, Grier Thompson, who is up in Indigo dealing with her late father’s will. She’s got a steamy romance going on with Mick O’Shaughnessy, the town’s pilot. Mick’s had an attraction to Grier since she came to town and he’s bound and determined to ensure she has a good reason or two to stay.

Addison:   Thanks so much for having me! I’d love to share Drake and Emerson’s story, so one lucky commenter will win a copy of WARRIOR ENCHANTED. (TQ:  see THE GIVEAWAY below.)

About The Sons of the Zodiac


Warrior Enchanted
The Sons of the Zodiac 4
Signet, May 1, 2012
Mass Market Paperback and eBook, 384 pages 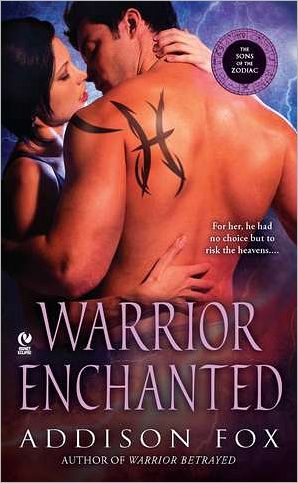 Pisces warrior Drake Campbell and his zodiac brethren have driven themselves to the edge. He’d love to take comfort in the arms of the woman he cares for, if only she would lift her emotional barriers to him.

White witch Emerson Carano has more to worry about than the Pisces warrior. Their affair may be red-hot, but she keeps the sexy man at arm’s length to avoid getting hurt. When her estranged brother, Magnus, suddenly reappears—wielding a dangerous dark magic—Emerson has no choice but to ask Drake and his brothers for help.

Long-buried secrets and dangerous alliances will threaten the very foundation of the warriors while striking at the heart of Emerson’s carefully constructed world. Can she put aside her fears to join forces with the only man who can help her—even if her own family must pay a terrible price?

Wave of Memories
The Sons of the Zodiac
Signet, April 3, 2012
eNovella 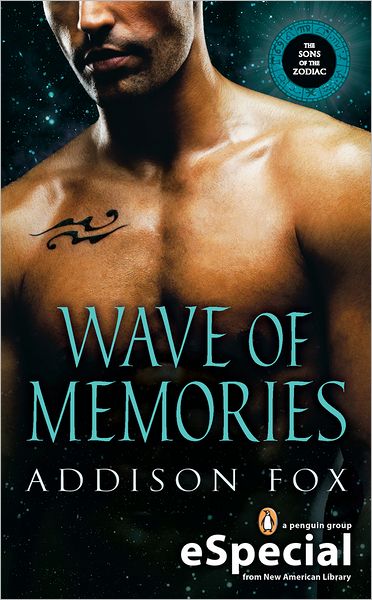 After a cruel twist of fate, Aquarius warrior Aiden Cage relinquished his one true love and vowed to become the most fearsome warrior in all the Pantheon. Meg, the goddess of retribution, never fully understood the reasons why she was betrayed by Aiden millennia ago—nor did she ever forgive him. Yet now he is the only one she can turn to for help. The enemy that separated them is back, and he has sworn to destroy them both…for all time.

Warrior Betrayed
The Sons of the Zodiac 3
Signet, May 3, 2011
Mass Market Paperback and eBook, 384 pages 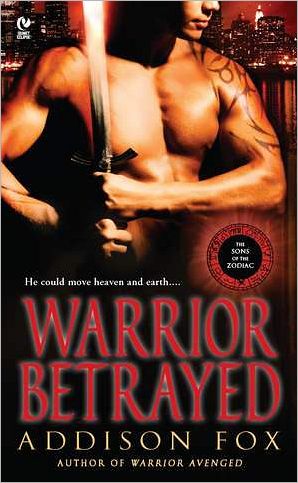 As Montana Grant struggles to lead her late father's company, her estranged mother suddenly reappears, spouting nonsense about Mount Olympus, immortal warriors, and curses. But after an event that puts the company's future-and Montana's life-at risk, she decides to take her mother's last but of advice.

Quinn Tanner is Montana's security specialist-and a Taurus Warrior. With worldwide peace hanging in the balance, it's up to Quinn to help Montana rise to her destiny-even as they're falling in love. 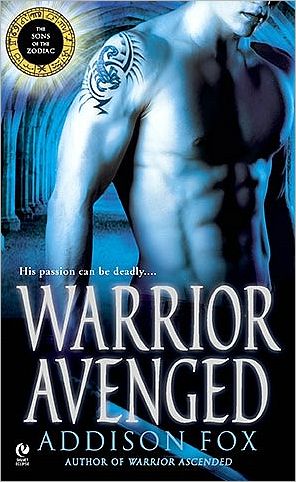 Millennia ago, the goddess of justice created a race of fierce warriors-each imbued with a special power of the zodiac-charged with protecting humanity from the darkest evils...

Immortal warrior Kane Montague is as lethal as the Scorpion that makes his powerful form. As an assassin for MI-6, he's an ace gun-for-hire. After being double-crossed on a mission, Kane knows all too well who's to blame: a sexy, secretive agent named Ilsa who may be even deadlier than he is... 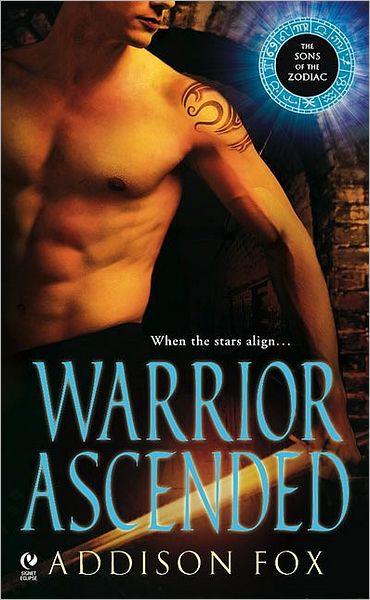 Charming, proud, and impulsive, Leo Warrior Brody Talbot is fighting what may be his final battle. Enyo, the Goddess of War, plans to fulfill an ancient prophecy to destroy humanity by harnessing the dark power of the Summoning Stones of Egypt. There's only one person who knows enough about the stones to help Brody stop her-beautiful museum curator Ava Harrison.

Never in all his centuries has Brody met a woman who enthralls him like Ava. But, bound to protect her, he struggles to deny his passion as they are drawn into a dark and dangerous final reckoning between good and evil. 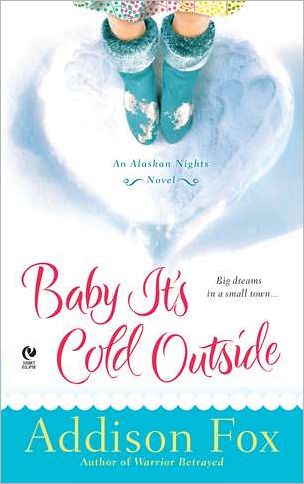 After a frantic call, Sloan McKinley travels to the heart of the Alaskan wilderness to be there for her best friend, who's just inherited property in the small town of Indigo. The last thing she expects is to be lured by the town's matriarchs into their annual contest to get their grandsons married off.

But Sloan can't deny the appeal of the rugged local men-Walker Montgomery in particular. Soon she finds herself falling in love with the wild outdoors...and with one of Indigo's most beloved residents. There's just one question that remains: is the town's most confirmed bachelor ready to get caught?

Come Fly With Me (Alaskan Nights 2) will be published in November 2012. 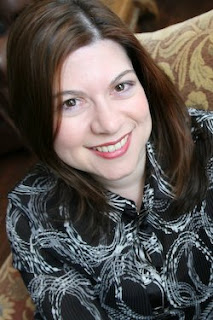 Addison Fox can’t remember a time when words weren’t part of her life. An avid reader, her love of the written word started at the tender age of one with The Owl and the Pussycat by Edward Lear (a poem she could recite by heart to any family member who would listen.) Dr. Seuss, C.S. Lewis, Judy Blume and a host of others quickly followed until she discovered THE CLAN OF THE CAVE BEAR by Jean M. Auel while writing a paper at the library in the seventh grade. Although not a classic romance, Ayla and Jondalar’s love story moved her firmly into the romance section and she hasn’t looked back!

Addison lives in Dallas. She loves to get email from readers and you can find her on Facebook and Twitter regularly as well as at her home on the web, www.addisonfox.com.

What:  One commenter will win a copy of Warrior Enchanted (The Sons of the Zodiac 4) from Addison!


What are your favorite sub-genres of Romance
(Paranormal, SciFi, Contemporary, etc)?
Please remember - if you don't answer the question your entry will not be counted.

There are a total of 2 entries you may receive: Comment (1 entry), and Facebook and/or Twitter mention (+ 1 entry). This is subject to change again in the future for future giveaways.

Who and When:  The contest is open to all humans on the planet earth with a mailing address. Contest ends at 11:59pm US Eastern Time on Sunday, June 3, 2012. Void where prohibited by law. No purchase necessary. You must be 18 years old or older to enter.