Please welcome Rebecca Zanetti to The Qwillery as part as part of our 2011 Debut Author Challenge interviews.

TQ: What would you say is your most interesting writing quirk?

Rebecca:  Well, okay. It’s odd, but I can’t write without wearing socks. My feet are usually cold. Even in the summer when I’m wearing shorts and a tank. The thing is…I don’t care if they match. So I’ve opened the door to the UPS guy wearing shorts and one fuzzy red sock, and one blue sock with green stripes. He thinks I’m weird.

Rebecca:  I like Nora Roberts, Cynthia Eden, Lora Leigh, Sayde Grace, J.R. Ward and of course, J.D. Salinger. The first romance I ever read was one of Nora Robert’s MacGregor books and I was hooked for life.

Rebecca:  I’m a panster. In fact, I write my first draft and then go back and really get to know my characters to layer the details throughout the book. I’ve tried to fill out those character worksheets before starting a new book, but by the time I get to the third question, I have a scene in my head I just need to write. Then I never quite make it back to the worksheet. At least, until the first draft is finished.

TQ:  What inspired you to write Fated?

Rebecca:  This story wouldn’t leave me alone. I’d heard on the writing loops that editors were NOT looking for any vampire books. But this one kept bugging me, so I wrote it for myself, just for fun. It sold in five days from my sending out the first query.

TQ: What sort of research did you do for Fated?

Rebecca:  Actually, I wrote the vampire world the way I want the vampire world to be. My vamps are tough and only take blood in extreme situations like battle…or sex. But I did brush up on string theory and quantum physics to explain some of their abilities.

TQ: Without giving anything away, what is/are your favorite scene(s) in the book?

Rebecca:  The hero in FATED is a complete alpha male without question. Soldier, vampire and leader. So when he lets his guard down and shows an unexpected sweet side, I think it really works. I love that kind of situation. And then, of course, he goes off to fight the bad guys with no mercy.

Rebecca:  Right now I have nine books I’d like to write that would complete the overall story arc. I’m not sure about novellas…that depends on my publisher. I’d love to write one or two with secondary characters.

Rebecca:  Book two in the Dark Protector series is called CLAIMED and will be released in October. It features the king of the vampire world and a feisty scientist. Book three is HUNTED and I’m finishing it right now—I think the release date is summer of 2012.

Rebecca:  Thanks for having me! These questions were a lot of fun. J 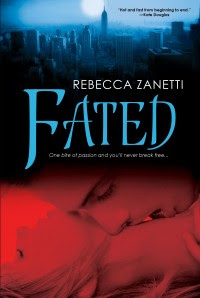 Rebecca Zanetti has worked as an art curator, Senate aide, lawyer, college professor and a hearing examiner - only to culminate it all in stories about vampires and science. She is a member of RWA and several of its chapters and has won awards for her works throughout the industry.  She currently writes the Dark Protector series from Kensington Publishing and is represented by Caitlin Blasdell at Liza Dawson Associates.

What:  One commenter will win a signed copy of Fated directly from Rebecca!

How:  Leave a comment telling The Qwillery the name of your alpha vampire? Please remember - if you don't answer the question your entry will not be counted.

Who and When:  The contest is open to all humans on the planet earth with a mailing address. Contest ends at 11:59pm US Eastern Time on Wednesday, March 2, 2011. Void where prohibited by law.