Please welcome author Ben Aaronovitch to The Qwillery for the first in our 2011 Debut Author Challenge interviews.

Ben:  I wouldn't know about interesting but somewhat, shall we say, autistic about counting the words I write. I have an EXCELL spreadsheet on which I not only do a daily log (with a progress graph) but gives a percentage of each chapter completed, average writing speed (total) average writing speed (last 7 days) and estimated completion date based on both averages plus it constantly updates the minimum daily word count required for me to complete on time. Like I said, just a tad obsessive.

Ben:  I go with whatever is working at the time and give thanks when I reach my word target by the end of the day. It's always good to have at least a scaffold when you're writing but you mustn't mistake the scaffold for the final building. Also if you're writing anything with a mystery component than you must keep track of where your stories gone so far.

TQ:  What inspired you to write Midnight Riot / Rivers of London?

Ben:  I find ideas sort of sneak up on you. One minute I was happily ignorant of Peter Grant's existence and then - bang - he's taking over my life.

TQ:  What sort of research did you do for Midnight Riot / Rivers of  London?

Ben:  There are two directions for research. The first involves spotting something interesting in your travels, or reading or whatever and filing it away for future use. The second is more directed - for that I usually start with an internet sweep to establish what's available online and how reliable it is, if it's a location I try and visit the place, if it's an organisation I look for sources (official or otherwise), I buy books for preference, so I write in them, but if that's impracticable I have reading privileges at the British Library and the London Metropolitan Archive. Museums are also very useful since they also serve as research facilities, the London Museum particularly useful for me of course.

TQ:  How many books are planned for the Rivers of London series?

Ben:  I intend to write these books until I run out of ideas or they tell me to stop - whichever comes first.

Ben:  Cool jazz in Soho. A faceless man. Some old style London gangsters. Women who love music too much. Some history. Rooftop chases by moonlight.

Ben:  Very nice of you to have me. 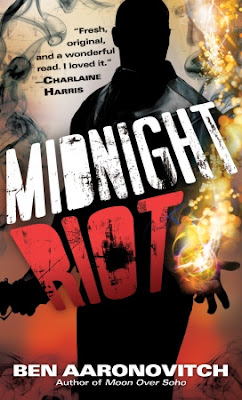 Probationary Constable Peter Grant dreams of being a detective in London’s Metropolitan Police. Too bad his superior plans to assign him to the Case Progression Unit, where the biggest threat he’ll face is a paper cut. But Peter’s prospects change in the aftermath of a puzzling murder, when he gains exclusive information from an eyewitness who happens to be a ghost. Peter’s ability to speak with the lingering dead brings him to the attention of Detective Chief Inspector Thomas Nightingale, who investigates crimes involving magic and other manifestations of the uncanny. Now, as a wave of brutal and bizarre murders engulfs the city, Peter is plunged into a world where gods and goddesses mingle with mortals and a long-dead evil is making a comeback on a rising tide of magic.

You can read my review of Midnight Riot / Rivers of London here. 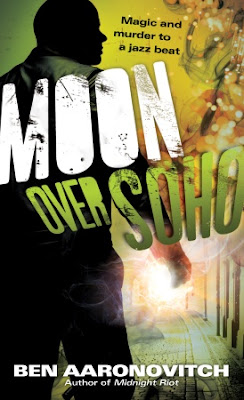 The song. That’s what London constable and sorcerer’s apprentice Peter Grant first notices when he examines the corpse of Cyrus Wilkins, part-time jazz drummer and full-time accountant, who dropped dead of a heart attack while playing a gig at Soho’s 606 Club. The notes of the old jazz standard are rising from the body—a sure sign that something about the man’s death was not at all natural but instead supernatural.

Body and soul—they’re also what Peter will risk as he investigates a pattern of similar deaths in and around Soho. With the help of his superior officer, Detective Chief Inspector Thomas Nightingale, the last registered wizard in England, and the assistance of beautiful jazz aficionado Simone Fitzwilliam, Peter will uncover a deadly magical menace—one that leads right to his own doorstep and to the squandered promise of a young jazz musician: a talented trumpet player named Richard “Lord” Grant—otherwise known as Peter’s dear old dad. 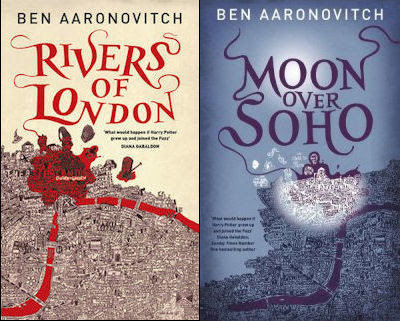 Ben Aaronovitch was born in 1964. He had parents, some brothers, some sisters and a dog named after a Russian cosmonaut. He also had the kind of dull childhood that drives a person to drink, radical politics or science fiction.

Discovering in his early twenties that he had precisely one talent, he took up screenwriting at which he was an overnight success. He wrote for Doctor Who, Casualty and the world's cheapest ever SF soap opera Jupiter Moon. He then wrote for Virgin's New Adventures until they pulped all his books.

Then Ben entered a dark time illuminated only by an episode of Dark Knight, a book for Big Finish and the highly acclaimed but not-very-well-paying Blake's 7 Audio dramas. Trapped in a cycle of disappointment and despair Ben was eventually forced to support his expensive book habit by working for Waterstones as a bookseller.

Ironically it was while shelving the works of others that Ben finally saw the light. He would write his own books, he would let prose into his heart and rejoice in the word. Henceforth, subsisting on nothing more than instant coffee and Japanese takeaway, Ben embarked on the epic personal journey that was to lead to Rivers of London (or Midnight Riot as it is known in the Americas).

At some point during the above, the most important thing in his life happened and he became a father to a son, Karifa, whom he affectionately refers to as 'The Evil Monster Boy'. The Evil Monster Boy will be reaching university age soon, so all donations will be gratefully received.

Ben Aaronovitch currently resides in London and says that he will leave when they pry his city from his cold dead fingers.

What:  One commenter will win a Mass Market Paperback of Midnight Riot.

How:  Leave a comment telling The Qwillery whether you like the US Covers or UK Covers better? Please remember - if you don't answer the question your entry will not be counted.

Who & When: The contest is open to all humans on the planet earth with a mailing address. Contest ends at 11:59pm US Eastern Time on Wednesday, February 9, 2011. Void where prohibited by law.


*Giveaway rules are subject to change.*
Posted by Qwill at 10:23 AM