Please welcome Darynda Jones to The Qwillery for the second in our 2011 Debut Author Challenge interviews.

Darynda: Thank you so much for having me at The Qwillery today!

Darynda:  Probably my absolutely-must-have “skeleton key”. Or, well, I call it a skeleton key. It’s an outline that answers four basic questions: Where are we? What time of day is it? What major event happens in this scene or series of scenes? And in what order does the story unfold? It is like a road map and I am utterly lost without it.

Darynda:  So very many people. I love everything from Stephen King to Julia Quinn. And they were both huge influences, giving me permission to bend the rules a little, to have fun. I’d also have to say Janet Evanovich and Mary Janice Davidson. I’ve always wanted to be able to write like Stephen Hunter. He wrote the book that the movie Shooter with Mark Wahlberg was based on called Point of Impact. His writing is amazing. His heroes are to die for.

OH! And I can’t forget Terry Pratchett. Of all the people I’ve ever read, he is the one who taught me to not only bend the rules, but break them and grind them into dust, just do it with exquisite style and breathtaking prose. (I haven’t actually reached that pinnacle of existence yet, but I’m working on it.)

Darynda:  I plot like there’s no tomorrow, baby. I barely start a book without three distinct outlines.


1. The Skeleton Key that I spoke of earlier.
2. The Outline: This is a brief synopsis of the entire book. It is usually about 5-9 pages long and is what I send my editor for approval before actually starting the book.
3. The Detailed Outline: This is where I take the skeleton key, plug the outline into the appropriate areas, then add any details I’ve come up with including specific scenes, little extras I want to reveal here and there, funny lines or situations I want to use, and even internal and external motivation. These outlines usually run between 40 and 60 pages, but remember that part about adding scenes? Yeah, by this point I’ve already written a nice chunk of the book.

Next, I take the final detailed outline, copy and paste it into my manuscript, and delete as I go. This way I never stray far from the conceived story. I don’t wander around aimlessly, wondering where I’m going. I know exactly what is coming next, and very often, if it’s a “hard” scene (meaning I’m too lazy to write it at that moment), I’ll jump to another scene. I don’t get bored and/or stuck very often and I rarely pull my hair out by its roots. I’ve tried pantsing it. It wasn’t pretty. I had writer’s block by the time I got to page three.


NOTE: Let me just say that I write ALL over the place. I do not write linearly in any way, shape or form. By having such a detailed map of where I’m going, I can write on chapter two one day and chapter nineteen the next. Another (possibly more important) advantage to this technique is that there’s never a dull moment. Each scene has a purpose. Each scene moves the story forward. This makes the book tight, the pacing strong, and the story smooth. Just sayin’.

TQ:  What inspired you to write First Grave on the Right ?

Darynda:  Mostly desperation. As an aspiring writer trying to catch New York’s eye, I wanted something different, something that would grab an agent’s and editor’s attention. Thankfully, Charley did just that.

TQ:  What sort of research did you do for First Grave on the Right?

Darynda:  I did quite a bit of research on law enforcement procedures and went to a couple of workshops. One was a chapter meeting in which the State Medical Examiner spoke. That was an eye-opener and a half. I learned so much about policy and procedure, like who can and cannot step onto a crime scene before the medical examiner is finished, and I got to see a real autopsy. I’ve never been the same. I also read books on police procedure and private investigations as well as keep a couple of friends in law enforcement on speed dial. Oh, and I watched a few episodes of Magnum, PI. That was hard. ;)

Darynda:  In one scene, My heroine Charley is basically undercover, trying to get a bad guy to confess. I love this scene because her inner thoughts just ramble and are so at odds with what is going on around her and the extreme danger she is in. While she is trying to play the damsel in distress, she is thinking about what a jerk the guy is and how he’s clearly overcompensating with the expensive suits and manicure, etc. It’s just fun and the tables are turned on her so quickly and tragically. But still her thoughts run amok.

TQ:  How many books are planned for the Charley Davidson series? Will there be any short stories or novellas set in Charley's world?
Darynda:  Interesting you should ask. I actually just completed a short story for a new romance/women’s fiction website St. Martin’s Press is going to launch soon. I was thrilled to be invited on its maiden voyage and can’t wait to see it go live. (The site, not necessarily my story.)

And as for how many books, right now the sky’s the limit. While I’m currently contracted for three and have just finished the final round of revisions for Third Grave Dead Ahead, the third installment in Charley’ story, we are looking more long-term with the project and hoping for this to be a long-lasting and well-loved series.

Darynda:  Well, since I just finished up Third Grave, we are turning our efforts to the first in a YA series I also sold to St. Martin’s Press, the first of which is titled Grimsight. It’s about a how one teenaged girl’s life is irrevocably changed when the grim reaper starts high school in her home town. I’m really excited because it’s such a fun story. And, yes, it’s also about a grim reaper, just in a very different way.

Darynda:  Thank YOU!!! I’m so excited to be here and appreciate the opportunity so much. 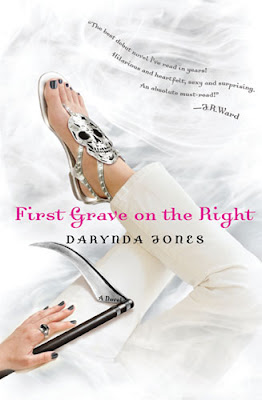 Charley sees dead people. That’s right, she sees dead people. And it’s her job to convince them to “go into the light.” But when these very dead people have died under less than ideal circumstances (i.e. murder), sometimes they want Charley to bring the bad guys to justice. Complicating matters are the intensely hot dreams she’s been having about an Entity who has been following her all her life...and it turns out he might not be dead after all. In fact, he might be something else entirely.

This is a thrilling debut novel from an exciting newcomer to the world of paranormal romantic suspense.


Second Grave on the Right (Charley Davidson 2) will be released in August 2011. 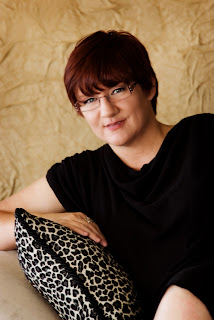 Winner of the 2009 Golden Heart® for Best Paranormal Romance for her manuscript FIRST GRAVE ON THE RIGHT, Darynda was born spinning tales of dashing damsels and heroes in distress for any unfortunate soul who happened by, annoying man and beast alike. After the Golden Heart final, she pimped herself as best she could, landed an amazing agent and sold to St. Martin’s Press in a three-book deal. Darynda lives in the Land of Enchantment, also known as New Mexico, with her husband of more than 25 years and two beautiful sons, aka the Mighty, Mighty Jones Boys. She can be found at http://www.daryndajones.com/.

What:  One commenter will win a hardcover copy of First Grave on the Right.

How:  Leave a comment telling The Qwillery black, white or gray? Please remember - if you don't answer the question your entry will not be counted.

Who & When: The contest is open to all humans on the planet earth with a mailing address. Contest ends at 11:59pm US Eastern Time on Tuesday, February 15, 2011. Void where prohibited by law.