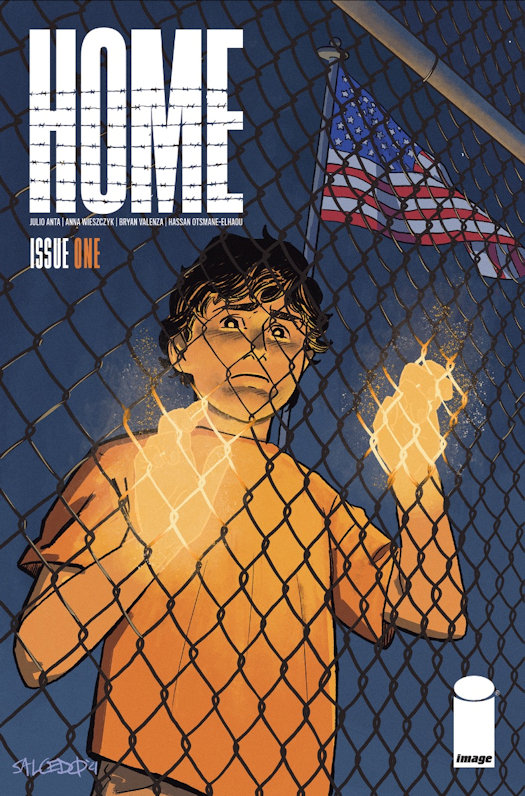 and artist Anna Wieszczyk will boast a special, collectible series of variant covers featuring artwork by the lauded Jacoby Salcedo.

Salcedo is a longtime collaborator with Anta. They’ve previously worked together on “The Price of Freedom,” “Between Two Worlds,” and “Balseros,” mini comics which were published in anthologies like COVID Chronicles and magazines like Panel X Panel. The pair have a forthcoming graphic novel together, Frontera, slated for 2023 with HarperAlley.

There will be a Salcedo variant available for each issue of the five-issue miniseries in stores this April.

The new series Home explores the real-world implications of a migrant with extraordinary powers, and will launch from Image Comics in April.

Home follows a young boy who is torn away from his mother while seeking asylum at the U.S. border, just as something begins to change in him. He doesn’t know it yet, but it’s the onset of superhuman abilities that will change his life forever.

Home #1 will also be available for purchase across many digital platforms, including Amazon Kindle, Apple Books, comiXology, and Google Play.

ABOUT IMAGE COMICS
Image Comics is a comic book and graphic novel publisher founded in 1992 by a collective of bestselling artists. Image has since gone on to become one of the largest comics publishers in the United States. Image currently has six individuals on the Board of Directors: Robert Kirkman, Erik Larsen, Todd McFarlane, Marc Silvestri, Jim Valentino, and Eric Stephenson. It consists of five major houses: Todd McFarlane Productions, Top Cow Productions, Shadowline Comics, Skybound Entertainment, and Image Central. Image publishes comics and graphic novels in nearly every genre, sub-genre, and style imaginable. It offers science fiction, fantasy, romance, horror, crime fiction, historical fiction, humor and more by the finest artists and writers working in the medium today. For more information, visit www.imagecomics.com.
Posted by Qwill at 4:30 PM