Days of the Dead Tour - The Badass Women of the Assassins of Landria by Gail Z. Martin

Please welcome Gail Z. Martin to The Qwillery as part of her ongoing DAYS OF THE DEAD TOUR! 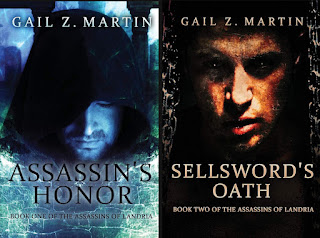 The Badass Women of the Assassins of Landria
By Gail Z. Martin
Assassins of Landria is my buddy-flick epic fantasy, full of snarky action, fast-paced adventure, and epic fantasy feels without the epic length. Unconventional assassins Joel “Ridge” Breckenridge and his best friend and partner-in-mayhem Garrett “Rett” Kennard take center stage, but they wouldn’t have survived Book 1 without the help of three badass women.
Lady Sally Anne inherited the lands, title and assets of her late husband, as well as the fortress of Harrowmont. There are whispers that he was abusive, and that his death may not have been entirely natural. Granted protection by wealth, status and very thick stone walls, Lady Sally Anne has turned Harrowmont into a haven for women fleeing abusive marriages, for those in danger because they have banned magical talent, and for the psychically-gifted orphans rescued from being trafficked by the Witch Lord’s supporters.
Harrowmont is self-sufficient with farming, livestock, and the ability to make what its residents need. Those who find sanctuary there learn to read and write and do sums, but they also rotate through the tasks necessary to defend the fortress and keep it functioning, learning essential skills. By marshaling the forbidden magic of residents gifted with mediumship and clairvoyance, Lady Sally Anne is able to communicate with Ridge, Rett and their allies across distance, providing vital information to the effort to protect the kingdom and defeat the Witch Lord.
Lorella is a talented medium who had once been coerced into using her talents to benefit one of the Witch Lord’s co-conspirators. Ridge and Rett freed her from that servitude, and she has used her abilities since then to rally the kingdom’s restless ghosts for surveillance, defense and intelligence-gathering. She’s saved Ridge and Rett numerous times, and helped to save the kingdom as well.
Caralin is one of the King’s Shadows—an elite assassin like Ridge and Rett. She’s one of the few Shadows who doesn’t hold the duo’s unorthodox methods and higher-than-average success rate against them. Caralin’s an excellent fighter and strategist, and is one of the few allies Ridge and Rett have within the palace ‘establishment’ which has been largely turned against them by the Witch Lord. We haven’t seen a lot of Carlin thus far, but she’s done the boys some good turns when the chips were down. Expect her to play a more visible and vital role as the series moves forward!
What else is new? Plenty! Sons of Darkness (Night Vigil Book 1) and Inheritance (Deadly Curiosities Book 4) are now on audiobook. Monster Mash and Creature Feature are the newest Spells Salt and Steel books. Witch of the Woods and Ghosts of the Past are the newest in the Wasteland Marshals series, and Black Sun is the latest Joe Mack Adventure. Coming soon: Fugitive’s Vow (Assassins of Landria Book 3), Chicagoland (Joe Mack 3), and Reckoning (Darkhurst Book 3). Watch for new Deadly Curiosities, Night Vigil and Salvage Rat books as well!
My Days of the Dead blog tour runs into November with brand new guest blog posts and more!
Assassin's Honor
Assassins of Landria 1
Ethan Ellenberg Literary Agency, October 2018
Trade Paperback and Kindle eBook, 193 pages 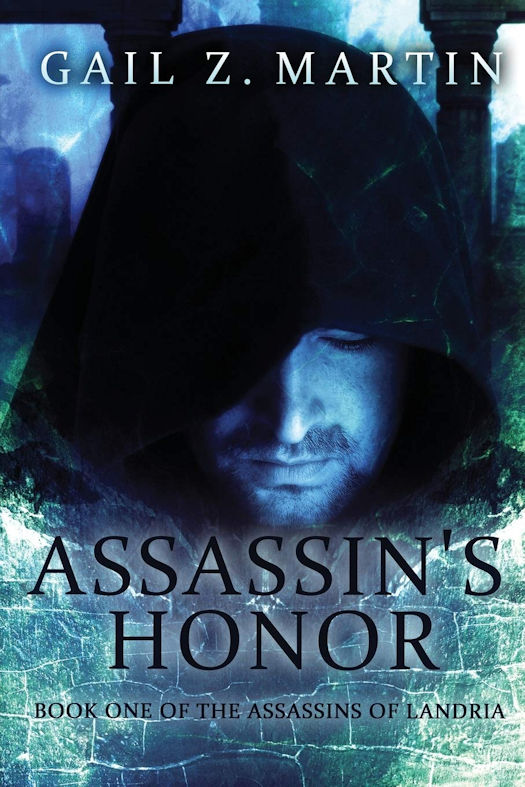 First in the new Assassins of Landria series from the award-winning, bestselling author of Scourge: A Novel of Darkhurst, and the Chronicles Of The Necromancer books!
Friends since their orphanage childhood, Joel “Ridge” Breckinridge and Garrett “Rett” Kennard rose through the ranks of the Landrian army together, from teenaged conscripts to seasoned fighters. Together, they became the most feared team of assassins in Landria, surviving longer that most in their profession by virtue of excellent fighting skills, legendary bravado, peerless strategy, and an uncanny synchronicity. Henri, their long-suffering squire, tends to the thankless jobs of provisioning and logistics, while Ridge and Rett fight and recover.
When wandering mystic Yefim Makary becomes the darling of disenchanted aristocrats, Rett and Ridge fear Makary—or the Witch Lord, as his followers call him—is a threat to the crown. As treasonous whispers spread, Ridge and Rett go rogue to stop the threat, save the kingdom and protect the king—while landing on the “Most Wanted” list themselves! 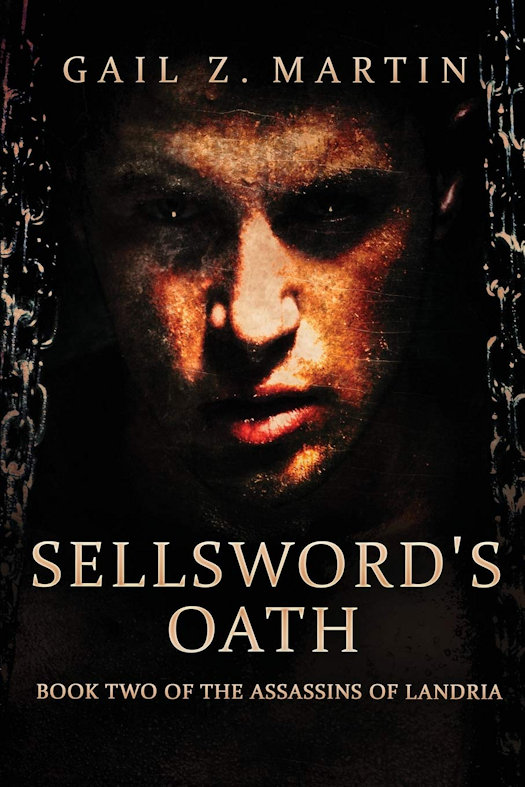 Buddy flick epic fantasy! The second in the Assassins of Landria series from the award-winning, bestselling author of Scourge: A Novel of Darkhurst and The Chronicles Of The Necromancer books!
Wandering mystic Yefim Makary, known to his followers as the ‘Witch Lord’, disappeared before he could be accused of inciting dissent against King Kristoph. His supporters among the disenchanted aristocrats who weren’t arrested have fled or died by their own hand. The king is happy to put the matter behind him. Yet Burke, the commander of the elite King’s Shadows, doesn’t believe the threat is over, and he assigns his two most troublesome, rule-breaking—and successful—assassins to ferret out the real threat and put a stop to Makary’s plots.
Joel “Ridge” Breckinridge and Garrett “Rett” Kennard rose through the ranks of the Landrian army together, from teenaged conscripts to seasoned fighters. Together, they became the most feared team of assassins in Landria, surviving longer that most in their profession by virtue of excellent fighting skills, legendary bravado, peerless strategy, and an uncanny synchronicity.
As the threads of a new plot come together revealing disloyalty among the priests and generals, Ridge and Rett once again find themselves on the run, hoping they and their allies can figure out the Witch Lord’s latest scheme before it costs them their lives—and the king his throne. 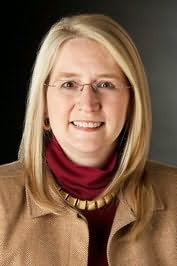 About Gail
Gail Z. Martin is the author of Scourge: A Darkhurst Novel, from Solaris Books. Gail is also the author of Vendetta: A Deadly Curiosities Novel and Trifles and Folly 1: A Deadly Curiosities Collection, the latest in her urban fantasy series set in Charleston, SC; Shadow and Flame is the fourth book in the Ascendant Kingdoms Saga; The Shadowed Path (The first Jonmarc Vahanian Adventures collection), as well as Iron and Blood a Steampunk series, and Spells, Salt, & Steel, both co-authored with Larry N. Martin.
She is also author of Ice Forged, Reign of Ash, and War of Shadows in The Ascendant Kingdoms Saga, The Chronicles of The Necromancer series (The Summoner, The Blood King, Dark Haven, Dark Lady’s Chosen); The Fallen Kings Cycle (The Sworn, The Dread) and the urban fantasy novel Deadly Curiosities and Tangled Web. Gail writes three ebook series: The Jonmarc Vahanian Adventures, The Deadly Curiosities Adventures and The Blaine McFadden Adventures. The Storm and Fury Adventures, steampunk stories set in the Iron & Blood world, are co-authored with Larry N. Martin.
Gail’s work has appeared in over 35 US/UK anthologies. Newest anthologies include: The Big Bad 2, Athena’s Daughters, Heroes, Space, Contact Light, With Great Power, The Weird Wild West, The Side of Good/The Side of Evil, Alien Artifacts, Cinched: Imagination Unbound, Realms of Imagination, Clockwork Universe: Steampunk vs. Aliens, Gaslight and Grimm, Baker Street Irregulars, Journeys, Hath no Fury and A Haven Harbor Halloween.
You can also find Gail on: www.GailZMartin.com, Twitter @GailZMartin, on Facebook.com/WinterKingdoms, at DisquietingVisions.com on Goodreads https://www.goodreads.com/GailZMartin and free excerpts on Wattpad http://wattpad.com/GailZMartin.
Posted by Qwill at 10:00 AM