A Conversation with Evie Green Author of WE HEAR VOICES

Please welcome Evie Green to The Qwillery. We Hear Voices, her first horror novel, will be published on December 1, 2020 by Berkley. 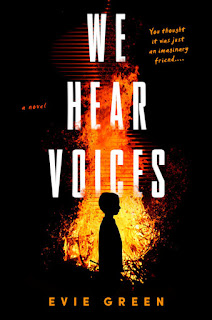 Tell us about WE HEAR VOICES. What inspired you to write this story?
Many years ago, when I was about 9 or 10, I read a book by John Wyndham, called Chocky It’s about a boy with a voice in his head, told from the point of view of his baffled father. A few years ago, I found a copy of it in a second hand bookshop, so I read it again and could not get the ideas it sparked off out of my head. I started writing without really knowing what was going to happen, and many years later, WE HEAR VOICES is the result.
This is your first horror novel. What drew you to write in the genre?
Funnily enough, I never set out to write a horror novel! I wrote the book that was in my head, and I suppose it went through a few gears, from thriller to speculative fiction, then sci fi, and finally to horror. Genre is a strange thing! Also, its first draft didn’t have a pandemic in it. I added it in as a bit of exciting background, with absolutely no idea of how relevant that aspect would become. It did mean I was well up to speed with face masks and so on by the time COVID 19 came along.
Your story is about a boy with a dangerous imaginary friend, but also about a family and how that family copes in the aftermath of challenging times. Why did you choose to incorporate such a strong family storyline into your novel?
WE HEAR VOICES is a family novel before all else I have three teenage children, and two stepchildren, so my family is at the heart of all I do, and I’m really interested in the immediacy of questions like how far you would go to protect your child. One of the protagonists, Nina, is a teenage girl, and in a way she’s a lot like my eldest child, in that she’s more sensible than most of the adults around her! I think that teenagers have an undeserved bad reputation: I love having them around, and always really enjoy meeting their friends. In my other life I write YA fiction, so I’ve got a great affection for good teenage character, and wanted Nina to be as much a part of the plot as her mother. However, Rachel is really at the centre of it all. She’s had her own struggles in the past, and has to contend wit h a desperately ill child, a pandemic, dealing with her ex husband, and then death and destruction at the hands of her own possessed child. She could easily fall apart, but she manages to hang on most of the time.
What kind of research was required befo re writing WE HEAR VOICES?
As space travel is a part of the book, I spoke to an old university friend, Kevin Fong, who’s now an expert on the human body in space as well as a medical doctor and astrophysicist! During the course of our conversation, we also talked about pandemics, and he said that the number one worry of governments worldwide is a pandemic, and that one would happen sooner or later. We had absolutely no idea at that point that there was one approaching. I was mainly after his expertise on space colonisation, however, and took the information he gave me and ran with it, fictionally. My brother is an epidemiologist, so I also got some advice from him, though the pandemic itself is just ending at the start of the book. I considered whether the WE HEAR VOICES world would have had a full lockdown and decided that it wouldn’t, for economic reasons, so they have rules about facemasks and so on, but the virus has mainly been left to sweep though the population.
What do you hope readers will take away from your novel?
The one thing that didn’t change through the many drafts of this novel was the ending: I’ve always wanted it to end with a shock (as I like reading books like that) so I hope that’s enjoyable. In a broader sense, I suppose I’d like them to think about family, about the questions of how far you defend your child if they do something indefensible, and what on earth a parent can do if they feel their child is out of control. Child mental health is a huge problem worldwide at the moment, and it has huge ramifications for the future.
We Hear Voices
Berkley, December 1, 2020
Hardcover and eBook, 384 pages 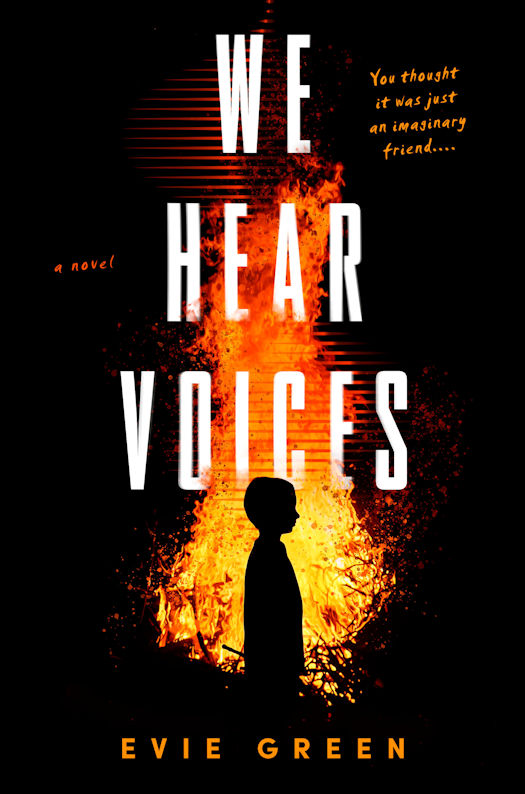 An eerie horror debut about a little boy who recovers from a mysterious pandemic and inherits an imaginary friend who makes him do violent things…
Kids have imaginary friends. Rachel knows this. So when her young son, Billy, miraculously recovers from a horrible flu that has proven fatal for many, she thinks nothing of Delfy, his new invisible friend. After all, her family is healthy and that’s all that matters.
But soon Delfy is telling Billy what to do, and the boy is acting up and lashing out in ways he never has before. As Delfy’s influence is growing stranger and more sinister by the day, and rising tensions threaten to tear Rachel’s family apart, she clings to one purpose: to protect her children at any cost—even from themselves.
We Hear Voices is a gripping near-future horror novel that tests the fragility of family and the terrifying gray area between fear and love.

Amazon : Barnes and Noble : Bookshop : Books-A-Million : IndieBound
Google Play : iBooks : Kobo
About Evie
Evie Green is a pseudonym for a British author who has written professionally for her entire adult life. She lives by the sea in England with her husband, children, and guinea pigs, and loves writing in the very early morning, fueled by coffee.
Website  ~  Twitter
Posted by Qwill at 8:00 AM