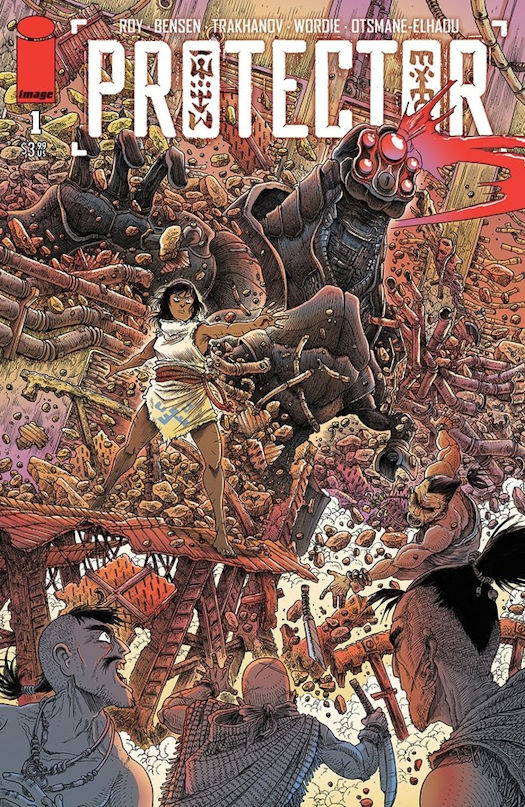 "Protector is an idea that can't be pinned down to any one brain. Simon took the first step when he made a project about godlike aliens assisting in a post-apocalypse archaeological dig. I asked Simon questions about the world, which started a conversation that also included the speculative shaman-king C.M. Kosemen. Between us, we started evolving a story," said Bensen. "Simon sketched that scene out, and it floated around on the internet until Artyom got a hold of it and blasted it into the next dimension! I doubt anything would have come of Protector without Artyom's frenetic woodprint-like chunks of black and white. There's this image of 'the slave girl' (we didn't know her name at that point) riding on this awful cyborg cyclops as it claws its way out of the ruins of the old world...we knew we had to finish this story."

Equal parts Conan the Barbarian, Mad Max, and The Expanse, Protector is set in far-future North America. Of all the tribes that dwell in the hot ruins, the Hudsoni reign supreme, but even they fear and obey the godlike Devas. When the Devas warn of an old-world demon in the conquered city of Shikka-Go, Hudsoni war chief First Knife decides to deal with the threat personally.

Roy added: "I've always been a big fan of Artyom's work, and when we started talking about some sort of collaboration, I immediately thought of the Far-Future Iron-age adventure Daniel and I had been workshopping years earlier. Once we actually started work on the project, choosing Jason—who I had met and collaborated with, back in art school, and who had already started working with Artyom on Turncoat—for colors was a perfect fit!"

Protector #1 will also be available for purchase across many digital platforms, including the official Image Comics iOS app, Amazon Kindle, Apple Books, comiXology, and Google Play.

ABOUT IMAGE COMICS
Image Comics is a comic book and graphic novel publisher founded in 1992 by a collective of bestselling artists. Image has since gone on to become one of the largest comics publishers in the United States. Image currently has six individuals on the Board of Directors: Robert Kirkman, Erik Larsen, Todd McFarlane, Marc Silvestri, Jim Valentino, and Eric Stephenson. It consists of five major houses: Todd McFarlane Productions, Top Cow Productions, Shadowline Comics, Skybound Entertainment, and Image Central. Image publishes comics and graphic novels in nearly every genre, sub-genre, and style imaginable. It offers science fiction, fantasy, romance, horror, crime fiction, historical fiction, humor and more by the finest artists and writers working in the medium today. For more information, visit www.imagecomics.com.
Posted by Qwill at 9:28 AM