Review: Spells at the Crossroads by Barbara Ashford 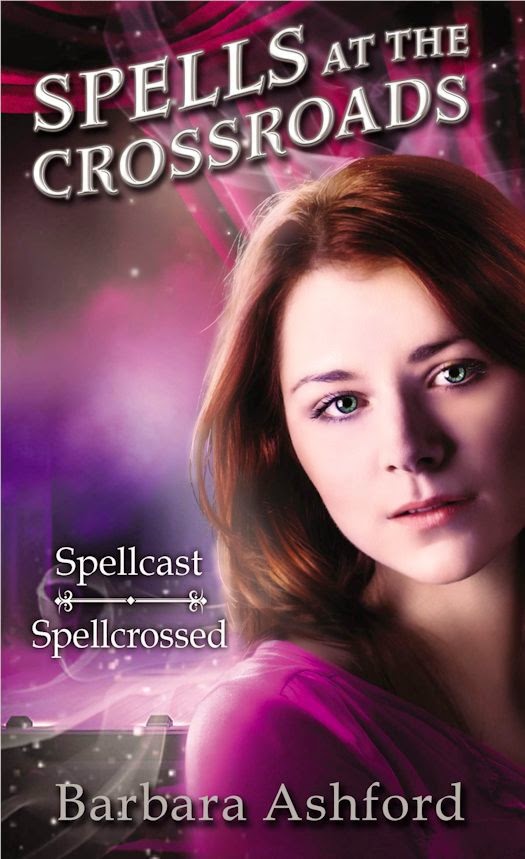 Maggie Graham was having a very bad summer. First, she lost her job. Then the bathroom ceiling in her Brooklyn apartment collapsed. That was when Maggie decided it was time to run away from home for awhile. On the road to Vermont for her weekend away, she impulsively took the exit for a town called Dale. For some reason, the area felt familiar, especially the big white barn she passed on the way to town.

What came next was the biggest adventure in Maggie's life. Her experience as an actor landed her a job in the summer stock company of the Crossroads Theatre, housed in that same white barn, but none of her professional credits could prepare her for the magic that happened on this stage. Or for the theatre's unorthodox staff, especially its moody and mysterious director.

That staff and stage will soon become family to Maggie, but all the magic in the world might not be enough to keep them safe—with threats ranging from interfering board presidents to imprisonment in the realm of Faerie....

I’m a pretty dauntless reader, but I started reading this book not knowing what to expect. I don’t know much about theatre, and the main character, Maggie Graham, is an actress. She hangs out with other actors and they share the common knowledge of the storylines of plays, songs, and stage vocabulary that I just don’t know. This being said, I still had a wonderful time in Maggie’s world. This 2-in-1 mass market tome was bulky to hold and sometimes awkward to read but by the time I finished Spellcast, I was glad I didn’t have to go out hunting for the second novel, Spellcrossed.

As you may have guessed by the titles, there is something supernatural going on in this story. I thought Ashford took very interesting liberties in the portrayal of a favorite supernatural species, but I was ok with that. I was totally surprised when I found out what the magical being actually is, the way magic is used, and the history behind that magic. One of my favorite genres to read is historical fiction and this omnibus had a wonderful “looking into the past” element to it, giving the characters another dimension—a realness to them that made me keep turning the pages. I’m always intrigued how characters in books (especially books that take place over hundreds of years) change, sometimes for the better and sometimes for the worse.

Maggie is a wonderful and real character that doesn’t always makes the right choice but she is strong, funny, and determined. Something draws her to Vermont (it’s not even foliage season) and she can’t put her finger on it. She commits to stay the summer and act in three plays at the Crossroads, a beautiful barn theatre in Dale, Vermont. While reading this book, I did have a sense of unease. I couldn’t place it. Something was wrong and it was bugging me. The day I finally figured it out, I had to laugh at myself. The “problem” was that the world was not going to end, no one was trying to kill Maggie, and she didn’t need to set up alliances with anyone, supernatural or otherwise. There was no upcoming battle. The summer was just going to end and Maggie was going to go back to her apartment in NYC. I guess that tells you what kind of books I’ve been reading (murderer on the loose, vampires avenging a death, werewolf pack dynamics, etc.)

I would like to hear what a theatre buff would think of this and I’m wondering if a “hell week” is really as bad as Ashford described. The author’s descriptions of Vermont are beautiful and the town of Dale is especially charming. Maggie is my favorite character but there are so many other good ones I can’t pick just one second favorite. Spellcast and Spellcrossed are beautiful and wonderful stories about the love of the stage, finding where you belong, and helping others. The stories show how love is difficult when both parties are still letting their past haunt them. Together they are a tale of redemption and hard choices, atonement for mistakes and standing up for what you believe in, even if you are standing alone. Brava! Barbara Ashford, you have made a wonderful world that I would love to return to!

Here is the Author's Note from the Omnibus edition. Thank you to Barbara for sharing it with us.

Author’s Note
Before I began writing fiction, I wrote musicals. And before I wrote musicals, I acted in them – in summer stock and dinner theatres all over the country. In swanky hotels and quaint country inns, in a converted church in upstate New York and in a dilapidated barn in Southbury, Connecticut.

I acted in brilliant shows and schlocky ones, in air-conditioned comfort and in stifling summer heat. I soldiered through wardrobe malfunctions and choreographic collisions, props that went missing and revolving sets that refused to revolve, blood packs that leaked before the fatal gunshot went off and gunshots that failed to go off altogether. I performed for audiences who were enthralled, audiences who were indifferent, and audiences who were much more interested in the dinner buffet than the show. I worked with gifted performers as well as dreadful ones, with directors who were inspirational and others who were downright sadistic. I met people who slipped out of my life after the curtain came down, others who became lifelong friends, and – at the Southbury Playhouse – my future husband.

I poured those experiences and many more into Spellcast and Spellcrossed, the two novels that make up this omnibus. And I poured myself into protagonist Maggie Graham, giving her my string of jobs, my hometown, my sense of humor, and – most of all – my love for the theatre.

The Southbury Playhouse is gone now, demolished to build a shopping center. But I’ll always remember the seasons I spent there. I hope the time you spend at the Crossroads Theatre will prove memorable as well, and that its magical spell will linger long after you close this book.

What:  One entrant will win a Mass Market Paperback copy of Spells at the Crossroads by Barbara Ashford from The Qwillery.

Who and When:  The contest is open to all humans on the planet earth with a mailing address. Contest ends at 11:59PM US Eastern Time on September 13, 2014. Void where prohibited by law. No purchase necessary. You must be 18 years old or older to enter