Guest Blog by Paige Shelton, plus Review and Giveaway of If Catfish Had Nine Lives - August 7, 2014


Please welcome Paige Shelton to The Qwillery. If Catfish Had Nine Lives, the 4th Country Cooking School Mystery, was published on August 5th by Berkley. 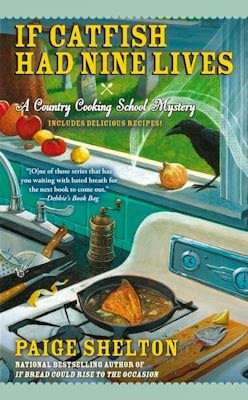 So Many Books
by Paige Shelton


When people ask me about the books I’m working on I’m happy to share, but by about the second book I mention, eyes begin to glaze and head nodding becomes more adamant, and then people step back a little as though they might catch something deadly from me. They ask – how are you writing so many series?

The simple answer is “one word at a time.” But there really is a little more to it than that.

IF CATFISH HAD NINE LIVES, the fourth book in my Country Cooking School Mystery Series, publishes August 5, and it was a joy to write. I’m so excited about this book. I’m thrilled to have had the chance to write it, along with books from three other series I’m working on.

So, really though, why would anyone want to write four series?

It took me a long time to get published, and now that I’m there I don’t want to miss out on the chance to do whatever I can do to make all my ideas come alive. To make the process work, however, I know I have to do two things: 1. Write my word count on each project, every day, Monday through Friday. 2. Take detailed notes. If I stick by these rules, the books come together, little bit by little bit. Oh, there are days when the word count seems insurmountable, but what keeps me typing is the fact that I know that the next day’s word count will double if I don’t get it done today. Or, I might have to work on the weekends. I used to always write every weekend, but I’ve now found that if I take Saturday and Sunday off, by Sunday night I’m itching to get back to writing Monday morning. When I worked outside my home office, in jobs that weren’t always awful, I dreaded Sunday nights because I would wallow in the fact that I had to get up and get back to work on Monday. Now, my Sunday nights are anxious with anticipation to hit the keyboard as soon as I can. It gives me a great push on momentum.

Writing books is my job. Some days, the words come easy and I get to take a half day off, maybe get a pedicure or go out to lunch with a friend. And some days require some overtime, but that’s okay. I’m really pleased with the way things seem to be working out. My boss, my conscience, can be kind of annoying sometimes, but I’ve had worse bosses.

So, when someone asks what I’m working on, instead of listing each and every book, I should probably just say something like, “lots of projects, because I have the best readers ever and I don’t ever want to let them go.” Yeah, I like that idea. 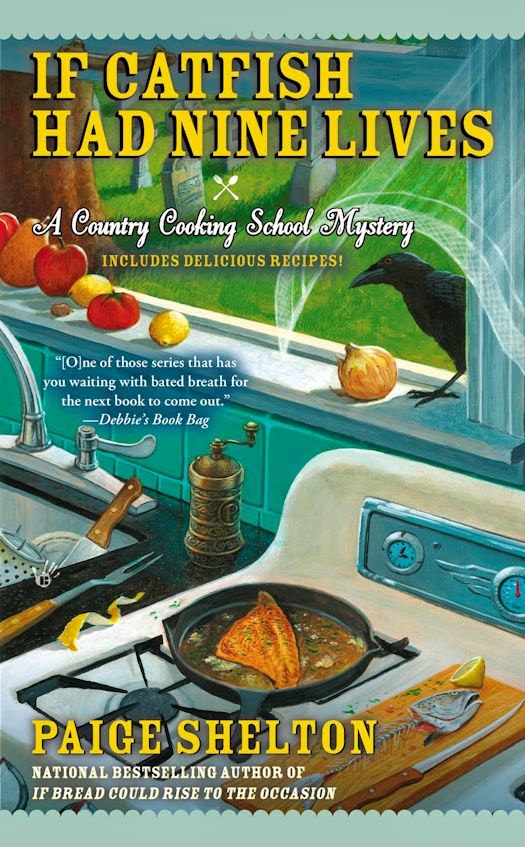 Betts Winston has inherited more than her cooking skills from her grandmother—she can also see and talk to ghosts of people that once roamed the streets of Broken Rope, Missouri, in the days of the Old West…

With Gram’s Country Cooking School on spring break, Betts and Gram are taking part in this year’s cowboy poetry convention, offering lessons on frying catfish over an open campfire. But when a staged gunfight ends in real death and her brother Teddy becomes a prime suspect, Betts may be the one to jump from the frying pan into the fire.

After her ghostly guardian Jerome appears to watch her back and a spectral Pony Express rider gallops into town with some unfinished business, Broken Rope starts to seem more like a cowboy ghost convention. With trouble on both sides of this mortal coil, it’s up to Betts to clear her brother, put the spirits to rest, and make sure the true killer doesn’t become the one who got away.

In her fourth Country Cooking School Mystery, Paige Shelton serves up cooking, ghosts, murder, history, and mystery. We return to Broken Rope, Missouri for a cowboy poetry convention which is being held in April. Cowboys, actors, and more have come from all over the place to take part in cowboy poetry readings, music, plays, and more. One of the actors is murdered during a play taking place on Main Street. With the many extra people in town, the Broken Rope police department and Betts will have a hard time figuring out why the actor was killed.

Jerome (a ghost) is back town. He generally shows up when Betts is going to need protecting. In addition, 2 more ghosts appear - Joe, a Pony Express rider, and his horse. I was completely fascinated by the history of the Pony Express that Shelton shared in the story.

Jerome pops in and out while keeping an eye on Betts and taking care of some other things he has to do. Yes, ghosts have compulsions! Gram and Betts have cooking demonstrations to give as part of the convention and ghosts to help. The Pony Express rider, Joe, had letters he must deliver. Betts and Gram must help Joe with that task. In addition Betts is involved with the trying to figure out who killed the actor and how her brother Teddy may be involved in what has happened. Cliff, Betts boyfriend and a Broken Rope cop, is busy with the murder investigation, but still makes time for Betts when he can. He does not know about Betts' ability to see and communicate with ghosts. Betts also has feeling for Jerome. Yes, the ghost. I hope we see more of Jerome. I am really curious to see how Betts resolves her feelings both Cliff and Jerome.

There is a lot going on in If Catfish Had Nine Lives but Shelton handles the different plot threads well as they move towards each other to a surprising and satisfying conclusion.There are so many interesting characters in this book. Shelton does a good job of giving us insights into their personalities without pointing to one person as the murderer. The murder mystery was inventive and the reason behind the killing surprising.

Learning about the Pony Express plus the inclusion of several of recipes (all of which I must try) are an added bonus to a fun paranormal cozy mystery with wonderful characters both living and ghostly. If Catfish Had Nine Lives is a terrific addition to the Country Cooking School Mystery series. 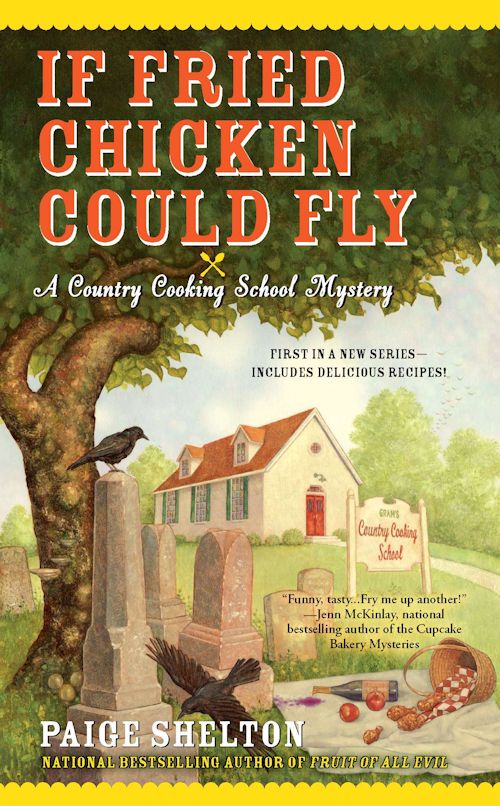 At Gram’s Country Cooking School, Betts and Gram are helping students prepare the perfect dishes for the Southern Missouri Show-Down, the cook-off that draws the first of the summer visitors. Everything is going smoothly until they discover the body of local theater owner Everett Morningside in the school’s supply closet, and Everett’s widow points an accusatory finger at Gram. Now, Betts has to dig deep into Broken Rope’s history to find the modern-day killer—before the last piece of chicken is served... 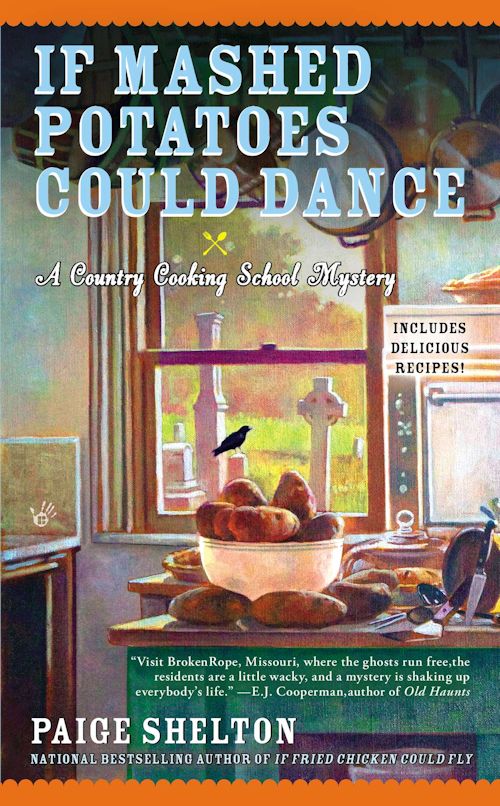 At Gram’s Country Cooking School in Broken Rope, Missouri, Isabelle “Betts” Winston and her grandmother share the secrets of delicious home-style recipes. But there’s one secret they keep from their classes—their ability to talk to ghosts from the town’s colorful past...

Betts and Gram agree to help their friend Jake at Broken Rope’s Historical Society by accommodating some foodie tourists for the night and occupying them with cooking lessons. It couldn’t be worse timing when the pair encounter the ax-wielding ghost of Sally Swarthmore, one of Broken Rope’s legendary murderers, who pleads with Betts to help find her diary—a diary that could prove that Sally was really a victim, not a villain.

But they soon have a modern-day murder on their hands when one of the tourists turns up dead with a noose around his neck and two other tourists are nowhere to be found. Now Betts needs to put the cooking classes on the back burner to untangle two knotty mysteries and rope in a cold-blooded killer.


If Bread Could Rise to the Occasion
A Country Cooking School Mystery 3
Berkley, August 6, 2013
Mass Market Paperback and eBook, 304 pages 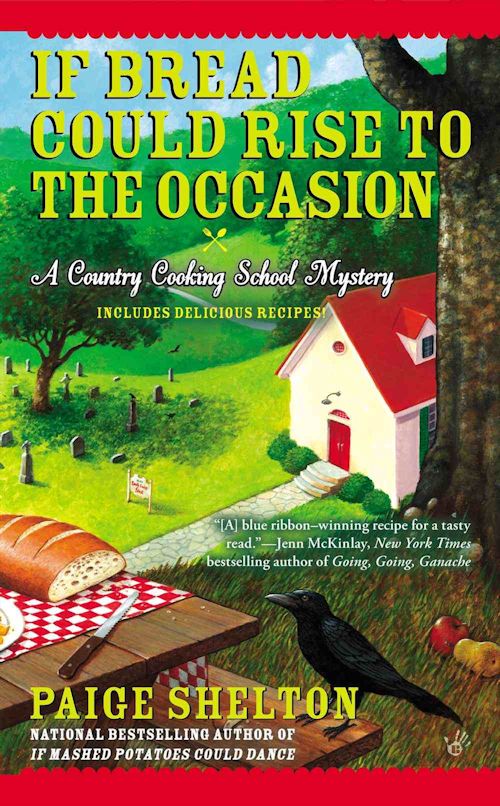 At Gram’s Country Cooking School, Isabelle “Betts” Winston and her grandmother share their home-style culinary secrets. But what they keep to themselves are the secrets of Broken Rope, a quiet little Missouri town, that isn’t nearly as quiet as it seems...

A fresh school year begins as Gram and Betts anxiously await the arrival of their new crop of students. But their enthusiasm is thwarted when a stranger named Freddie O’Bannon arrives and claims to have proof that he was accepted to the school despite what is in their files. And when the ghost of Cylas Gent, a young man who might have a romantic past with Gram, also appears, there are suddenly two mysteries demanding their attention.

But just as Gram and Betts start sifting through the past, one of their new students is murdered. Does the seemingly sweet Freddie O’Bannon have something sinister to hide, or are Gram’s ghosts trying to teach her a lesson? Either way, it’s up to the country cooks to catch a killer before another living soul gets burned. 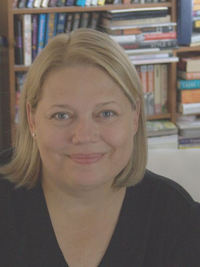 Paige Shelton is the national bestselling author of the Farmers' Market Mysteries and the Country Cooking School Mysteries. She grew up in the Midwest but moved to Salt Lake City, Utah, after college. Paige enjoys reading, listening to music from the 80s, and watching way too many zombie movies with her husband and son.

What:  One entrant will win a Mass Market Paperback copy of If Catfish Had Nine Lives by Paige Shelton from the publisher. US ONLY

Who and When:  The contest is open to all humans on the planet earth with a US mailing address. Contest ends at 11:59PM US Eastern Time on August 15, 2014. Void where prohibited by law. No purchase necessary. You must be 18 years old or older to enter