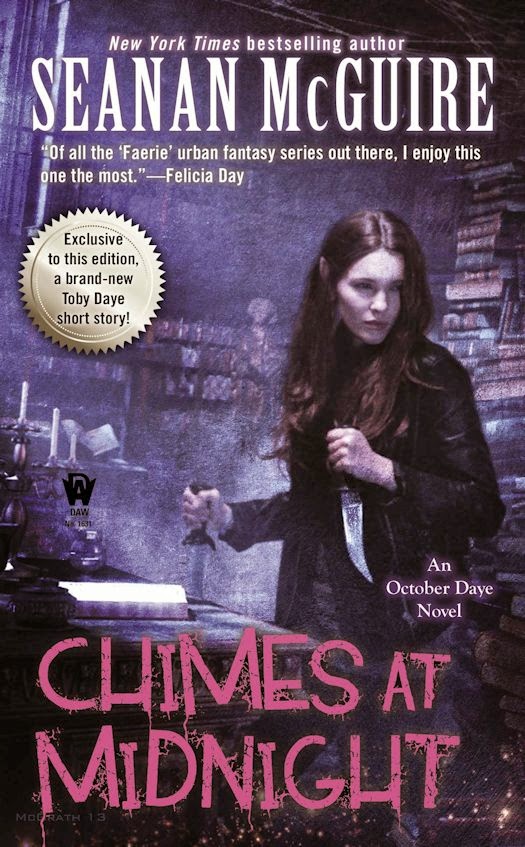 Things are starting to look up for October "Toby" Daye. She's training her squire, doing her job, and has finally allowed herself to grow closer to the local King of Cats. It seems like her life may finally be settling down...at least until dead changelings start appearing in the alleys of San Francisco, killed by an overdose of goblin fruit.

Toby's efforts to take the problem to the Queen of the Mists are met with harsh reprisals, leaving her under sentence of exile from her home and everyone she loves. Now Toby must find a way to reverse the Queens decree, get the goblin fruit off the streets--and, oh, yes, save her own life, since more than a few of her problems have once again followed her home. And then there's the question of the Queen herself, who seems increasingly unlikely to have a valid claim to the throne....

To find the answers, October and her friends will have to travel from the legendary Library of Stars into the hidden depths of the Kingdom of the Mists--and they'll have to do it fast, because time is running out. In faerie, some fates are worse than death.

October Daye is about to find out what they are.

Seanan McGuire has created a fantastic Faerie world set in the San Francisco area. The Kingdom of the Mists is home to Toby Daye, a knight of the realm and sometimes a private detective solving mysteries for her lieges. Up until this novel, Toby has continued to gain strengths and powers that served her well in her efforts to ensure that changelings and Faery citizens are treated equally. However, in her efforts to track down the source of the goblin fruit, Toby is exiled by her nemesis, the Queen in the Mists, and she suffers a mishap that affects how she interacts with Faery.

Toby always has been an independent character, relying on herself alone and laying her life on the line for those she loves in effort to keep them safe. But she must take a back seat for much of this tale and rely upon her friends, May, Jazz, and Danny, her page Quinton, and her new love, Tybalt, the King of Cats. Toby finds that very difficult to do. The struggle she has is one that may be familiar to some people – how to let other people help when one is weak.

McGuire fills out more of her Faery world in this novel. The tale not only centers on the Kingdom of the Mists, but also on the Undersea Kingdom, Goldengreen, and the High Kingdom itself, which oversees all of the Faery lands. The mystery about who is behind the goblin fruit epidemic is solved very quickly, and the rest of the story focuses on how Toby’s efforts after the big reveal. The plot moved quickly, and the resolution was satisfying.

I loved learning more about the various Faery races, the Firstborns, and the other realms. McGuire does a good job at integrating her explanations into the narrative without being overly explanatory. Chimes at Midnight was a quick read for me, and I enjoyed every minute of it.