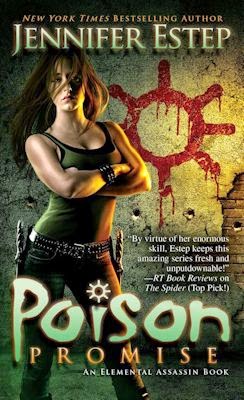 TQ:  Welcome to The Qwillery. You've written over 20 published novels. What is the most challenging thing about writing for you? How has your writing process changed since the publication of your 1st novel? Are you a plotter or pantser?

Jennifer:  Thanks! I appreciate that.

For me, one of the most challenging things is just making the time to sit down and actually write a book. Authors do so many things – social media, blogging, answering reader comments/questions, etc. – that it can be hard to carve out actual writing time.

I think my process has gotten a little more streamlined, especially when it comes to things like going through copy edits or reading through page proofs. But for the most part, the way that I write a book is still the same.

I’m definitely a panster. I don’t really do any outlining or pre-planning before I start working on a book. I think about my heroine, her magic, and what the big turning points are in the story. Then, when I have those things in mind, I sit down and start writing my rough draft. Then, when that’s done, I’ll go back through the draft and see what story elements I like and which ones I don’t. Sometimes, being a panster works out on some books better than others, but it’s just the method that works best for me.

TQ:  Poison Promise is the 11th Elemental Assassin novel. How do you keep things fresh in a long-running series? Do you have a system to keep track of events, character traits, etc.?

Jennifer:  I think a challenge with writing any series is giving fans of the series all the familiar elements that they enjoy – characters, settings, etc. – while still keeping things fresh and interesting, both for fans and new readers. Whenever I sit down to write a new Elemental Assassin book, I always try to think of new things, including new places for Gin and my other characters to visit in Ashland and new bad guys with new magic for Gin to face down. I always look back at the previous books and try to do something a little different than I have before.

I don’t really have a system for keeping track of things. I tried to do a series bible one time and realized that I could spend that time writing the next book instead. So, for the most part, all of the characters, world building, etc. is in my head. However, I do go back and refer to the books if I get stuck on a certain detail or question.

TQ:  How has Gin evolved over the course of the series?

TQ:  Please tell us something about Poison Promise that is not in the book description.

Jennifer:  I always enjoy writing fight scenes, so there is a lot of action and adventure in Poison Promise.

TQ:  What kinds of research have you done for Poison Promise?

Jennifer:  I always joke that I write fantasy books so I can make up the whole thing. LOL. I do some research for my books, but I would say that I do much more world building – again, thinking up new bad guys with new powers and new ways for Gin to use her own magic to defeat them.

TQ:  Which character in the Elemental Assassin series so far has surprised you the most? Other than Gin, do you have a favorite character?

Jennifer:  I would say that Fletcher Lane, Gin’s mentor, has surprised me the most. Something happens to Fletcher in Spider’s Bite, the first book, but he still remains very much a part of Gin’s life throughout the series. When I started writing the series, I didn’t really expect him to keep being such a big influence on her, all these books later.

Finnegan Lane, Gin’s foster brother, is probably the character that’s the most fun for me to write, just because he’s so shameless, greedy, playful, and over-the-top.

Jennifer:  Right now, I’m working on Black Widow, the 12th book in my Elemental Assassin series which will be published on Nov. 25.

TQ:  hank you for joining us at The Qwillery.

Jennifer:  Thanks for hosting me on your blog! I appreciate it. 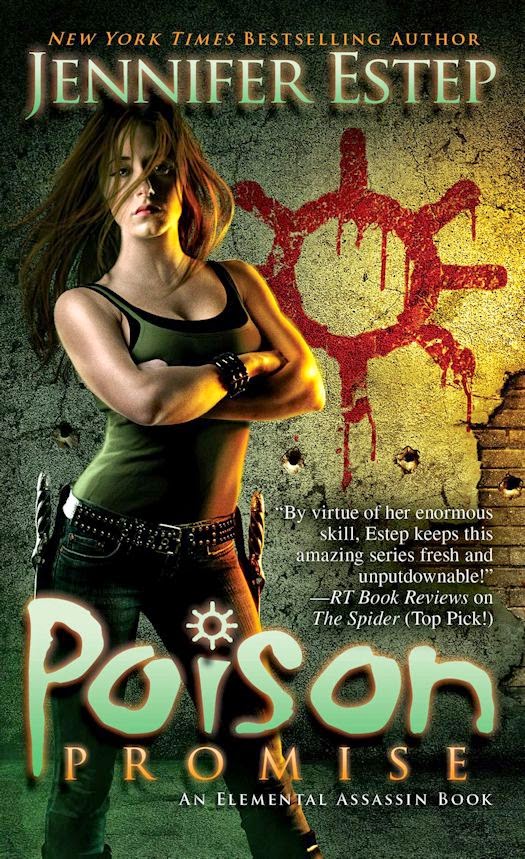 Gin Blanco is hard-nosed, sexy, and lethal. Nicknamed “The Spider,” she’s a stone elemental assassin who brings her unique mix of magic and tact to every assignment, no matter the target.

There’s a new drug on the streets of Ashland, and its name “Burn” sums up the potent effect it has on its users. When one of her restaurant employees is threatened by dealers of the drug, Gin steps in to set things straight…

I discovered Jennifer Estep’s Spider series about eight months ago and tore through the ten novels that were published to date. Fortunately, Qwill had an advance copy of the newest Poison Promise, and I was so grateful to get my hands on it. Gin Blanco lost her parents and sisters to another elemental in a tragic battle early in her life. She briefly wandered the streets as a young girl until she found her savior and mentor, who trained her to become an assassin. Since the first novel, the Spider has been a different sort of assassin, one who goes after the many villains who populate Ashland, the southern town setting.

Gin also is the owner of the Pork Pit, a barbecue restaurant, and at the start of this latest novel, she rescues one of her waitresses from an attack by a drug dealer. Catalina seems almost ungrateful for the assistance, but unfortunately, the two of them observe the murder of the drug dealer a day later, and Catalina is marked for extinction by the drug kingpin, Beauregard Benson. As usual, Gin is determined to stop him, but even more unusual, Bria, her sister and a police officer, is also determined to bring Benson to justice for killing one of her teen informants. Although usually by the book, Bria is so obsessed with stopping Benson that she seems willing to sacrifice anyone and anything to get him.

One of the elements of the story is a drug called “Burn.” This particular drug has an elemental connection, which Gin eventually discovers after being captured by Benson and injected with Burn. In addition, Benson himself is a different kind of elemental, one that Gin has never encountered. Through it all, Gin also is aware that someone even more evil than Benson is pulling the strings, the newest “Big Bad” to come to Ashland.

Poison Promise had the entire gang to back up Gin – her sister Bria, her lover Owen, big brother Finn, and his girlfriend Roslyn. They each played a critical role in resolving the plot, which is usual in Estep’s stories. In addition, I love the “food pornography” that Estep includes. As a restaurateur, Gin is a fantastic cook, and I love the vivid, detailed accounts of the food that she makes in her downtime to share with her family. I really enjoyed this latest addition to the Elemental Assassin series and hope that Estep keeps writing about Gin and her friends longer still. 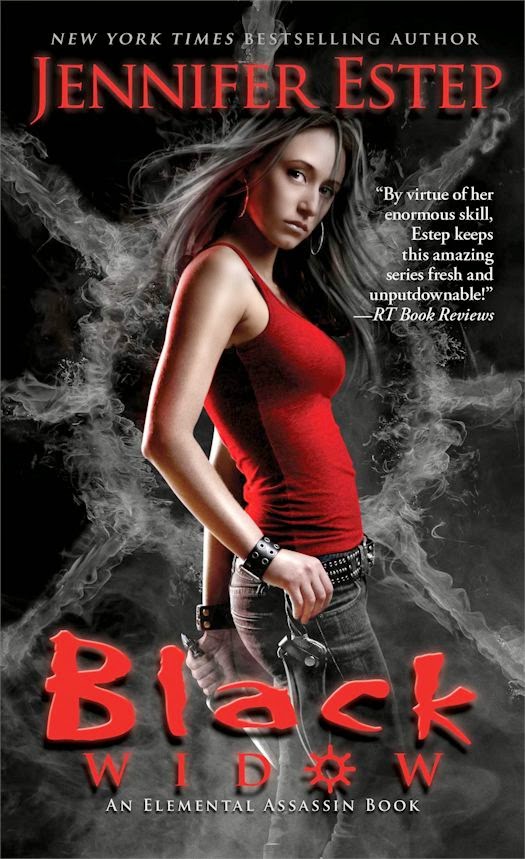 There’s nothing worse than a cruel, cunning enemy with time to kill—and my murder to plan. With wicked Fire elemental Mab Monroe long gone, you’d think I could finally catch a break. But someone’s always trying to take me down, either as Gin Blanco or my assassin alter-ago. Now along comes the Spider’s new arch-nemesis, the mysteriously named M. M. Monroe, who is gleefully working overtime to trap me in a sticky web of deceit.

The thing is, I’m not the only target. I can see through the tangled threads enough to know that every bit of bad luck my friends have been having lately is no accident—and that each unfortunate “coincidence” is just one more arrow drawing ever closer to hitting the real bull’s-eye. Though new to Ashland, this M. M. Monroe is no stranger to irony, trying to get me, an assassin, framed for murder. Yet, as my enemy’s master plan is slowly revealed, I have a sinking feeling that it will take more than my powerful Ice and Stone magic to stop my whole life from going up in flames.

Read more about the Elemental Assassin series at Jennifer's website.

Jennifer Estep is a New York Times bestselling author, prowling the streets of her imagination in search of her next fantasy idea.

Jennifer writes the Elemental Assassin urban fantasy series for Pocket Books. The books focus on Gin Blanco, an assassin codenamed the Spider who can control the elements of Ice and Stone. When she’s not busy killing people and righting wrongs, Gin runs a barbecue restaurant called the Pork Pit in the fictional Southern metropolis of Ashland. The city is also home to giants, dwarves, vampires, and elementals – Air, Fire, Ice, and Stone.

Jennifer also writes the Mythos Academy young adult urban fantasy series for Kensington. The books focus on Gwen Frost, a 17-year-old Gypsy girl who has the gift of psychometry, or the ability to know an object’s history just by touching it. After a serious freak-out with her magic, Gwen is shipped off to Mythos Academy, a school for the descendants of ancient warriors like Spartans, Valkyries, Amazons, and more.

Jennifer has worked as a features writer and page designer for a Pulitzer Prize-winning newspaper and has more than 10 years of journalism experience. She’s a member of Romance Writers of America, Science Fiction and Fantasy Writers of America, and other writing groups.

Jennifer’s books have been featured in Cosmopolitan, Entertainment Weekly, Southern Living, and a variety of other publications.

What:  Two entrants will each win a Mass Market Paperback copy of Poison Promise by Jennifer Estep from the publisher. US ONLY

Who and When:  The contest is open to all humans on the planet earth with a US mailing address. Contest ends at 11:59PM US Eastern Time on July 29, 2014. Void where prohibited by law. No purchase necessary. You must be 18 years old or older to enter