Please welcome Shane Berryhill to The Qwillery. Bad Mojo, Shane's latest novel, will be published on July 28th by Ragnarok Publications. Shane will be hosting a release party on Facebook and says "It’s free and open to you and your friends, dear reader. Come one, come all. The more the merrier." 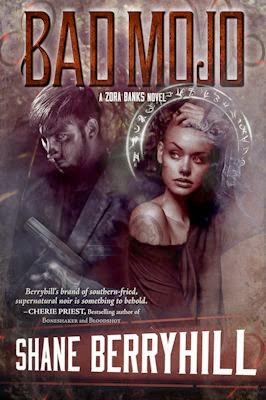 Shane:  Happy to be here, Qwillery and Co. My first serious attempt at writing was after the turn of the millennium. I’d finished reading a novel by a best-selling author. One that turned out to be pure schlock. I tossed it aside and thought, I could do better than that. After further consideration, I decided to try. Ultimately my first novel from Macmillan/Starscape, Chance Fortune and the Outlaws, came about as a result.

Shane:  Plotting and seat-of-the-pantsing are railroad tracks for me. I usually have a vague chapter outline. Ergo, “this has to happen in this chapter and this in the next” and so on and so forth. But how I get from “Point A” in the chapter to the desired “Point B” is totally organic. I simply place my rumpus in the chair and start typing. Rinse. Repeat.

Shane:  I don’t necessarily have a “constant” in that regard, but, when working on BAD MOJO, I had a long break between writing the first half of the book and the second. There’s a turning point midway in the story where redneck-pretty boy-wereperson, Ash Owens, has to tuck his tail (pun intended) and go groveling back to his friend and partner, beautiful-conjure-woman-of-mixed race, Zora Banks, at her place of business. I knew in my gut that what I had planned for Zora’s base of operations wouldn’t work. It took me a long time to figure out what Zora’s home base needed to be. When I did, it was off-to-the-races at the keyboard, again. I’m not sure I believe in “writer’s block,” but it admittedly took my conscious mind a while to hear what my subconscious had been trying to tell it all along.

Shane:  Charlie Huston (and his (vampire) Joe Pitt series) was admittedly a huge influence on BAD MOJO, as was Jim Butcher, James Sallis (I’m thinking, Drive), and dozens of other pulp-noir authors, Joe R. Lansdale not least among them (If you pay attention, you’ll come across a tip-of-the-hat to Papa Lansdale in BAD MOJO). Even Cormac McCarthy. I love hardboiled, no-nonsense prose. The leaner and meaner, the better.

Shane:  BAD MOJO is a story love and murder among the men, women, and monsters of a supernatural South.

TQ:  Tell us something about Bad Mojo that is not in the book description.

Shane:  There’s a bar featured in the novel, The Stone Lion. It was my favorite haunt (pun, again, intended) during my twenties. I lived in an apartment building nearby and often walked over by myself, knowing without a doubt there be someone there—likely someone I’d never met before--with whom I could share a good drink and good conversation. It was just that kind of place. Alas, it is no more.

TQ:  What inspired you to write Bad Mojo?

Shane:  You ask the question as if I had a choice, haha. The short, honest answer is, because I had a story to tell. One that refused to be ignored.

TQ:  What sort of research did you do for Bad Mojo?

Shane:  BAD MOJO is set where I live, Chattanooga, TN. To write the novel, I delved into the Nooga’s past. But in all honesty, I threw out or changed as much as I kept. To quote Stephen King, “Never let the facts get in the way of a good story.”

Shane:  BAD MOJO is told through the eyes of redneck-pretty boy, Ash Owens. I’m admittedly not very pretty, but I am little red. One thing’s for sure: we’re both smartasses. As a consequence, Ash just bled out of me. By contrast, Ash’s partner, Zora Banks, is wise, kind, and capable. Everything Ash and myself are not. I wouldn’t have been up to the task of writing directly from her point-of-view. I needed the window of Ash to showcase her awesomeness.

Shane:  My first creator-owned comic, SHERWOOD, TEXAS (reimagining of Robin Hood as a biker gang epic), is currently in shops, so the second story arc is in the works, along with a couple of other graphic projects I’m pitching to publishers. I’ve got a scifi short story titled BURN (a “nonsequel” to Bradbury’s Fahrenheit 451) that’s made it past assistant editors up to the E-n-C of a prominent scifi ‘zine. The third book in the Chance Fortune series, CHANCE FORTUNE OUT OF TIME, releases this fall from Crossroad Press. The good folks at Crossroad don’t know it, yet, but I’m about to throw a second unrelated young adult novel their way. Then, I hope to contribute Ragnarok Publication’s MECH: AGE OF STEEL anthology. And of course, I see BAD MOJO as the first novel in a series, so look for more tales of mystery, murder, and monsters from Zora and Ash.

Shane:  Much obliged. I hope your readers dig BAD MOJO. 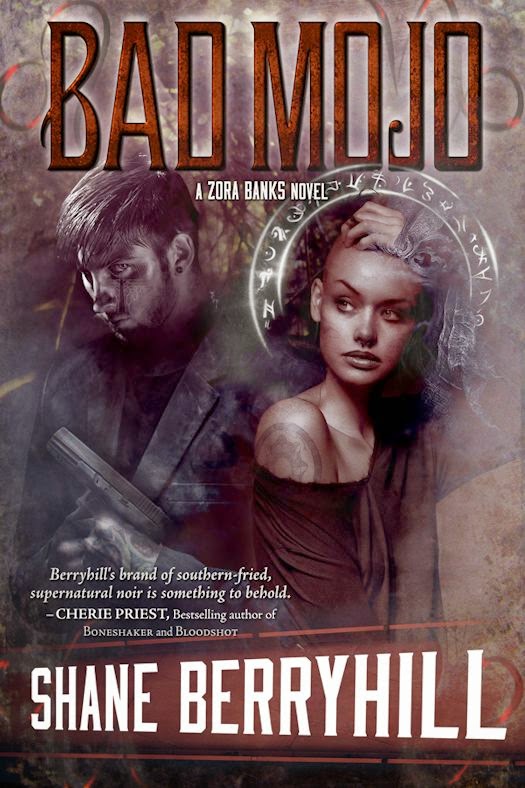 "Berryhill's brand of southern-fried, supernatural noir is something to behold." –Cherie Priest, bestselling author of Boneshaker and Bloodshot

BAD MOJO is a tale of love and murder among the men, women, and monsters of a mystical, modern-day South.

When Tennessee State Representative Jack Walker hires Ash to find his missing, drug-addicted wife, Ash finds himself at odds with Chattanooga’s various underworld gangs--both the living and the unliving--as he and Zora become embroiled in a far-reaching occult organization’s grab for ultimate power. 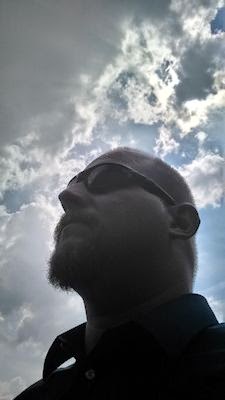 Shane Berryhill is a novelist and comic book writer. His work has been praised by Publishers Weekly, NPR, NBC Today.com, Wired Magazine, Horror World, and others. He's been a guest and speaker at events ranging from the National Council of English Teachers conference to San Diego Comic Con. Find Shane online at www.shaneberryhill.com, Facebook, and Twitter.