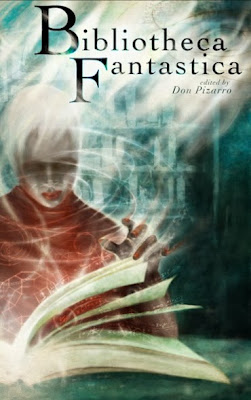 When we put together the fantasist anthology, Bibliotheca Fantastica, we asked ourselves, “What’s so magical about books, anyway?” Today, several authors from the anthology have answered that question for us.


“Were you saying things that you heard in your mind from just looking at that book?”
- Walter Tevis, Mockingbird

That’s a part of why I write—the hope that something I wrote may touch someone after I’m gone. A reader might laugh at my thoughts about alien life or water on Mars, and still be touched by my words about love, loss, or sacrifice.

Or the other way around. Perhaps when our twenty-first century values and emotions are quaint and passé, my insights about sorcery might speak to a reader. Either way, a person from now and a person from then can be part of the same conversation, because someone put the words down in a book.


Gord Sellar, author of “The Rite”:

Magical? Books are virtually necromantic. They don't merely preserve ideas, but also voices, entrapping them on paper, vellum or papyrus as one might trap a sacrificial offering in amber, the breath of life still caught in its soft, vulnerable throat. Translations, especially, are harrowing necromantic rituals: Odysseus had to dig a cleft in the earth and pour blood straight from the slashed throat of an ewe, mingled with milk and honey, to hear the dead speak... but if we want to hear those faint voices, we just head to the library, and there they are, set out before us like jugs of blood-laced wine for the tasting. Those who steep themselves in this sort of magic--by spending time listening to the voices of the dead, or by practicing the entrapment their own voices in the shadowy lines of ink that stain page after page--are helpless to resist the changes wrought within them by these necromantic things that we today strew about without a second thought.

Books are time travel. They're telepathy. They're the seance, the ansible, the summoning ritual, the oracle, the visionary dream. Reading makes another person's ideas our own, for better or worse, as different, far away or long ago as that other person might be. The connection isn't perfect--what magic is? But what's lost in the translation from one mind to the page and back into another's leaves room for the creativity that makes the next book possible, and the next. If only we could read them all.

Everything about books is magical - from the sound the pages make as they're turning, to the promise of a whole new world lying in wait between the covers. An unopened book is full of endless potential, and the best books, once you do open them, fulfill that whispered promise by taking you on a journey, introducing you to characters who end up feeling like friends, and making you see the world - at least briefly - in a completely new way

They remind us of places we've never been and times we haven't lived in.


Ray Vukcevich, author of “The Go-Between”:

We are matter that looks at and thinks about the universe and then tells stories. How that all works and why we should make up stories are deep mysteries, but that's what we do, and while it might not really be magic, it is wonderful. As we change in the coming ages, if we survive, the way we tell those stories might change, too. When we augment those most complicated of things, our brains, new art forms will probably arise. At some deep level, though, I think it will still be narrative, because that's who we are. We struggle to make sense of things and then we say stuff. Some of the most interesting things we say are collected in objects called "books."

My favorite and most heartbreaking dreams are the ones where I'm in a library or old junk shop and I stumble on a book by a beloved author that I didn't know existed. I know where this comes from--when I was little I was obsessed with the Wizard of Oz. I thought there was only one book, but then in my Scholastic flyer from school I boggled as I saw an advertisement for #2. In our local bookstore sometime later I found 3, and eventually all the L. Frank Baum ones through 14. Several years later I was in the Topeka library and the same thrilling shock ran through me as I found the ones by Ruth Plumly Thompson. Each of these moments is incised in my memory. The books themselves were magical, but the unexpected discovery that you could, in fact, go back to Oz (or Narnia, or Green Gables, or or or) was always the real magic.

Books are a beautiful chimeric species, similar in form and diverse in function. They are portents to other more exciting and more terrifying worlds, and adjust the lens through which we view our own. They introduce us to characters who shape us. They mutate our language. They can be escapes, journeys, companions, heartbreaks, archives, or exorcisms. Books are time capsules and historic records, though it often seems that fiction books contain more truth than those filed books in the 000-999 shelves of the library. But their most important power is to inspire. At their best, they move us to learn, question, and create.

I remember, many years ago, still living at home, working on my first novel project when my father came in. He stood beside my desk reading the dozens of sticky notes on the walls, jots of notes and quotes and fragments of chapters to be. 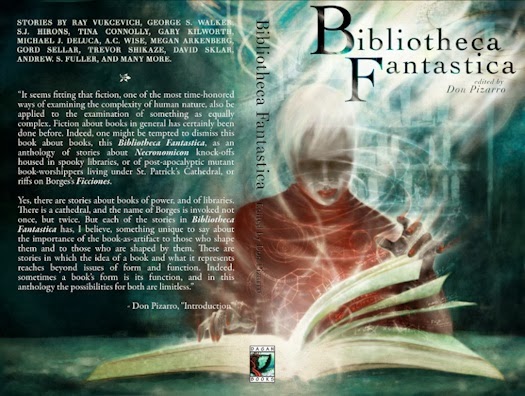 Bibliotheca Fantastica, edited by Don Pizarro and with a cover by Hugo award-winning artist Galen Dara, is out now from Dagan Books. Order it online at Amazon, Barnes and Noble, Weightless Books, and direct from www.daganbooks.com.