Please welcome Skyla Dawn Cameron to The Qwillery as part of the Demons of Oblivion Blog Tour! 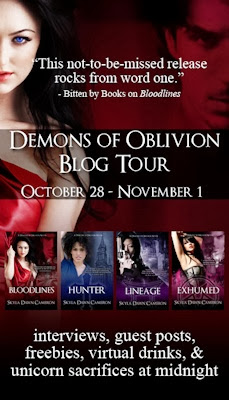 Her gaze was dark and dangerous. “I can help,” Peri whispered.
“Your magic suddenly isn’t blocked?”
Her lips set in a straight line. Well, there was my answer, but she still argued. “I don’t need demon magic. I was a fucking mercenary.”
“And now you’re a lesbian* graphic designer who lives in the suburbs with your pacifist girlfriend.”
- Exhumed


The above exchange is from my novel Exhumed, the fourth book in the Demons of Oblivion series. It’s narrated once again by Zara Lain—whose first book was Bloodlines—but the major players in the novel are from the previous two books.

Peri Takata came in to play during the third book, narrating Lineage. She was a hardened mercenary and quarter-demon, whose family—a husband and their twins—had died in Japan several years earlier in an attack meant for her. She was violent, homicidal, and suicidal. As one reader put it, only guilt was standing in the way between her and true sociopathy.

Spoiler alert: Peri doesn’t die at the end of Lineage as she planned to. Instead, she did the very last thing she ever expected to do: she fell in love. With another woman.

Nicolette was introduced in book two, Hunter. She’s a pacifist-ish vampire; despite having the strength and speed of any other vamp, she doesn’t fight. (No, my vamps aren’t like Buffy’s where they awake with inherent kung fu mastery. They have no more innate skills than the average person.) I’d been thinking ahead by this point, always intending to have her as a potential love interest for Peri in the third book.

Then along came the third book. And...I had no idea what would happen.

Chapter after chapter went by. Peri didn’t soften. I wasn’t sure if she even liked girls. Or people at all. 99% of her thoughts were about killing and/or maiming either those around her or herself. Now, I write urban fantasy, not romance. The book didn’t need a love story to work. But I’d woven Nicolette in thinking things would head in this direction and I started to panic. What if this didn’t work? What if Peri, like, killed everyone? What if I’d spent this time building up Nic only to have her...not get to do anything useful?

Still, I kept typing, flinging myself into the darkness and trusting the story to catch me.

I nodded. “I just...think I can’t. Ever.” I was opening up to her more than I’d opened up to anyone, talking like I would a counselor though I’d seen a dozen of them over the years and I hadn’t remarked on anything outside of the facts in my file. Why she solicited such a reaction in me, I didn’t know, but it was like my scalp flopped open and she could already see the thoughts inside. “That part in me is...broken or something.” Dead. Blown up in the building with my kids and Ken. Grief was a raw, open wound again, bleeding all around me. I didn’t deserve to be here. Didn’t deserve the breath filling my lungs, the moments that passed. I didn’t even deserve Nicolette’s help, or her quiet, undemanding sympathy.
“I think,” she began with care, vague French accent lilting and sunny, “that sometimes you only realize you’ve been in the light when it goes dark once more. If you seek out that light again, perhaps you’re not entirely broken.”
- Lineage


It surprised me, despite hoping things would go this way, that little by little Peri thawed. She saw in Nic what I’d hoped the reader would as well: a bright spot of light in a dark room. Though on the surface they seem a case of opposites attracting, deep down they were more similar than even I’d realized: both had lost someone, been changed and damaged. Both were made up of scar tissue. The difference was in how they reacted to grief: one shut down completely, hating the life she had while her loved ones were gone; the other struggled but coped, putting one foot in front of the other and living for what was lost, not in spite of it.

In the end, Peri was still Peri. There were no declarations of love. No particularly intimate scenes. No plans for wedded domestic bliss. But there was potential. There was a light at the end of the tunnel for both of them.

And I’m glad they found each other. It would’ve halted the series pretty quickly if Peri had killed everyone after all.


* Peri is not a lesbian; she’s bisexual. Zara knows this but she doesn’t give much thought to things outside of her own sphere. People with a bisexual orientation often find themselves erased from dialogue or treated as if they don’t exist, and I did want to acknowledge here the reason for Zara’s misnomer. 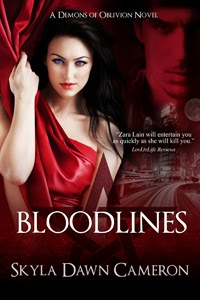 If you're in her way, it sucks to be you.

After three hundred years of unlife, narcissistic vampire Zara Lain has seemingly done it all, and she's now making a living as a successful thief-turned-assassin. Her newest assignment seems simple enough: kill the aging leader of the O'Connor coven and his only heir, and she'll have another ten million in the bank. But in the dangerous world of the supernatural, few things are ever “simple.”

When a massive assault decimates the continent's population of powerful witches and warlocks, and its orchestrator has vampires being hunted down and captured, Zara realizes the tables have turned and now she'll be playing the hero. Forced to join with a smart-mouthed fellow vampire, a demonologist who's also a fan of hers, a recently widowed—and frequently brooding—warlock, and her best friend's mom, Zara's grudgingly willing to do what she can to save the day.

If only people would stop ruining all her outfits...

Warning: contains heavy doses of snark, a sexually confident heroine who likes killing people and has no secret heart of gold, lots of explosions, and very naughty language. 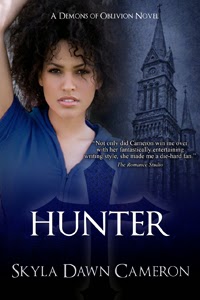 Sometimes natural predators need to be kept in check, and for that, there's Ryann David. Orphaned as an infant and raised by an exiled branch of the church to become a warrior for God, she and her fellow members of Venatores Daemonum have trained all their lives with only one purpose: destroy all demons in the mortal realm.

But when Ryann and her team are sent to hunt down a vampire who has killed one of their own, a new world of danger, betrayal, and conspiracy greets her. Allied with an irreverent psychic detective and the very monsters she was raised to kill, Ryann will risk everything—her life, her faith, and her heart—in pursuit of the truth as the black and white existence she knew turns a murky shade of gray.

Warning: This book contains a demon-hunting nun. No, really. And she doesn't swear. At all. This might be quite traumatizing to you after reading Bloodlines. Reader discretion is advised. 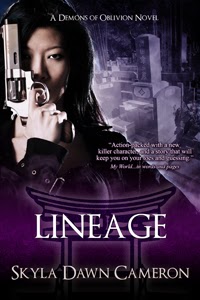 What’s a woman to do when her dad’s the antichrist, her grandma’s the devil, the end of the world is at her doorstep, and she’s out to avenge the murders of her husband and kids?

Kill everything in her way.

Quarter-demon Peri Takata exists with but one goal in mind: annihilate everyone responsible for the death of her family. Then—her need for vengeance quelled—she plans to take her own life.

Her mission brings her to vampire Zara Lain, the only known survivor of the event that destroyed Peri’s family five years ago. Hunting down a secret society of those who don’t want to be found has its challenges, however, especially when forces are working to keep the antichrist’s daughter very much alive. The apocalypse is closing in and Peri may be playing a role in it whether she wants to or not.

And when a heart long-thought dead begins to beat again with love for another, she’s not so sure about anything anymore.

Warning: You’re still here? After the narcissistic assassin in Bloodlines and the demon-hunting nun in Hunter? Well, now you get a sociopathic, quarter-demon mercenary. There’s lots more violence and naughty language in this one. You're welcome. 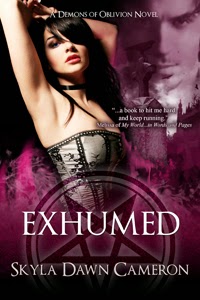 Zara Lain, narcissistic vampire and assassin, cleaned up after a crazy warlock tried to build a vampire army, made some cash when the North American covens were left in shambles, got away when framed for the murder of a Demon Hunter, and dealt with some idiots who tried to jumpstart Armageddon. None of that could prepare her, however, for the moment when her lover of the undead persuasion awakens...

And promptly tries to kill her.

She’s raised a handful of orphaned baby vampires during the past six years and she knows the score: if they don’t get sane again, they have to be staked. And even if she can fix her would-be boyfriend, he’s not the only formerly deceased one in town who wants to kill her. Old enemies are back to put a cramp in her love life, ruin a good pair of heels, and just maybe end the world.

An apocalypse is nigh...and it gets a lot worse than having nothing to wear to the occasion.

Warning: This book may cause you emotional turmoil and feelings of great pain. I'd apologize but it would be a lie; I feed on your tears. Keep 'em coming.

More about Demons of Oblivion 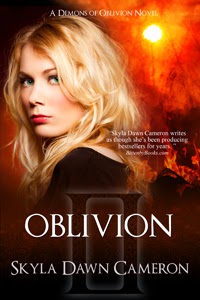 Side Stories and Novellas: 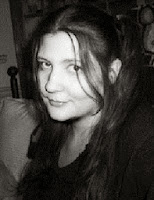 Her early storytelling days were spent acting out strange horror/fairy tales with the help of her many dolls, and little has changed except that she now keeps those stories on paper. She signed her first book contract at age twenty-one for River, a unique werewolf tale, which was released to critical and reader praise alike and won her the 2007 EPPIE Award for Best Fantasy. She now has multiple series on the go to keep her busy, which is great for her attention deficit disorder.

Skyla is a fifth generation crazy cat lady who lives in southern Ontario, where she dabbles in art, is an avid gamer, and watches Buffy reruns. If she ever becomes a grownup, she wants to run her own pub, as well as become world dictator.

You can visit her on the web at www.skyladawncameron.com. When she’s not writing or being glared at by cats, she’s probably on Twitter. You should ping @skyladawn and tell her to get back to work.