Guest Blog by Jonathan Strahan - On putting together an anthology, or what went into Fearsome Journeys - June 19, 2013 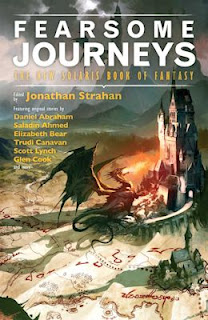 On putting together an anthology, or what went into Fearsome Journeys

First of all, I’d like to thank The Qwillery for hosting this stop on the Fearsome Journeys blog tour. It’s a great blog and I’m thrilled to be here.

Most people I talk to about editing anthologies don’t have a clear idea of what an anthology editor does or how you go about putting an anthology together. Seventeen years ago, when I started work on my own first book, The Year’s Best Australian Science Fiction and Fantasy, I only had a vague idea of what was involved. It took trial and error and a lot of advice from friends like Jack Dann, an experienced and award-winning editor I’d gotten to know when he moved to Australia, to work out what I needed to do and, even though Fearsome Journeys is my thirty-sixth anthology, I’m still working it out.

Let me start, though, with the answer I give at cocktail parties. Being an anthology editor is like being an independent movie producer, or what I imagine being an independent movie producer must be like, though on a small scale. As editor you’re responsible for everything, or at least if feels like it you are. You come up with the idea, you get creative people (the writers) excited about it so they’ll agree to be involved, you assemble a pitch to put to publishers so they’ll support the book, you do the deal so the book’s possible, you shepherd everyone towards delivering a final manuscript to your own editor, you make sure it’s as good as it can be, you work on the sales and stuff with the publisher so the book gets out to readers, you get everyone paid, and then, when it’s done, you try to keep that book alive while you look for the next project to work on, because there’s always a next project (for example, I’m already working on a follow-up to Fearsome Journeys).

That’s the short-hand for what I do, but I don’t know if it gives you much of an idea what it’s like or how you go about it. Fearsome Journeys, for example, started out as a discussion with Jonathan Oliver, my editor at Solaris Books, about what we might do to follow Engineering Infinity, a successful science fiction book we’d just done together. We knew it would be fantasy, and that it would be “mainstream fantasy”, by which we meant real core genre stuff, rather than literary mainstream.

The book started life as Reap the Whirlwind, and was inspired by a spectacular cover Raymond Swanland had done for a Glen Cook book that I’d seen recently. I loved the energy and drive in it, and it seemed to fit emotionally with what Jonathan and I had in mind. I felt we were looking for something not too far away from Swords and Dark Magic, a sword and sorcery anthology I’d edited a few years earlier with my good friend Lou Anders, so I started out by asking some of those authors if they’d like to be part of this project. Several had commitments that prevented them being involved, but Glen Cook, Scott Lynch, Jeffrey Ford, and K.J. Parker were on board. I also asked Saladin Ahmed, whose terrific debut novel Throne of the Crescent Moon I’d just read, to be part of the book, along with people I’d wanted to do work with for some time like Kate Elliott, Robert V.S. Redick, and so on to come on board.

Choosing who you’ll ask to be part of a book is critical, because it shapes the final book. I always want a core group of writers who are really closely identified with the kind of book I’m trying to do, then a few sideways choices. When Jeffrey Ford wrote for Swords and Dark Magic it surprised some people because he’d not written sword and sorcery before. Asking Ellen Kushner to write for the book was an easy choice, given her sly and witty novel Swordspoint, but asking someone like Ellen Klages, who is a marvelous writer but hasn’t written anything like this before is all about stretching the book. It works.

From there, once everyone’s in, it’s a matter of waiting for stories. In this case, nearly a year passed before the first stories came in. This is the most nerve-wracking part of being an anthology editor for me. Will you get stories? Will they be great? From the moment K.J. Parker’s “The Dragonslayer of Merebarton” hit my email inbox I knew the book was going to be great. My role from their was to be the best reader I could for the stories, nudging them here and there as editor to be the best stories they could be by working with the author with suggestions for improvements or in some cases, just by making sure we had clean copy. Once I had the stories, there was an introduction and story notes to write. They’re always a bit of a chore for me, but I think they give the book shape. When that’s done, there’s assembling the manuscript. I think an anthologist is a little like either a maker of mosaics building a picture out of pieces or someone making a mixtape for a friend. A book needs rising action, it needs pace and shape, it needs variety in theme and rhythm, and it needs to both invite you in and tell you what it’s about.

What does that mean? Well, it means picking the story to open the book that you think will both engage readers the most, but making sure it’s one that readers will expect to find in the book they’ve done. In Fearsome Journeys I knew I needed an immediately engaging story that was full of color and adventure, and that was exactly what you expected from the cover. That’s why Scott Lynch’s “The Effigy Engine” opens the book. It was perfect. I then look at the book closer, one that will give you the right feeling when you get to the end of the book, and Daniel Abraham’s “The High King is Dreaming” does a great job of being that story. I then look to interchange length and theme, while trying to put something special right in the middle of the book.

Once that’s all done, and I know how the book should read, I put together the manuscript and get it off to my editor. This is always a nerve-wracking thing because, while I always know my writers have done a great job, I always lose confidence in what I’ve just done. Happily, the Solaris team loved the book and it was done. Tomasz Jedruszek did a great cover, and the book ended up being even better than I’d first imagined.

I seem to have gone on far too long for what is just supposed to be a short blog post, but I really hope it gives The Qwillery’s readers a bit of an idea of what’s involved in putting an anthology together. 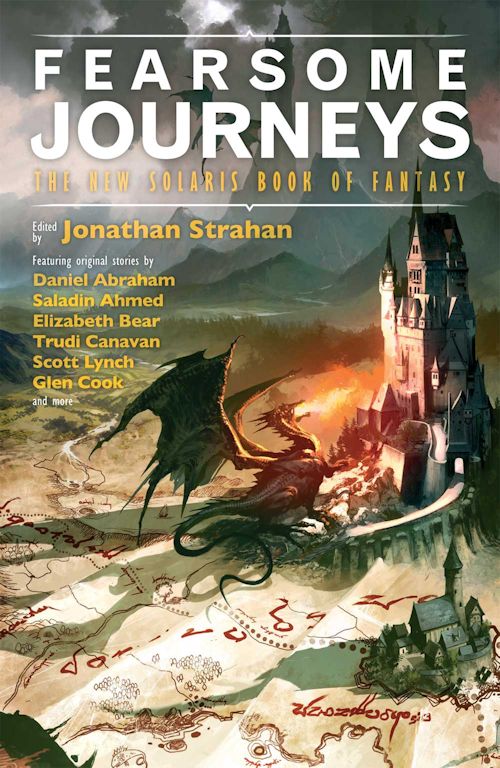 Jonathan Strahan is an editor and anthologist. He co-edited The Year’s Best Australian Science Fiction and Fantasy anthology series in 1997 and 1998. He is also the reviews editor of Locus. He lives in Perth, Western Australia with his wife and their two daughters.

What:  One commenter will win a Mass Market Paperback copy of Fearsome Journeys from The Qwillery.

Who and When: The contest is open to all humans on the planet earth with a mailing address. Contest ends at 11:59 PM US Eastern Time on June 29, 2013. Void where prohibited by law. No purchase necessary. You must be 18 years old or older to enter.