Review - Stalking the Others by Jess Haines - 4 1/2 Qwills 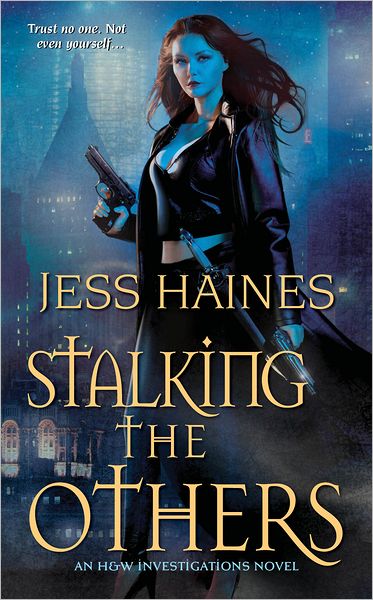 Vampires, werewolves, mages—the Others are very real, and wreaking havoc in Shiarra Waynest’s life. But now, she’s returning the favor…

Once, she was one of the good guys—or as close as a New York P.I. can get. Then Shiarra Waynest was drawn into the world of the Others. Every faction has its own loyalties and agenda. And Shia’s recent betrayal by her ex-boyfriend means that she may be on the verge of becoming a rogue werewolf at the next full moon…

Of course, with all the threats against her, Shia’s not sure she’ll live long enough to find out. The enigmatic vampire Royce wants her back in his clutches, as do two powerful werewolf packs, along with the police. Instead of going into hiding, Shia is enlisting the aid of her enchanted hunter’s belt and every dirty P.I. trick she knows. If she’s going down, she’ll take out as many of her enemies as she can—and hope that in the process, she keeps whatever humanity she has left…

When last we left Shiarra Waynest (Shia) she was out for revenge and an emotional mess. Stalking the Others picks up exactly where the prior novel ended. Shia is after her ex-boyfriend (a werewolf) and members of his pack. She will stop at nothing. Her overwhelming desire for revenge drives the plot and her actions throughout almost all of Stalking the Others. Her lust for revenge pushes her to make decisions and alliances that under other circumstances she probably would have avoided. She’s not letting Others dictate to her anymore. She’s changed from the beginning of the series. It makes for engaging reading!

I like Shia even in this perpetually somewhat unhinged state. She is the center of the story with very little support and carries the story well. We get insights into other characters we’ve previously met through their interactions with her. She’s worried about her best friend, Sara, and what the vampires who should be protecting here might have done to her. She’s hunting down her ex’s pack who have gone into hiding. She’s also confronting the fact that she might become Other (werewolf) at the next full moon. To add to her stress she’s wanted by the police.

The enchanted hunter’s belt that she wears is a fascinating artifact. In Stalking the Others we learn its origin and its capabilities. The belt gets high marks for creepy.

Alec Royce, the vampire to whom she’s contracted, is present in the background until the last 3 chapters of the novel. I don’t think I’m going to forget the last chapter of Stalking the Others anytime soon. It’s really good!

Jess Haines cleverly subheads the first 24 chapters with the amount of time left until the full moon that will seal Shia’s fate. For me that helped add to the tension and sense of urgency in the novel. I counted along with Shia as she moved closer and closer to that fateful full moon. I watched as she became more and more reckless and more and more determined to kill those who had hurt her. This is a real page turner!

Stalking the Others is tautly written with plenty of action, dark humor, terrific pacing, and story that kept me on the edge of my seat. I want the next novel in the series now!


I give Stalking the Others 4 1/2 Qwills

I recommend that you read the prior books in the series: 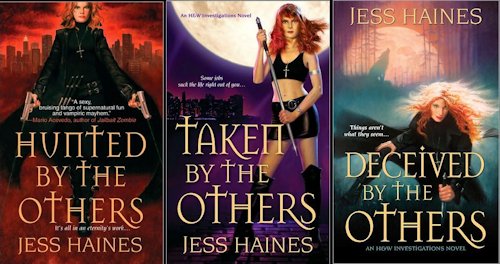