TQ:  Welcome to The Qwillery!

E. J.:  Questions! Answering them? No. Writing quirks? I really don't know. I've never written with anyone but me, so my method seems very sensible from here. I generally don't start writing fiction until about 3 in the afternoon, but that can change if there's a deadline. Does that count?

E. J.:  Well, to plug away for a moment, I'm to be included in an upcoming e-book called MAKING STORY, edited by the excellent Tim Hallinan, in which a slew of crime fiction writers get to mouth off on that very subject. So I'll demure on that question and make people read the book to find out (hint: I'm not a plotter). Not sure when that'll be available for download, but it'll be soon!

E. J.:  Plot, no question. I get character. I love dialogue. I can write funny pretty much at three in the morning if you wake me up (and if so, how did you get into my house?). But making a plot work and having it make sense is always a challenge.


TQ:  Old Haunts is your third Haunted Guesthouse Mystery. What inspired you to write mysteries with paranormal/supernatural elements?

E. J.:  I wanted to read something that had ghosts who weren't all that scary or threatening. I liked the TOPPER series of movies and the TV show, which ran in reruns when I was a kid. I wanted ghosts who would contribute to the story while the focus remained on the living characters. So I wrote that. I've written non-ghost stories, too. I think a writer should try as many things as are interesting to the writer. (Smooth, huh?)

E. J.:  I completely make it up. One of the great things about writing ghosts is that you can make the rules whatever you want them to be. Who can check? So my ghosts can go through solid objects like walls, but they can't see inside walls because, you know, it's dark in there. They can carry objects as long as they're concealed in the ghost's clothing, and some can travel wherever they like, while others can't. Would these things really happen? Probably not. But in my books, I can do whatever I want.


TQ:  What sorts of research have you done for the Haunted Guesthouse Mysteries? What is the oddest bit of information that you’ve come across in your research?

E. J.:  I've done very little research other than a few trips to the Jersey Shore (which luckily is a 45-minute drive from my house), having to watch one--and only one--episode of Jersey Shore, and taking a tour of the Count Basie Theatre in Red Bank, thanks to a very helpful management, for the next Haunted Guesthouse book, CHANCE OF A GHOST, due in February.


TQ:  Tell us something about Old Haunts (A Haunted Guesthouse Mystery 3) that is not in the book description.

E. J.:  It's the only one that I got the title right away. Others have been far more work.


TQ:  In the the series so far who was the easiest character to write and why? The hardest and why?

E. J.:  It's usually easy to write Maxie Malone, the mischievous poltergeist, because she exists almost exclusively to make Alison Kerby's life miserable whenever she can. But they actually do have a grudging affection and respect for each other. Maxie can annoy Alison, but YOU'D better not when she's around. The hardest character to write? No one leaps to mind. I like characters. They continually surprise me.


TQ:  Which character in the Haunted Guesthouse Mysteries has surprised you the most?

E. J.:  Funny you should ask. Probably Loretta, Alison's mom. She was a reaction to the mothers in so many books who always find fault with their daughters, so her shtick was going to be that she thinks everything Alison does is fantastic. And that works, but she's not a one-note character. When I write myself into a corner--which is frequently--I can always summon Loretta, and she'll do something unpredictable to move the story forward.

E. J.:  The eSpecial novella (novellete?) A WILD GHOST CHASE, which is written from the point of view of Paul Harrison, the fledgling PI ghost in the series, will come on New Year's Eve (because that's when everyone stays home and reads e-books, right?), and then CHANCE OF A GHOST will follow shortly thereafter in February. After that? It's between my agent and the world of publishing. I have a few possibilities. 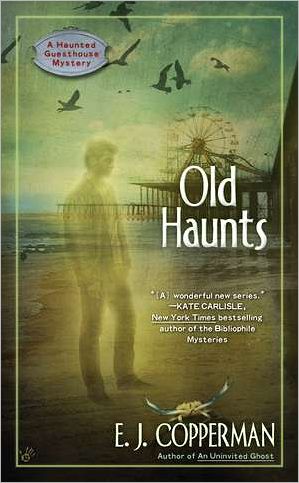 The ghosts haunting Alison Kerby’s Jersey Shore guesthouse are sad. Maxie wants to know who murdered her ex-husband, and Paul pines for his still-living almost-fiancee. The only one who isn’t missing her ex is Alison—because The Swine just arrived on her doorstep... 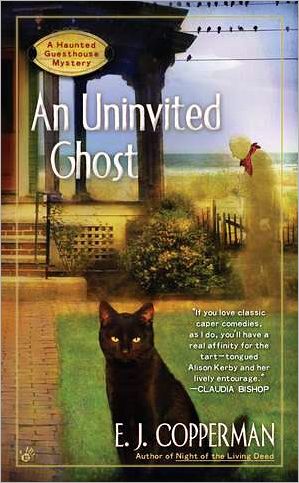 Alison and her resident gumshoe ghost are on their next case when the deceased Scott MacFarlane floats in worried that he accidentally killed a prominent local woman. Turns out she’s still alive...that is, of course, until she’s murdered—in Alison’s house. Now, between the demands of her guests and the arrival of a reality television crew, Alison must find the killer before she sees reality from the other side. 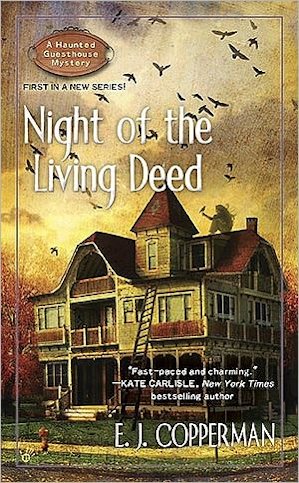 Welcome to the first Haunted Guest House Mystery—the getaway every reader can afford.

Newly divorced Alison Kerby wants a second chance for herself and her nine-year-old daughter. She’s returned to her hometown on the Jersey Shore to transform a Victorian fixer-upper into a charming—and profitable—guest house. One small problem: the house is haunted, and the two ghosts insist Alison must find out who killed them.

E.J. Copperman is a mysterious figure, or has a mysterious figure, or writes figuratively in mysteries. In any event, a New Jersey native, E.J. has written for such publications as The New York Times, Entertainment Weekly, American Baby and USA Weekend. Night of the Living Deed is the first E.J. Copperman novel. It will be followed in 2011 by An Uninvited Ghost, the second in the Haunted Guesthouse mystery series.

E.J., having worked as a newspaper reporter, teacher, magazine editor, and screenwriter, writes stories that combine humor and mystery with just the right amount of spooky supernatural happenings and a large does of Jersey attitude.

Sound like we’re being evasive? Well, the fact is that E.J. Copperman is the pseudonym of a well-known mystery novelist, now embarking on a new type of story that includes some elements of the supernatural as well as a fair number of laughs. And the Copperman novels will have a different attitude, a different setting and completely different characters than anything that has come before, so E.J. really is a new author.