Do You Believe In Magic?
Owen and Hercules are the magical cats in my Magical Cats mystery series. Owen can become invisible whenever it suits him and Hercules can walk through walls and doors—pretty much any solid barrier in his path. Those abilities have helped their owner, librarian Kathleen Paulson, solve more than one mystery in Mayville Heights, Minnesota.

The cats have another special ability that’s part of the story. Kathleen talks to them and most of the time the cats respond—unless there happens to be a particularly tasty batch of sardine crackers around. I don’t mean the cats can actually speak, but clearly they are following the conversation and they’ll do whatever they need to do to get their ideas across to Kathleen. This scene happens early in Copycat Killing:


Hercules suddenly dropped back on to all four feet, looked at the refrigerator door—where I’d stuck the Wisteria Hill feeding schedule—then turned back to me, tipping his head to one side and meowing quizzically. He might have been asking if we had any sardines in the fridge. Or it was possible he was asking if Marcus was okay.

George belonged to a man who lived in my neighborhood. When the man died his wife kept George even though she wasn’t a cat person. George left her house every morning and returned late in the afternoon. He spent a big part of his morning with me. He’d sit beside me on the front steps and we’d talk about everything—politics, baseball, why the rosebushes I planted kept dying. He’d tip his head from one side to the other as though he was thinking about whatever I was saying. Sometimes he’d pucker his face or shake his head. Occasionally he’d put a paw over his nose. And he talked. A lot. George meowed and murped and made growly mumbles low in his throat. He had an opinion on everything. He’d get especially animated when we talked about city council.

When George got sick he started spending most afternoons in the sunshine on the steps. His owner’s son would stop on his way from work and drive George home because he’d be too tired to walk. But George still liked to talk. He still had an opinion about city council and the Boston Red Sox.

True story. The morning the first Magical Cats book, Curiosity Thrilled the Cat came out was cold and snowy. I stood looking out my living room window and noticed fresh cat paw prints in the thin layer of snow covering the front steps. There are several cats in my neighborhood, but none of them ever come and sit on the front steps the way George used to, and certainly not before six o’clock in the morning in February. Still it had to have been one of them, I told myself. How else could they have gotten there? Those small paw prints in the snow weren’t a sign or an omen. There was nothing magical about them. Nothing. 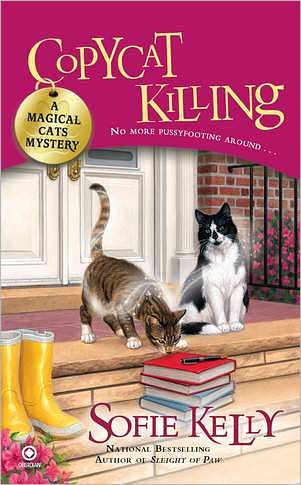 It’s been raining cats and dogs in Mayville Heights. The small town’s been deluged, and now the local artists’ co-op is on the verge of flooding. Kathleen has been up all night helping her friends move their creations to the safety of the upstairs studio.

The artwork survives, but when controversial mask maker Jaeger Merrill is found drowned in the co-op basement, Kathleen questions whether the death was accidental. After she discovers the artist was using an assumed name, she realizes she can’t actually assume anything about him. With the help of handsome detective Marcus Gordon—and her cats’ extraordinary powers of detection—it's up to Kathleen to unmask a killer. Small-town librarian Kathleen Paulson never wanted to be the crazy cat lady. But after Owen and Hercules followed her home, she realized her mind wasn’t playing tricks on her—her cats have magical abilities.

When the body of elderly do-gooder Agatha Shepherd is found near Kath’s favorite local café, she knows Owen’s talent for turning invisible and Hercules’s ability to walk through walls will give the felines access to clues Kath couldn’t get without arousing suspicion. Someone is hiding some dark secrets—and it will take a bit of furtive investigating to catch the cold-hearted killer. 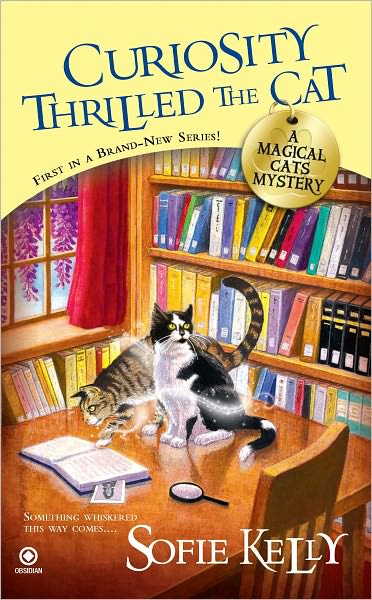 When librarian Kathleen Paulson moved to Mayville Heights, Minnesota, she had no idea that two strays would nuzzle their way into her life. Owen is a tabby with a catnip addiction and Hercules is a stocky tuxedo cat who shares Kathleen’s fondness for Barry Manilow. But beyond all the fur and purrs, there’s something more to these felines.

When murder interrupts Mayville’s Music Festival, Kathleen finds herself the prime suspect. More stunning is her realization that Owen and Hercules are magical—and she’s relying on their skills to solve a purr-fect murder.

Cat Trick (A Magical Cats Mystery 4) is coming in February 2013. 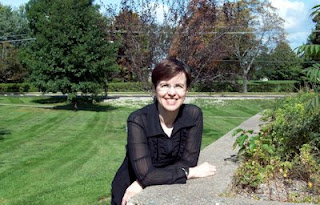