Please welcome Jane Kindred to The Qwillery. The Fallen Queen, the 1st novel in Jane's House of Arkhangel’sk series, was published on December 6, 2011 by Entangled Publishing.

Jane:  I’d have to say the Shower Muse is my most interesting writing quirk. When I’m really stuck and have no idea where to go with a plotline, I take a shower and talk to myself until I have an epiphany. The Shower Muse never lets me down.

Jane:  My favorite fantasy writers are Jacqueline Carey and Lynn Flewelling, and in urban fantasy, I’m a big fan of Allison Pang and Diana Rowland. I think every writer you read influences you to some degree—I read Dostoevsky while I was working on The House of Arkhangel’sk trilogy because I wanted to absorb the Russian feel—but the ones I read when I was a kid probably had the most influence on my writing: Hans Christian Andersen, C.S. Lewis, Piers Anthony, Stephen King, and even Shakespeare—a motley crew if there ever was one. Also, the book Freckles, by Gene Stratton-Porter, was, in a way, the first romance I ever read (it’s a young adult book and not technically a romance—but to me, it was very romantic), and it influenced me greatly. I think it was actually one of my mother’s books from when she was a girl; I can’t quite remember where it came from, but I read it over and over again as a child, and I still have it.

Jane:  Pantser. I do some plotting, mostly in the form of stream-of-consciousness writing to work through problems as I come to them, but for the most part, I prefer to let the story unwind organically. Sometimes I’ll do an outline as I go, though, just to keep track of what scenes have already happened. And I definitely write in a strict linear fashion. If I have a great idea for a scene later on in the book, I just can’t write it until I get to that part. I’m afraid if I skip ahead I’ll never come back to fill in what happens in between.

TQ:  Describe The Fallen Queen (House of Arkhangel’sk 1) in 140 characters or less.

Jane:  An angelic grand duchess seeks sanctuary with demons in Russia after a celestial coup.

TQ:  What inspired you to write The Fallen Queen?

Jane:  I’ve always been fascinated by the Romanovs—the tragedy of their murders, and the persistent belief that Anastasia might have survived. I knew that likelihood was very slim (and the bones of the two missing bodies from the original mass grave where the family was buried have since been recovered), but the idea captivated me anyway.

TQ:  What sort of research did you do to create the world in The Fallen Queen?

Jane:  I researched both angelology and Russian culture, and Russian culture kind of became an obsession. I took a class in it at my local community college, and then I ended up traveling to Russia with the instructor and some of her students for a summer abroad study program to learn the language. I spent a month in St. Petersburg living with a Russian family, and during my stay, I visited the Winter Palace, took trips to Tsarskoe Selo and Petrodvorets, and spent a day in Veliky Novgorod exploring the kremlin and the Yuriev Monastery. All of those places wound up in the book in one way or another. My celestial hierarchy and geography was based on classical beliefs about the Heavens, with some poetic license.

Jane:  The easiest was Belphagor and the hardest was Anazakia. Anazakia is a very private person, very introverted as far as feelings go, and that extended to what I was able to pry out of her to put down on the page. Sometimes it was like pulling teeth. Also, her POV is always in first person, while all of the other characters are in third, and it’s always a bit harder for me to write in first person. It’s very intimate, and as a writer, I feel a bit exposed. So I think in a way Anazakia was hard to write because I share a lot of similar traits with her—keeping people at arm’s length, not trusting people, and not having a lot of confidence in myself.

Belphagor is 180 degrees in the opposite direction. He’s the kind of character who’s constantly poking me on the shoulder and telling me what to write. He thinks everything should be about him. And I love the way his mind works. He doesn’t always think things through, but he always believes he has a brilliant plan. He’s the ultimate pantser.

TQ:  Without giving anything away, what is/are your favorite scene(s) in the The Fallen Queen?

Jane:  My favorite scenes would have to be one that has the word “gluttonously” in it and another involving a birch switch…and I can’t say anything more than that without giving spoilers.

TQ:  How many books, novellas, etc. are planned for the House of Arkhangel’sk series?

Jane:  Currently, it’s a trilogy, but I have a second Arkhangel’sk trilogy in the works, and I can’t imagine being “done” with these characters for a long time.

Jane:  Books Two and Three of The House of Arkhangel’sk are due out in March and June 2012, so I’ll be hard at work on revisions for the next few months. I also have a novella with Carina Press, The Devil’s Garden, that’s a prequel to another series I hope to have published at some point.

Jane:  Thanks for having me and thanks for the great questions!


About The Fallen Queen 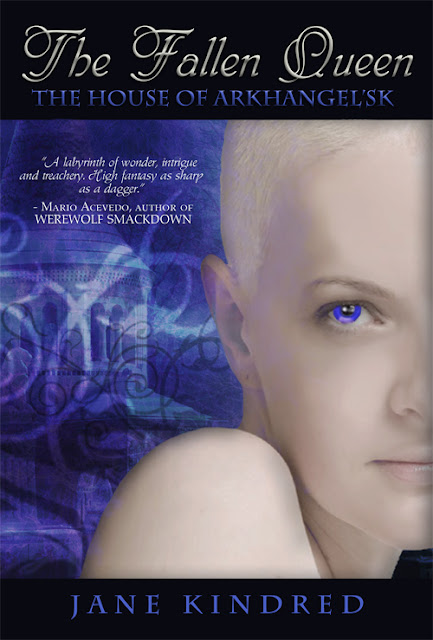 Heaven can go to hell.

Until her cousin slaughtered the supernal family, Anazakia’s father ruled the Heavens, governing noble Host and Fallen peasants alike. Now Anazakia is the last grand duchess of the House of Arkhangel’sk, and all she wants is to stay alive.

Hunted by Seraph assassins, Anazakia flees Heaven with two Fallen thieves—fire demon Vasily and air demon Belphagor, each with their own nefarious agenda—who hide her in the world of Man. The line between vice and virtue soon blurs, and when Belphagor is imprisoned, the unexpected passion of Vasily warms her through the Russian winter.

Heaven seems a distant dream, but when Anazakia learns the truth behind the celestial coup, she will have to return to fight for the throne—even if it means saving the man who murdered everyone she loved.

Jane Kindred began writing romantic fantasy at the age of 12 in the wayback of a Plymouth Fury—which, as far as she recalls, never killed anyone…who didn’t have it coming. She spent her formative years ruining her eyes reading romance novels in the Tucson sun and watching Star Trek marathons in the dark. She now writes to the sound of San Francisco foghorns while two cats slowly but surely edge her off the side of the bed. Jane is the author of The Devil’s Garden (Carina Press/June 2011) and The Fallen Queen (Entangled Publishing/December 2011), Book One of The House of Arkhangel’sk trilogy.

What:  An e-book copy of The Fallen Queen (House of Arkhangel’sk 1) from Entangled Publishing.


Which royal family or royal individual might be fun to fictionalize in a fantasy novel?
Please remember - if you don't answer the question your entry will not be counted.

2)  Being a Follower of The Qwillery.

4)  Mentioning the giveaway on your on blog or website. It must be your own blog or website; not a website that belongs to someone else or a site where giveaways, contests, etc. are posted.

There are a total of 5 entries you may receive:

Please let us know if you have followed Jane and how. Please leave links for Facebook, Twitter, or blog/website mentions.

Who and When:  All humans on the planet earth with an e-mailing address. Contest ends at 11:59PM US Eastern Time on Wednesday, December 21, 2011. Void where prohibited by law. You must be 18 years old or older to enter. No purchase necessary.


*Giveaway rules are subject to change.*
Posted by Qwill at 7:42 AM