Please welcome Jason Heller to The Qwillery as part of the 2012 Debut Author Challenge Guest Blogs. Taft 2012, Jason's debut novel, will be published on January 17, 2012 by Quirk Books.

The fine (okay, accidental) art of genre-busting
By Jason Heller
During his only term as president, William Howard Taft referred to the White House as “the loneliest place in the world.” Believe it or not, he never aspired to the presidency. He was pushed into it by the two strongest forces in his life: his wife, Nellie Taft, and his mentor, Teddy Roosevelt. That’s not to say that Taft wasn’t an ambitious man. It’s just that his ambition lay elsewhere—namely, the Supreme Court. So after being sworn in on March 9, 1909, he found the tight confines of the Oval Office—which, ironically, he built—to be a little chafing. (No, that was not a fat joke.)

This vision of Taft as a man crammed into the wrong place forms the underlying tone of my upcoming novel, Taft 2012. I can’t take credit for the basic idea; my editor, the Hugo Award-winning and benevolently genius Stephen H. Segal, approached me months ago about writing a story around his original concept: William Howard Taft returns to life in 2012 and runs for a second term as president. Having dabbled, coincidentally enough, in a couple of speculative-fiction stories based on electoral politics, I was in.

From there, it became clear that Taft’s real-life, oft-expressed feeling of displacement was going to be mercilessly exaggerated in my book. Mercilessly and temporally: While writing Taft 2012, my references were classic time-travel stories such as Mark Twain’s A Connecticut Yankee in King Arthur’s Court, Washington Irving’s “Rip Van Winkle,” and H.G. Wells’ The Time Machine. (Only in my version of Wells’ cautionary tale, the Democrats are the Eloi, and the Republicans are the Morlocks. I kid! Kind of.)

Another thing that Taft 2012 has in common with its antecedents is this: They don’t sit easily in any one genre. Wells’ novel comes closest, of course; it’s widely considered a work of pure science fiction. But there’s such an allegorical bent to The Time Machine, and such a disregard of hard science, that it’s just as easily classifiable as a kind of Edwardian magic realism. If written today, Connecticut Yankee and “Rip Van Winkle” would be considered some interstitial mix of magic realism and fantasy, maybe with a bit of contemporary folklore and sociopolitical satire thrown in.

Those hazy, hyper-hyphenated categories are all devoured and digested by Taft 2012. (No, that was not a fat joke.) To weigh the plate down ever further, there’s another flavor that makes up the novel: alternate history, which is less a genre unto itself and more of a casserole comprising most of the abovementioned pseudo- and subgenres. Honestly, I didn’t keep track of what genre Taft 2012 might have been wandering into and out of. I was too busy writing the damn thing.

But while speaking with The Qwillery’s kind host, Sally, in preparation for this post, the valid subject came up: What kind of book is Taft 2012 exactly? Is it fantasy? Science fiction? Magic realism? Alternate history? Satire? The clichéd and easy (and true) answer is this: a little bit of all of the above. The odd thing is, I hadn’t fully realized the book’s identity (or lack thereof) while I was writing it. It just sort of… happened. Much like Taft’s presidency.

Although not intentional, all that genre-busting suits Taft 2012 perfectly. After all, William Howard Taft—or at least my broad fictionalization of him—does not fit well into any pigeonhole either. (No, that was not a fat joke.) During his own time, he presided over the era of the Progressive Republican—which, believe it or not, wasn’t an oxymoron back then. And in Taft 2012, Taft is forced to rethink and realign his ideological scale in light of all that’s transpired in America over the last hundred years.

Not to give too much away, but in my book, Taft’s ultimate solution is independence. It’s no coincidence that Taft 2012 is being published now, just as the polls increasingly show that America overwhelmingly supports the establishment of a distinct and viable third party in national politics. In my novel, it’s the Taft Party. And sure enough—like some outgrown suit jacket—a political party specifically tailored to Taft’s generous frame still winds up being a little tricky for him to squeeze into.

No, that was not a fat joke. 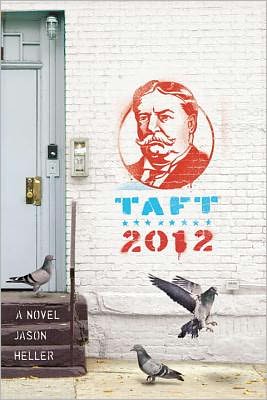 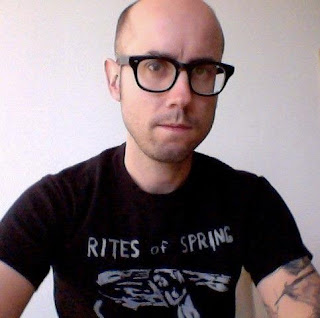 Jason Heller is a Denver-based writer who contributes regularly to The A.V. Club and Alternative Press. Quirk Books will publish his debut novel, Taft 2012, as well as a series of middle-grade horror books (to be announced). He's also the nonfiction editor of Clarkesworld Magazine and is represented by Jennifer Jackson of Donald Maass Literary Agency. 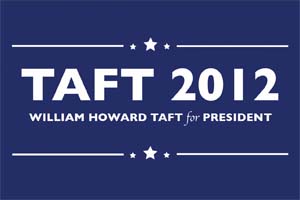