Interview with Gareth Hanrahan, author of The Gutter Prayer


Please welcome Gareth Hanrahan to The Qwillery as part of the 2019 Debut Author Challenge Interviews. The Gutter Prayer is published on January 22, 2019 by Orbit. 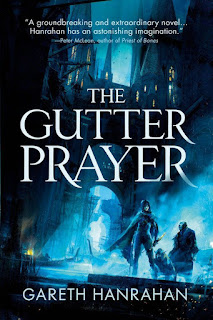 Gareth:  Hmm. When it comes to worldbuilding, pretty much a pantser – years and years of working on roleplaying games means that I’m pretty good at coming up with context and ramifications for whatever weird ideas I want to play with. For narrative, I try to plot more, although I find I need to revisit the plan every few chapters and adjust it based on how the characters are developing.

Gareth:  Unlearning some of the habits I picked up writing tabletop games (in an rpg adventure, you want to avoid dictating what the main characters do or feel, as that’s up to the players). Also, the usual challenge of finding time and energy.

Gareth:  Is it absurd if I say everything? I’ve found the oddest things linger, and become weirdly influential. I randomly picked up a book on Victorian engineering many years ago, for example, and that was a huge influence not only on The Gutter Prayer, but on four or five other projects. You can get wonderful results by paying attention to the most mundane things – old street signs, or animals in rock pools, or whatever – and assuming there’s a magical significance to them.

Gareth:  I’m tempted to use a quote from the book – “fucking fuckers fucked us” – but it’s only four words. “Vengeful rogues amid architecture & stabbings”?

TQ:  Tell us something about The Gutter Prayer that is not found in the book description.

Gareth:  Guerdon’s patrolled by creatures called the Tallowmen – wax monsters created by the alchemists’ guild. Imagine a person made of wax, only their spine’s replaced by a magical wick, and their mind is the burning candle-flame inside their skull. They make the Tallowmen from condemned criminals, and then send them out to enforce the law. Tallowmen burn down over time, they’ve got to be renewed every so often – so the creatures are forced to obey the alchemists in order to win another chance at their horrid existence.

TQ:  What inspired you to write The Gutter Prayer? What appeals to you about writing Fantasy?

Gareth:  I don’t think there was any single moment of inspiration – more a sort of critical mass of ideas. I wrote the first 20,000 words or so for nanowrimo one year without any real clue of where the story was going or what it was for – I rarely find time to write for myself – and came back to it the following year and finished it.

Fantasy – fantasy’s a wonderful set of tools. It lets you exaggerate and concretise elements of the story (the villain can be a literal dark lord on a dark throne), it lets you focus the action on a small number of people (three thieves in a city, or a few Hobbits in a fellowship, can save the world), giving you human action on an epic scale.

Also, you get to make up monsters all day long.

TQ:  What sort of research did you do for The Gutter Prayer?

Gareth:  None for the book itself. But I’d done research for other projects on alchemy, or architecture, or crime in the 19th century, or how secret societies work, so I was able to draw on all that. If you drew a Venn diagram of “non-fiction books Gar has read in the last twenty years”, the Gutter Prayer would be somewhere near the centre.

TQ:  Please tell us about the cover for The Gutter Prayer.

Gareth:  The cover’s a wonderfully atmospheric piece by Richard Anderson, depicting the city and the three thieves, Cari, Spar and Rat. I love the sense of scale it gives – you’ve got these buildings and spires towering over the thieves.

I’ve heard, over and over, from people who say the cover sold them on the book before they ever picked it up. I’m really happy with the cover.

TQ:  In The Gutter Prayer who was the easiest character to write and why? The hardest and why?

Gareth:  Carillon wasn’t necessarily the easiest to write, but she was the most necessary. As I said earlier, my background is in writing tabletop games, where you want to leave space for the players to provide the protagonists. So, I’m really used to coming up with interesting situations, with compelling supporting characters, with villains – but not protagonists who actually do stuff. Carillon’s impulsive and incapable of sitting still or walking away. And once she was in motion, everyone else could react to her, and that made it possible for me to write the book.

The hardest – I had to restrain myself with writing Professor Ongent. He’s in the Giles-from-Buffy role of providing backstory and exposition, and I could write that stuff for years.

TQ:  Does The Gutter Prayer touch on any social issues?

Gareth:  A little. There’s a lot about power dynamics in there, about the gap between high-minded ideals and practical solutions. Several of the people the main characters think of as villains are genuinely – according to their own beliefs – trying to make the world a better place, and have judged the costs worth it. They’re not the only people paying the cost, of course, but that does that make them entirely misguided?

TQ:  Which question about The Gutter Prayer do you wish someone would ask? Ask it and answer it!

Gareth:  Let’s go for “Why did you pick the present tense for the story, instead of the more usual past tense?”

A lot of the story is about delving into the history of Guerdon, into events and secrets that have been buried over the centuries. I wanted the past to feel distant and weighty. Also, the three main characters are, in their ways, very much creatures of the immediate moment. Cari acts on impulse, Rat on instinct, and Spar’s very much aware that his future’s measured in months, not years.

TQ:  Give us one or two of your favorite non-spoilery quotes from The Gutter Prayer.

Aleena sheathes her knife, puts away the gun. “The Keepers sent me,” she begins.
The elder ghoul snarls, angry at the lack of respect. Beyond it, other elders stir from their reverie. Sorcery hisses through the air like mustard gas, stinging Rat’s eyes and nose. He wants to run.
“Buggering monks with their shitty scrolls. Er. I had all this written down,” mutters Aleena, and she tries to recite the correct greeting from memory. The words aren’t meant for human tongues, and she stumbles over them, like she’s trying to gargle with finger bones in her mouth.
The orange-eyed elder unfolds, one obscenely long hoof-footed leg extending down to the cave floor, then another, crushing skulls to powder as it stands up and towers above them. Its jaws open much too wide as it yawns and roars. The elders may be the protectors and priests and gods of their race, but they think nothing of swatting an individual ghoul. Rat cringes in anticipation of the killing swipe.
“Fuck this.”
Aleena blazes with sudden light. Angelic, transfigured, her physical body is a stained-glass case for the burning lamp within. Her voice like choirs of angels.
“I DROPPED THE BLOODY SCROLL, ALL RIGHT? I CAN’T SODDING MAKE NICE.” Every word a resounding trumpet. “BUT NOTHING’S CHANGED. THE BARGAINS YOUR KIND MADE WITH MINE STILL HOLD. I’M NOT YOUR FUCKING ENEMY.” She cocks her head.
“YOU DON’T WANT ME AS YOUR ENEMY.”

Gareth:  I’m frantically working on edits for the second book in the series, entitled either THE SHADOW SAINT or THE DIVINE MACHINE, as well as a bunch of tabletop roleplaying projects ranging from spies-vs-Cthulhu adventures in the 1960s for Fall of Delta Green to Middle-earth material for The One Ring game.

A group of three young thieves are pulled into a centuries old magical war between ancient beings, mages, and humanity in this wildly original debut epic fantasy.

Enter a city of saints and thieves . . .

The city of Guerdon stands eternal. A refuge from the war that rages beyond its borders. But in the ancient tunnels deep beneath its streets, a malevolent power has begun to stir.

The fate of the city rests in the hands of three thieves. They alone stand against the coming darkness. As conspiracies unfold and secrets are revealed, their friendship will be tested to the limit. If they fail, all will be lost, and the streets of Guerdon will run with blood.

The Gutter Prayer is an epic tale of sorcerers and thieves, treachery and revenge, from a remarkable new voice in fantasy.

Gareth Hanrahan's three-month break from computer programming to concentrate on writing has now lasted fifteen years and counting. He's written more gaming books than he can readily recall, by virtue of the alchemical transmutation of tea and guilt into words. He lives in Ireland with his wife and twin sons. Follow him on Twitter @mytholder.