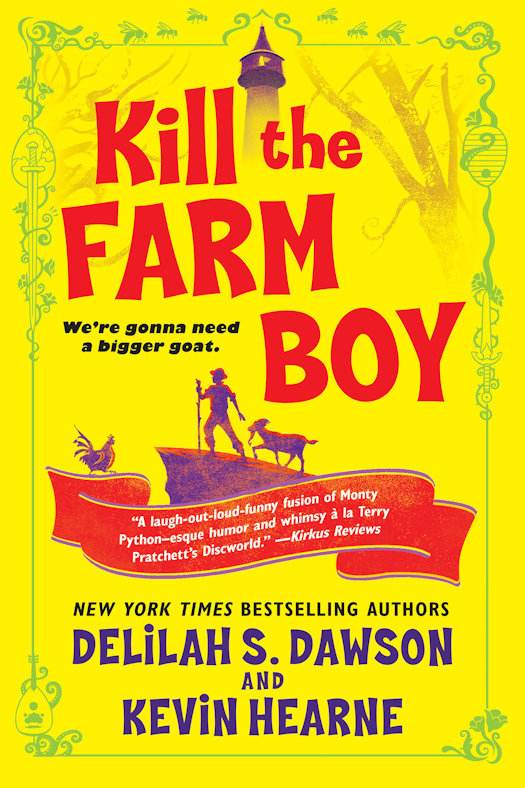 In an irreverent new series in the tradition of Monty Python, the bestselling authors of the Iron Druid Chronicles and Star Wars: Phasma reinvent fantasy, fairy tales, and floridly written feast scenes.

“Ranks among the best of Christopher Moore and Terry Pratchett.”—Chuck Wendig

“When you put two authors of this high caliber together, expect fireworks. Or at least laughs. What a hoot!”—Terry Brooks

Once upon a time, in a faraway kingdom, a hero, the Chosen One, was born . . . and so begins every fairy tale ever told.

This is not that fairy tale.

There is a Chosen One, but he is unlike any One who has ever been Chosened.

And there is a faraway kingdom, but you have never been to a magical world quite like the land of Pell.

There, a plucky farm boy will find more than he’s bargained for on his quest to awaken the sleeping princess in her cursed tower. First there’s the Dark Lord, who wishes for the boy’s untimely death . . . and also very fine cheese. Then there’s a bard without a song in her heart but with a very adorable and fuzzy tail, an assassin who fears not the night but is terrified of chickens, and a mighty fighter more frightened of her sword than of her chain-mail bikini. This journey will lead to sinister umlauts, a trash-talking goat, the Dread Necromancer Steve, and a strange and wondrous journey to the most peculiar “happily ever after” that ever once-upon-a-timed. 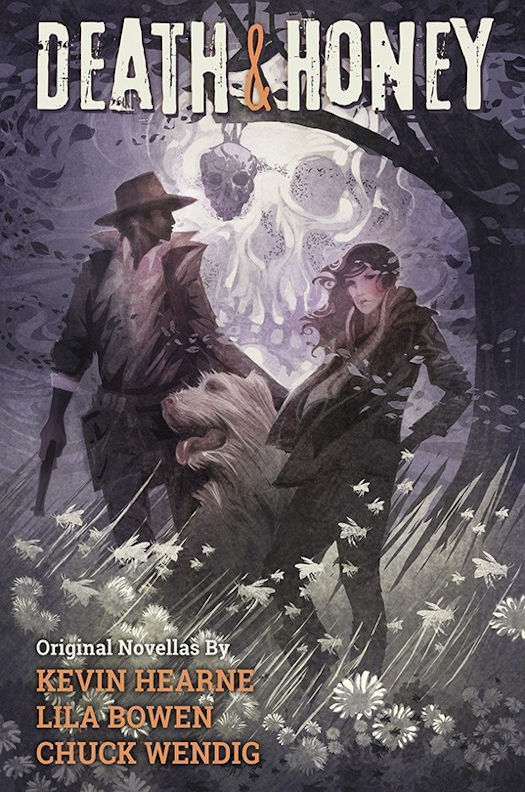 In The Buzz Kill by Kevin Hearne, Oberon the Irish wolfhound and Starbuck the Boston Terrier sink their teeth into a new Meaty Mystery when they discover a body underneath a beehive in Tasmania. It’s been badly stung, but the bees aren’t at fault: This is homicide. The hounds recruit the help of their Druid, Atticus O’Sullivan, and the Tasmanian police to track down the killer in the interest of a reward—but this time, they want more than food and justice.

Grist of Bees, by Delilah S. Dawson writing as Lila Bowen, follows Rhett Walker, who has given up his destiny as the monster-hunting Shadow to settle down with his beloved Sam. But when the call to action grows too strong, Rhett saddles up to follow a peculiar bee into the unforgiving desert. The bee leads him to a weeping mother in a strangely prosperous valley, and Rhett has no choice but to hunt the creature that's stolen her child—even if it destroys a land of milk and honey.

Interlude: Tanager by Chuck Wendig returns us to the world of Miriam Black. Lauren “Wren" Martin is a young psychic woman who can see the stained souls of killers; it is her gift, or as she sees it, her curse. And up until now, it has been her mission to kill those killers, to remove them from the pattern so that they may not murder again. But now, after a death that may not have been deserved, she’s left rudderless, without plan or purpose, until a woman with a strange power of her own takes her in and gives her a new mission—and a new target.

Lettered and Limited Editions available here at Subterranean Press
Note: The eBook edition has a different cover from the Hardcover. 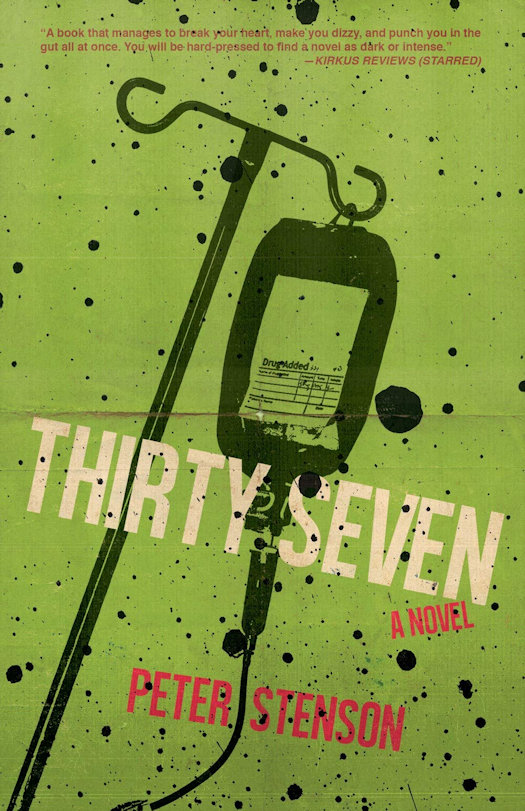 One of Boolist's Best Ten Horror Books of 2018

The Survivors, their members known only by the order in which they joined, live alone in a rural Colorado mansion. They believe that sickness bears honesty. And that honesty bears change. Fueled by the ritualized Cytoxan treatments that leave them on the verge of death, they instigate the Day of Gifts, a day that spells shocking violence and the group’s demise.

Enter Mason Hues, formerly known as Thirty-Seven, the group’s final member and the only one both alive and free. Eighteen years old and living in a spartan apartment after his release from a year of intensive mental health counseling, he takes a job at a thrift shop and expects to while away his days as quietly and unobtrusively as possible.

But when his enigmatic boss Talley learns his secret, she comes to believe that there is still hope in the Survivor philosophy. She pushes Mason to start the group over again—this time with himself as One.

Part Fight Club, part The Girls, and entirely unlike anything you’ve ever experienced, Peter Stenson’s Thirty-Seven is an audacious and austere novel that explores our need to belong. Our need to be loved. Our need to believe in something greater than ourselves, and our ultimate capacity for self-delusion. 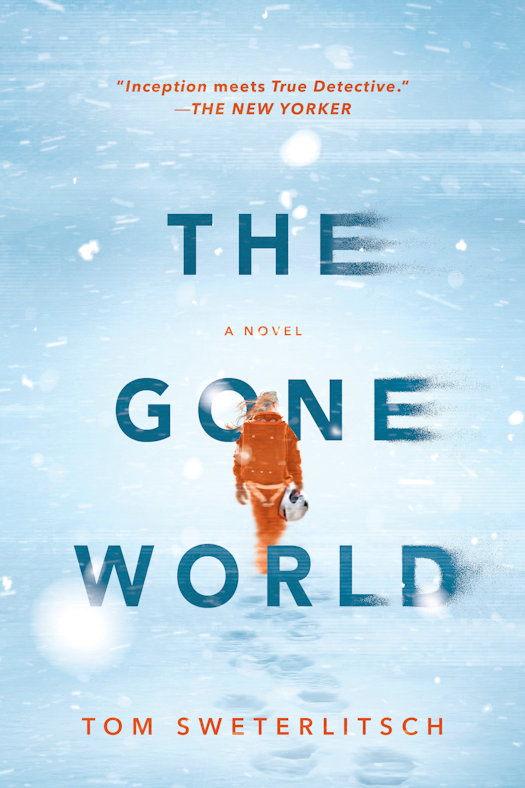 “I promise you have never read a story like this.”—Blake Crouch, New York Times bestselling author of Dark Matter

Shannon Moss is part of a clandestine division within the Naval Criminal Investigative Service. In western Pennsylvania, 1997, she is assigned to solve the murder of a Navy SEAL’s family—and to locate his vanished teenage daughter. Though she can’t share the information with conventional law enforcement, Moss discovers that the missing SEAL was an astronaut aboard the spaceship U.S.S. Libra—a ship assumed lost to the currents of Deep Time. Moss knows first-hand the mental trauma of time-travel and believes the SEAL’s experience with the future has triggered this violence.

Determined to find the missing girl and driven by a troubling connection from her own past, Moss travels ahead in time to explore possible versions of the future, seeking evidence to crack the present-day case. To her horror, the future reveals that it’s not only the fate of a family that hinges on her work, for what she witnesses rising over time’s horizon and hurtling toward the present is the Terminus: the terrifying and cataclysmic end of humanity itself.

Luminous and unsettling, The Gone World bristles with world-shattering ideas yet remains at its heart an intensely human story.