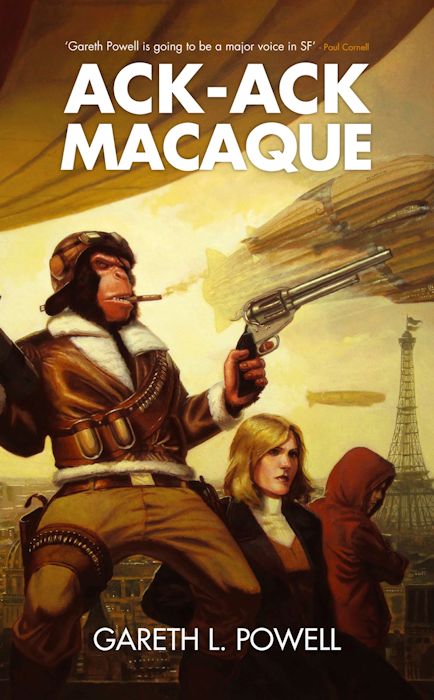 In 1944, as waves of German ninjas parachute into Kent, Britain’s best hopes for victory lie with a Spitfire pilot codenamed ‘Ack-Ack Macaque.’ The trouble is, Ack-Ack Macaque is a cynical, one-eyed, cigar-chomping monkey, and he’s starting to doubt everything, including his own existence.

A century later, in a world where France and Great Britain merged in the late 1950s and nuclear-powered Zeppelins circle the globe, ex-journalist Victoria Valois finds herself drawn into a deadly game of cat and mouse with the man who butchered her husband and stole her electronic soul. In Paris, after taking part in an illegal break-in at a research laboratory, the heir to the British throne goes on the run. And all the while, the doomsday clock ticks towards Armageddon...

I can't remember the last time that I had so much fun reading a novel. Gareth L. Powell has penned a fantastic Alternate History/Science Fiction novel with memorable characters and a wonderfully inventive plot.

As noted in the book description, the novel is set both during World War II and in the latter half of the 21st Century in a world where Great Britain and France are under the British Monarchy*. I found the unified France and Britain concept in the novel extremely well done. It's really easy to accept the what-if of the world in Ack-Ack Macaque.

There is mystery, murder, intrigue, a runaway Prince, and scientists who think they are doing the right thing for humanity (we know where that leads).  The novel moves at a breathtaking pace from place to place revealing ever more about the characters as well as the cause for the murders.

I can't say enough about the title character, Ack-Ack Macaque. He is simply superb. He's a simian of action, a larger than life hero! I adore him. Victoria, the Prince, and the other main characters were all appealing and interesting.  They have difficult choices to make and you will root for them, as I did, to find the killer, figure out what is going on, and hopefully save the world.

There are some lovely touches in the novel - 1) alliterative names (e.g., Victoria Valois, Mindy Morris, and others) that fondly reminded me of comics and some of my favorite childhood cartoon shows; 2) news reports and blog posts, and 3) illuminating chapter headings.

Ack-Ack Macaque is over-the top and action-packed with an ending that is both exciting and ultimately satisfying. Gareth L. Powell has crafted a crisply written, engrossing and very entertaining novel.

A side note: The book includes extras at the end including the short story, Ack-Ack Macaque, that is the first appearance of the monkey Ack-Ack Macaque. It was published in Interzone and then in The Last Reef, a collection of short stories by Gareth L. Powell. I'm also happy to note that a sequel to Ack-Ack Macaque, Hive Monkey, will be coming in 2014!

*As noted in a recent interview with Mr. Powell, "union" talks between the two nations actually took place in the 1950s, but obviously the union did not occur.
Posted by Qwill at 5:37 PM