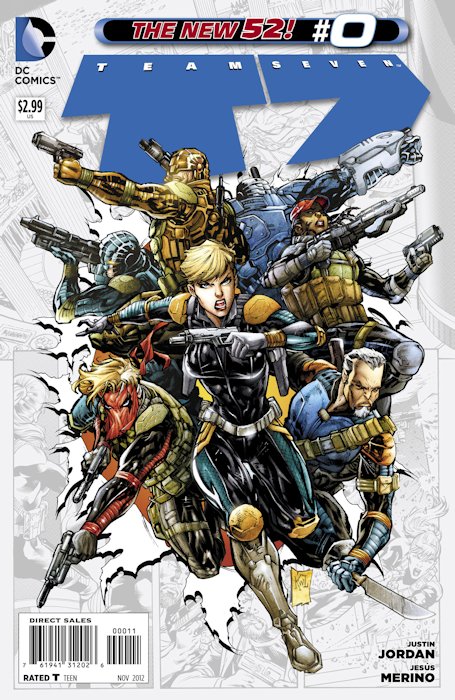 • Threads of the entire DC Universe collide in this new series set in the early days of The New 52 from writer Justin Jordan (The Strange Talents of Luther Strode). • As Superman emerges, so too does the world’s counter measures against him and his kind! • Dinah Lance, Amanda Waller, Steve Trevor, John Lynch, Alex Fairchild, Cole Cash, Slade Wilson are Team 7 – and their story will change everything you know about The New 52!

Written by Justin Jordan, Team 7 is part of the third wave of titles launched for DC Comics' line-wide relaunch termed "New 52". It follows the cancellation of several other titles and happens very much to be a prequel story for several other titles in progress, such as Birds of Prey, Grifter and Deathstroke.

Team 7 is a special forces group brought together by the US military as one of its initial steps to deal with the "problem" of metahumans/superhumans, such as The Flash, Superman, and others. The military considers them too dangerous to be handled by regular special forces (or otherwise) teams, and that is where Team 7 is meant to succeed and pave the way for any and all future steps in the same direction.

Team 7 #0 is somewhat of an odd issue. Justin Jordan's writing is pretty decent, it's just that it is a bit too clinical at times, especially since most of the book is taken up with introducing to all the different characters: Dinah Drake, Kurt Lance, Slade Wilson, Amanda Waller, and all the others who are being brought together. It is a very dynamic issue in terms of content but it just feels too much by the numbers. Where it succeeds though is getting me hooked on to the new title, and a writer I'm completely unfamiliar with. As of writing this review, I've read the next two issues already and the third is waiting to be read.

Jesus Marino, Norma Rapmund, and Rob Hunter are the pencillers for this issue, with Nathan Eyring handling colours, Pat Brosseau handling letters, and Ken Lashley doing the cover. The art, as a whole, is quite good, with clean lines, neat expressive faces, and sensible character anatomy. The fact that the team also has three women operators (Dinah, Amanda and pilot Summer Ramos), and they are all different from each other is another plus. Although, I do have to say that I don't much care for the leaner, fitter Amanda Waller, who is now a svelte-figured field operative rather than the generally plus-sized figure and the one who has always been the "hand behind the throne". It's not how I have known Amanda through the Smallville live-action television series and the Justice League animated series, or any number of animated direct-to-DVD films she's been featured in. And the cover art, it is a little too busy for my tastes with some really hard-edged colours. I expected something... softer, such as the cover for Birds of Prey #0 by Stanley "Argem" Lau.

Overall, Team 7 #0 was a very promising issue and it portends some great things for the series.

Long-time science-fiction and fantasy geek, lover of all things Star wars and Warhammer (mostly all things anyway). Abhinav Jain currently has several works in progress for both science fiction and fantasy in different formats – short story, novella, novel. He is also a book reviewer for The Founding Fields (as Shadowhawk) and a movie reviewer for Just Beyond Infinity. You can follow him on twitter @abhinavjain87 and through his blog.

Find all of Abhinav's Advent Reviews by clicking here.